During the reporting week, the price correction, which started since reaching a new all-time high, accelerated and finally led to a “flash crash” at the end of the week. But first things first. The week started with leisurely trading, marked by narrow trading ranges in the USD 58,000 area. On Tuesday, a trading day with higher prices followed at the beginning, reaching a level of 59,417 USD at the high of the day. However, the price weakened at the close of trading, leading to a slightly lower closing level than the previous day at USD 56,992. The price area around USD 58,000 was marked by resistance, which was formed by the sloping trend line of the respective daily highs since the all-time high. Accordingly, the level was of technical significance and therefore it was not surprising that the market also traded at this level for the next two trading days, with a tendency of slightly lower highs and daily lows. Accordingly, the market closed the day at USD 56,512 on Thursday. Finally, on Friday, the lack of conviction to break the prevailing trend of lower highs since the all-time high, led to retracements that took the price to the important 50,000 support area for the first time at the daily low of 51,655 USD. In the early morning hours on Saturday, this support was broken, which resulted in a short-lived price drop to 42,325 USD at the daily low. However, at the close of trading, the price stabilized back in the USD 50,000 area at USD 49,200, and trading on Sunday was also largely in the USD 49,000 area. 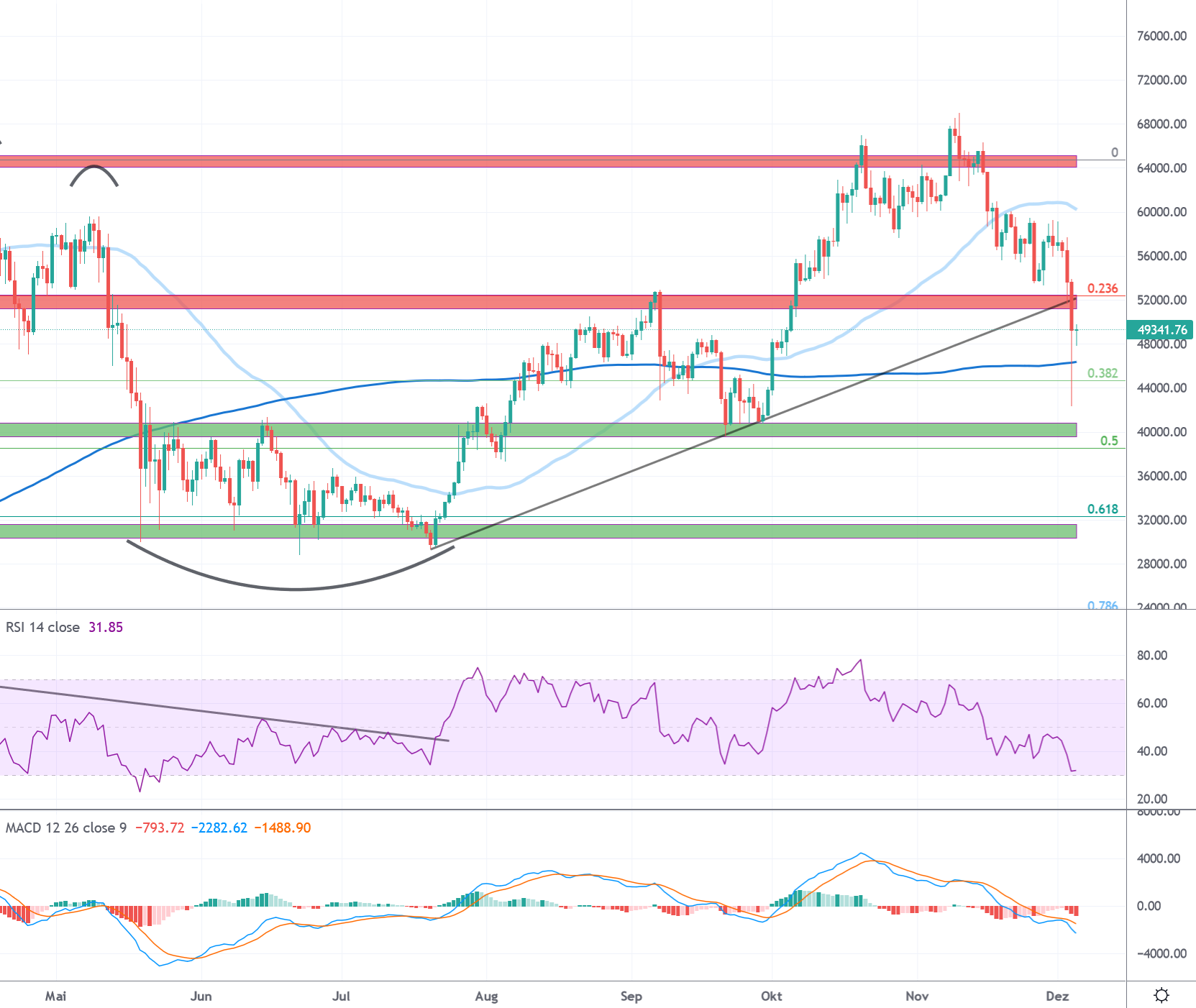 The resistance zone around USD 10,000 was interesting in several respects. On the one hand, the 0.618 Fibonacci point of the entire downward movement, which was initiated at the end of June 2019 just below 14,000 USD, is located here. On the other hand, the zone around USD 10,000 simultaneously acted as a confirmation of the still bearish trend from lower highs since December 2017 (see the macro view on a weekly basis). Bitcoin was able to establish itself above the newly created support in the USD 10,000 area since the end of July 2020 and provided the first confirmation of a trend reversal with the break of the resistance zone around USD 12,200 towards the end of October 2020. In the following weeks, the positive trend accentuated and led Bitcoin through the 14,000 resistance in early November 2020 and close to the then all-time highs around 20,000 USD for the first time in early December, which remained untouched for 158 weeks since the bull market in 2017.

Since the breakout through the important 14,000 resistance at the beginning of November, it has been blowing by blow. The breakout through the old all-time high at USD 20,000 saw a strong accentuation of the uptrend, which saw the bitcoin price mark it’s new all-time high just below USD 65,000 on April 14. However, the rapid upward movement was abruptly stopped in mid-May and led back to the 30,000 USD areas. Subsequently, the price consolidated in the USD 30,000 – 40,000 corridor for three months until breaking out of the upper range of the corridor at the end of July. The subsequent countermovement led to the historical resistance in the area of 52,000 USD. After an initial failure, Bitcoin was able to overcome the resistance zone on October 6 and most recently recorded highs above the old all-time high from mid-April for the first time.

A roundig bottom scenario in the area of the 0.618 Fibonacci point, which is calculated between the start of the rapid uptrend and the old all-time high of mid-April, has manifested itself in a strong upward movement. This eventually led above the all-time high of mid-April. Since the bottoming in the 0.618 Fibonacci area, such a scenario moved more and more into the realm of potential possibilities. This situation was recently strengthened by the retest of the 40,000 zones at the end of September and the subsequent impressive countermovement. At the latest after overcoming the 52,000 resistance level, it was obvious that the market was serious about its mission to reach an all-time high.

The creation of a new all-time high in the USD 69,000 area led to profit-taking, which brought Bitcoin back to the important 50,000 support area in the reporting week. This area has seen quite a few price moves since the beginning of the year and is where the trend line was located, formed by the higher lows since the trend reversal began in late July. The break of this support at the end of the week led to a short-lived visit to the price area above USD 42,000. The consolidation that followed then took place above the 200-day moving average at USD 47,000, which ended in a rally to the USD 49,000 area at the close of the week.

It is obvious that the 50,000 zone, which previously acted as support, now acts as resistance and should accordingly serve as an indicator for further price action. A recapture of this area should be viewed positively, while a bounce suggests a revisit to the 43,000- 45,000 USD area. The bullish structure, consolidated by the 189-day excursion to the break of the old all-time high in the USD 65,000 area, is battered, but the ingredients are still right for a continued price discovery above the new all-time high in the medium term, as long as the USD 42,000 zone is not undercut. 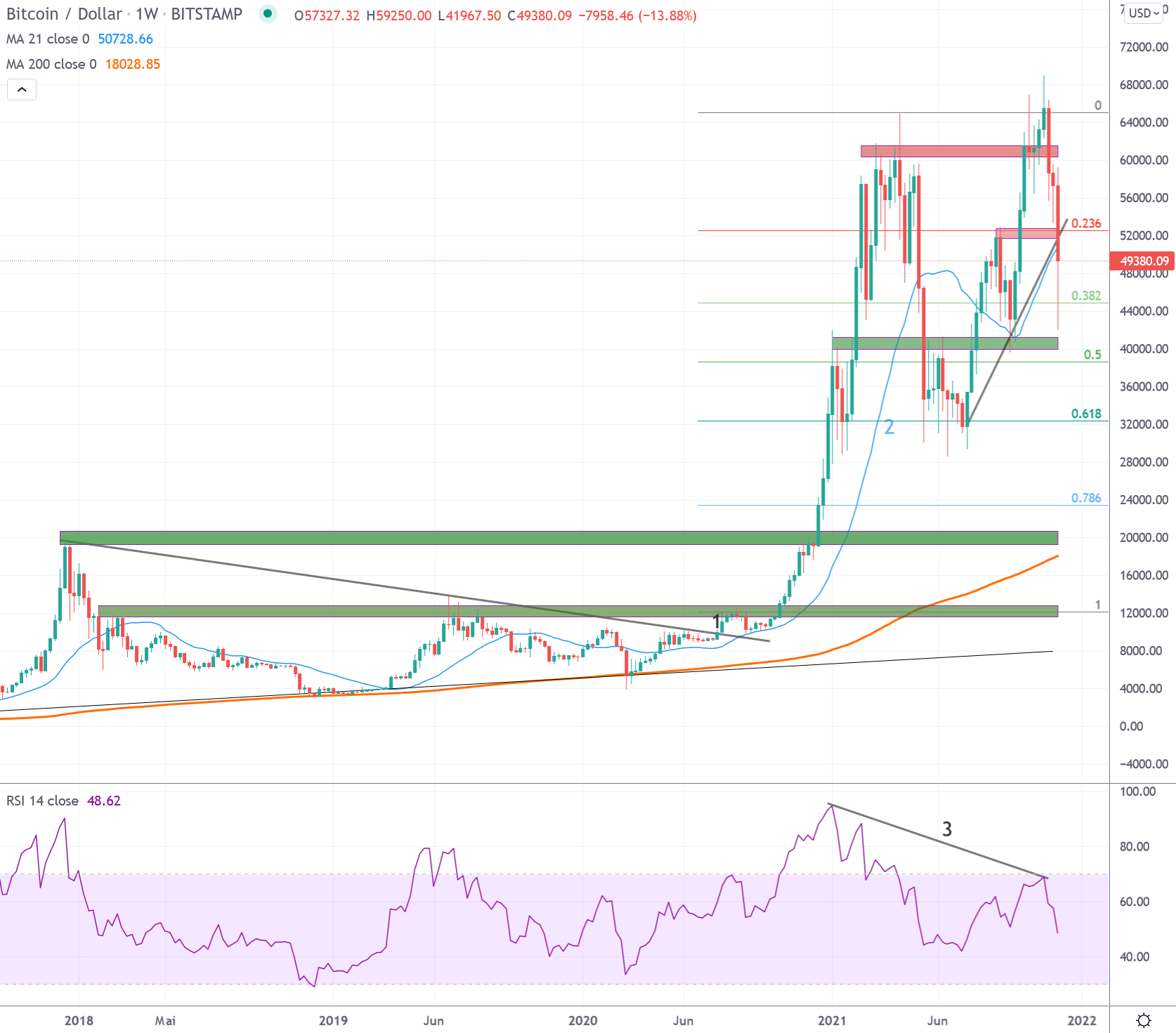 Since this first overcoming of the bearish trend, the signs for a valid trend reversal became stronger. With the push through important resistance zones and a continuous development above the 21-week average (2), the probabilities for a renewed reaching of the all-time high created in 2017/18 increased visibly. This was accomplished in mid-December 2020. This was followed by a strongly accentuated price discovery above this historical mark, which produced a new all-time high of USD 65,000 in mid-April. A consolidation initiated since then ended in a veritable price slide that took Bitcoin back to the USD 30,000 mark in just two weeks. A subsequent breakout from the 10-week consolidation area of 30,000 – 40,000 USD and a subsequent successful retest of the upper range at 40,000 USD brings Bitcoin in an impressive countermovement last above the all-time high created in April.

With the price movements in the past year, a good foundation was created to sustainably climb new spheres beyond the all-time highs reached in 2017. The break of the USD 20,000 mark impressively demonstrated the power of the upward movement that had been establishing itself since October. The rapid price increase was abruptly interrupted in mid-April with a price drop that even brought Bitcoin below the 21-week average (2) that has defined reliable bull or bear market phases in the past.

Bitcoin was able to overcome the subsequent correction phase in the USD 30,000 – 40,000 zone after 3 months. This consolidation also took place in the interesting 0.618 Fibonacci area, which has been calculated since the start of the bull market and the all-time high of April. The breakout from the upper price band of the three-month corridor was another sign that the bulls had not yet given up the sceptre. The onset of the countermovement, which led back to the 52,000 resistance, negated a forming shoulder-head-shoulder formation and once again underscored the claim for a continued bull phase.

The justification for a price discovery beyond the all-time high of mid-April was consolidated by the price movements of the last weeks. A “retest” of the 40,000 zones, which from then on served as support and where the 21-week average sometimes also runs, was successfully completed at the end of September. The bullish momentum was crowned in recent weeks with the break of the 52,000 resistance zone. Price movements above this mark have so far indicated a rapid continuation of price discovery in higher spheres. Exactly this zone was now undercut again in the reporting week. The bullish structure is thus not yet broken, but the market is showing a slower pace than would have been the case with price action above this zone.

The weekly RSI index (3), which showed a negative divergence to the price action despite an all-time high, had indicated that the momentum was on weak legs. It remains to be seen how the price behaves in the current area, as the seminal 21-week moving average (2) is also located here. A consolidation in this area is for the time being no leg break, as long as the development of higher lows since July is not broken. Only a drift into the 40,000 zones would seriously jeopardize this trend and thus the mission continued price discovery beyond the all-time high.