Liquidation cascade in the crypto markets

Bitcoin and Ethereum closed the week in the red after yet another price crash precipitated by cascading long liquidations on crypto derivatives markets. Liquidations can create a waterfall-like effect in spot markets, which are highly integrated and sensitive to derivatives movements. Even though several major exchanges have decreased the leverage offered on their platforms since May’s market turmoil, over 3.1bn USD of long positions were liquidated over 24h (Sept 6-7). A series of negative news stories contributed to the bearish market sentiment with the U.S. Securities and Exchange commission threatening to sue Coinbase over its proposed lending program and mounting concerns surrounding El Salvador’s adoption of Bitcoin and its effect on the country’s U.S. Dollar reserves. 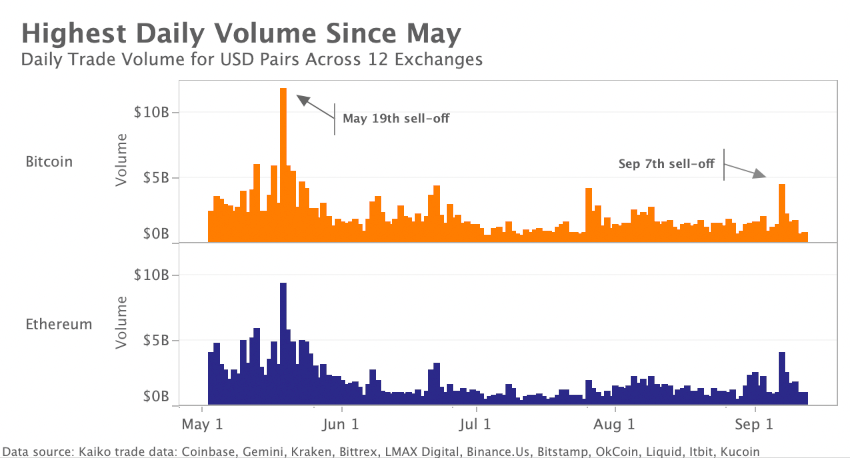 Volumes have been relatively lackluster across exchanges since late spring, hovering between $1-$2 billion a day. Price crashes almost always cause volumes to surge, and that’s exactly what happened last Tuesday during the market-wide sell-off. Bitcoin and Ethereum-USD pairs aggregated across 12 of the largest fiat exchanges saw their highest daily volume since May. The volume caused several exchanges to suffer infrastructure issues with Coinbase reporting “degraded performance” along with Kraken, Gemini, and several others. May 19th, the highest volume day ever recorded, caused infrastructure issues on nearly every major exchange. The problems faced by exchanges on September 7th were far less severe, but still proves that exchange infrastructure has a long way to go before matching the robustness of traditional finance. 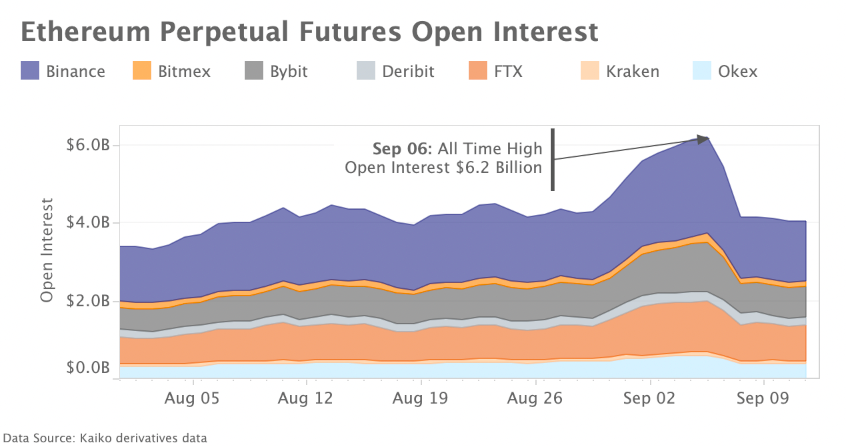 Demand for Ethereum has soared over the past few months on both spot and derivatives markets. On September 6th, open interest aggregated across the leading derivatives exchanges broke new all time highs of 6.2 billion USD. Open interest reflects the outstanding number of derivatives contracts open on an exchange and can be used to gauge sentiment behind price movements. Rising open interest can be interpreted as a bullish sign for an asset, but can also make markets more susceptible to a liquidation cascade due to over-leveraging. That is exactly what happened on September 7th, and we can observe that open interest dropped precipitously throughout the de-leveraging event.

The flash crash was accentuated by the rapid unwinding of derivatives positions which had surged over the past few weeks. Traders generally enter into long derivative positions in expectation of a future price appreciation. However, if they are caught on the wrong side, they are forced to cash-settle their perpetual future contract. Failure to do so, would result in their positions getting force liquidated. 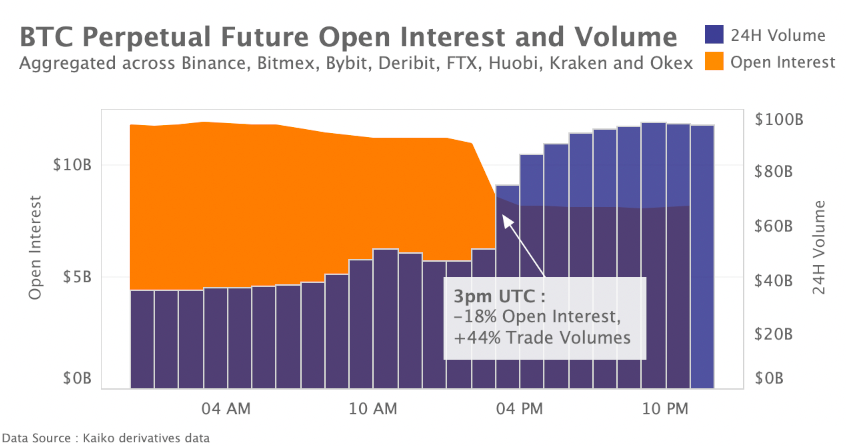 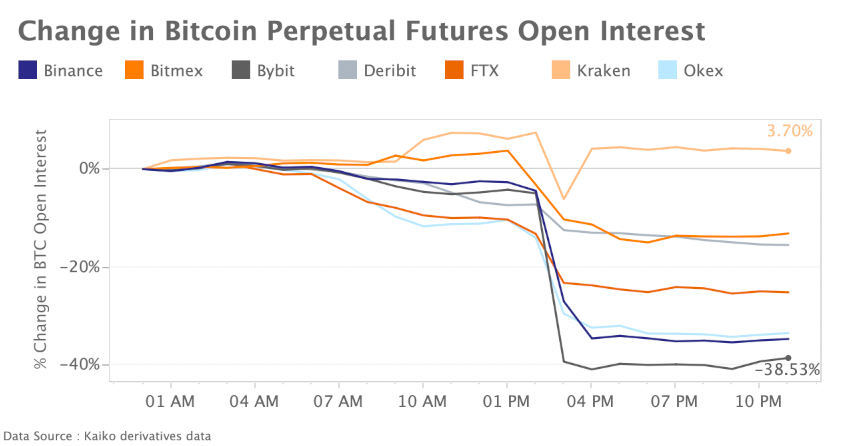 For example, open interest plunged around 40% on Bybit while open interest underwent a marginal increase on Kraken. The difference in the level of expertise of market participants and margin requirements on each exchange could explain this divergence. On Bybit, it is possible to enter into positions with 100x leverage while the maximum leverage is capped at 5x on Kraken. 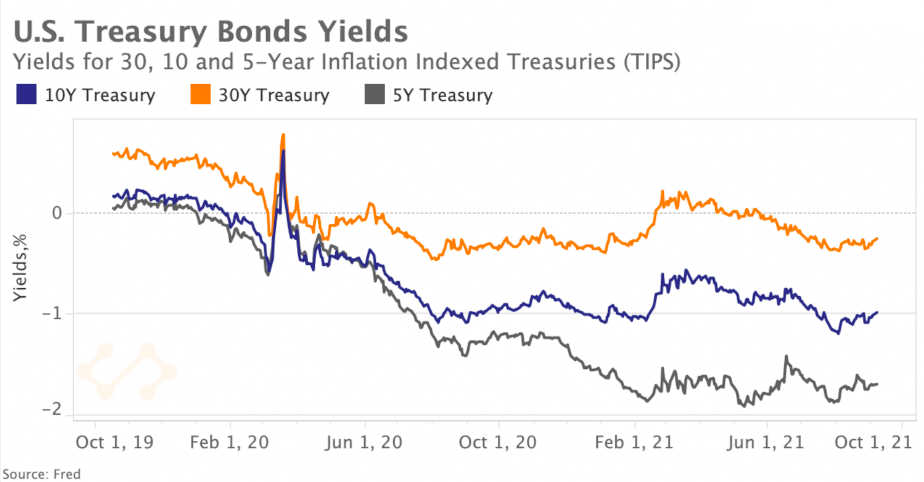 The U.S. Fed’s emergency monetary accommodation has put significant downward pressure on long-term bond returns over the past year. Above, we chart yields on 5-year, 10-year and 30-year inflation indexed U.S. Treasuries (TIPS). Yields on TIPS is equal to treasury bond yields minus the expected inflation rate. We observe that as global inflation increased and growth expectations worsened, real yields turned negative hitting their lowest levels since 2003 this past August. Fixed income assets have played an important role in a diversified portfolio over the past years, offering steady income flows, low volatility, and protection against falling equity valuations. However, as yields are drifting lower, the fixed-income allocation in the classic 60/40 portfolio (60% equities and 40% bonds) is likely to underperform.

In the current low yield environment and due to the rising demand for liquidity in crypto markets, the nascent crypto lending industry is gaining popularity among market participants. Crypto lending allows users to supply cryptocurrencies in exchange for earning an annualized return, even in the absence of price appreciation. A growing number of platforms including centralized exchanges such as Binance and Gemini offer crypto interest-earning programs which are increasingly becoming the target of regulators. These accounts offer sizable returns ranging from 3% to 12%. By comparison, the typical savings account pays a meager 0.7% per year in U.S. dollars.