A sea of red

It’s been a tough week in crypto markets with nearly every top asset down double digits. There is never one simple reason explaining the cause of a market-wide conflagration, but Elon Musk’s tweets were likely the match that struck the fuse at exactly the right moment. For month’s, we have noticed several trends that caused markets to finally reach a tipping point: over-leveraging in derivatives markets, a sharp reduction in order book liquidity in spot markets, exchange infrastructure issues, and the meme-ification of trading. Combined, these market-wide inefficiencies were bound to force a correction with the right trigger. It appears that large market participants bought the dip last Wednesday, but the buying pressure wasn’t enough to prevent further losses over the weekend. 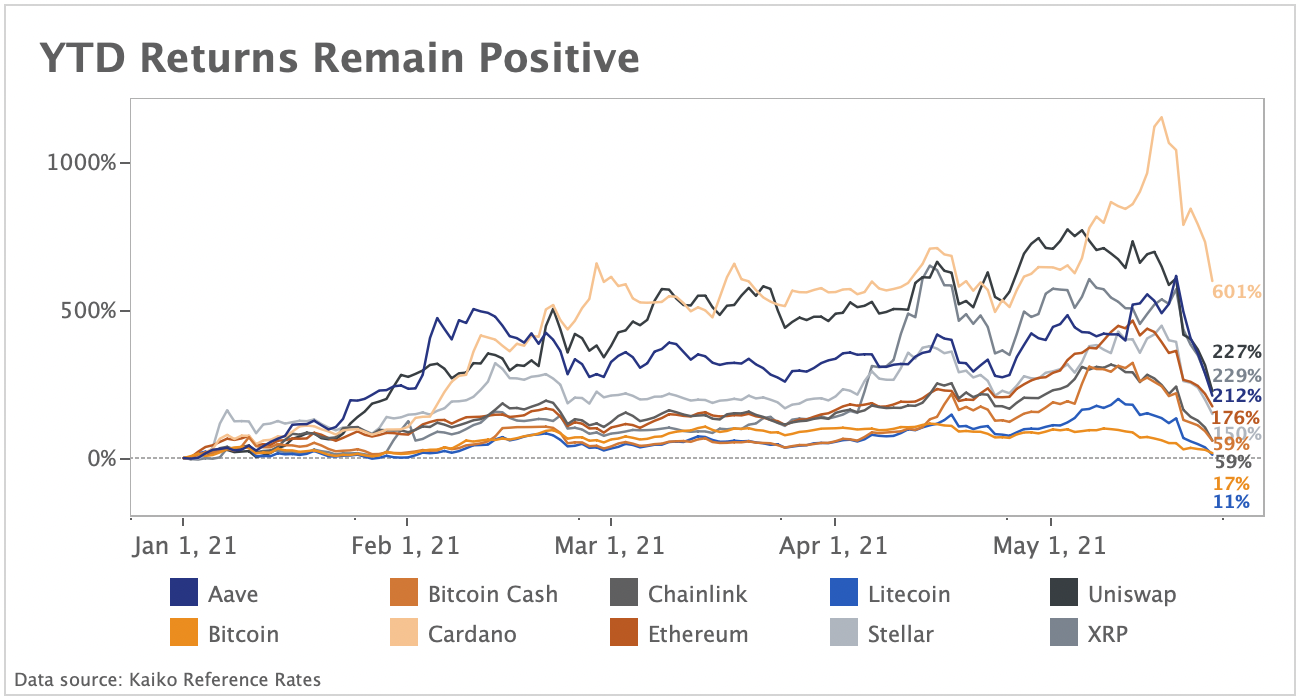 The recent sell-off may have erased month’s of gains, but crypto markets are still well in the green for the year. Most of the top altcoin assets are up triple digits YTD, with Cardano up 600% and many DeFi tokens in the +200% range. Over the past few months, Bitcoin and Ethereum have been comparatively calm compared with the altcoin frenzy, with a mere +17% and +176% returns, respectively. Meanwhile, the S&P 500 market index is up only 10% YTD.

Tether continues to trade at a premium 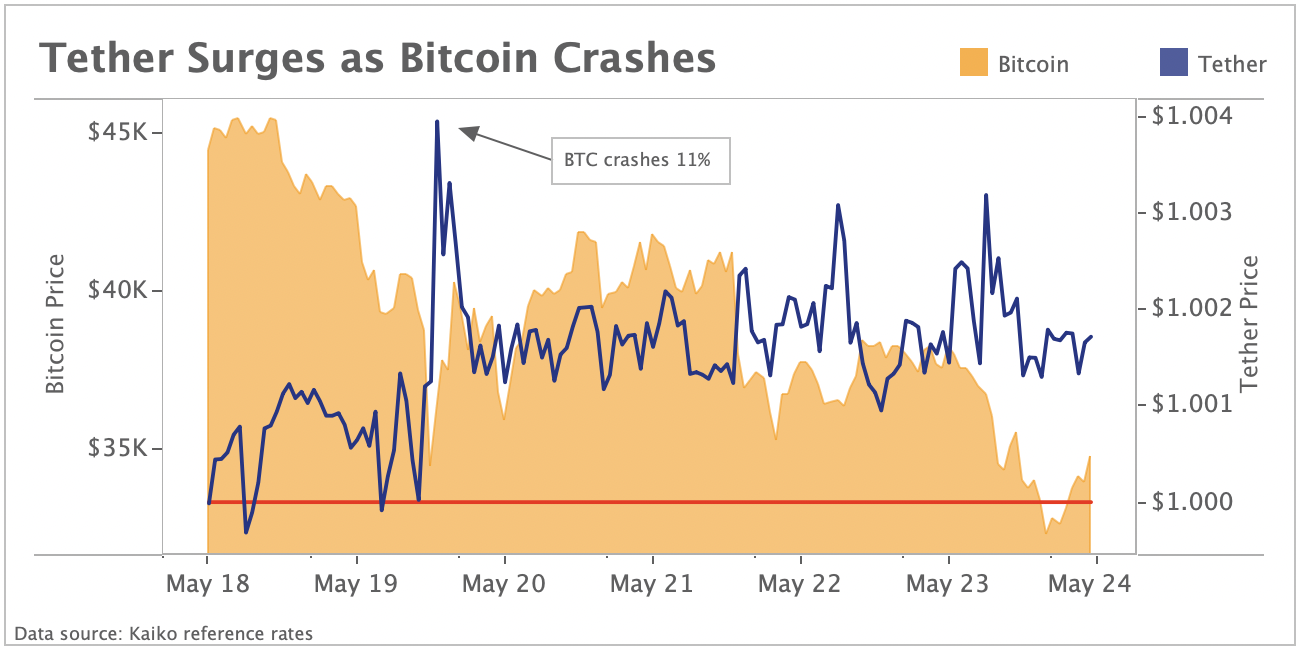 In previous newsletters, we identified Tether’s tendency to trade at a premium during Bitcoin sell-offs. Last week’s market-wide correction further demonstrated this phenomenon. When markets crash, traders will race to sell their holdings in exchange for Tether, the largest stablecoin which is designed to trade at exactly 1-to-1 with the U.S. Dollar. However, an increase in demand for Tether generates an imbalance in buying pressure which can cause the stablecoin to lose peg. For the past few months, Tether has for the most part traded at a premium to the dollar, but during a crash we can observe temporary spikes in the exchange rate. This suggests that Tether is considered a safe-haven amidst extreme volatility. 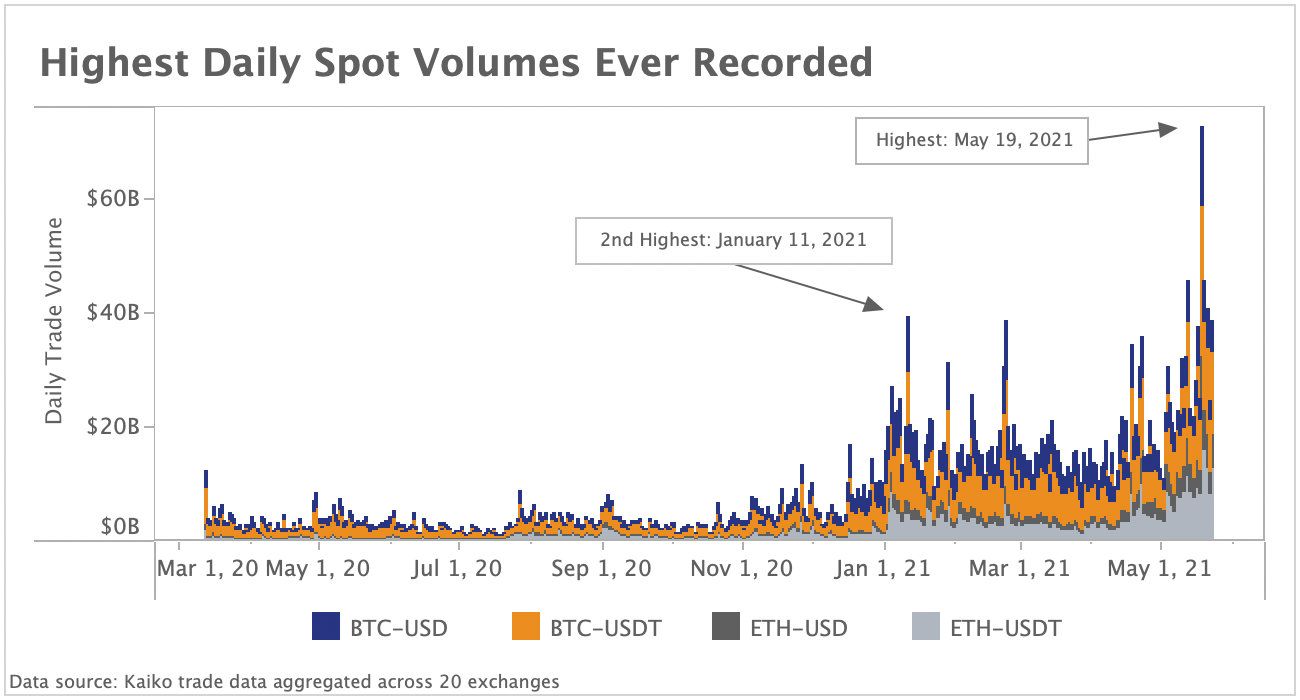 Across the top Bitcoin and Ethereum spot markets, more than $70 billion in trades were executed throughout May 19th’s sell-off, nearly double the next highest volume day (recorded on January 11th). Previous sell-offs have been linked to forced liquidations in derivatives markets, but last Wednesday’s liquidations did not surpass April’s record which suggests that the selling pressure originated in spot markets. However, this does not mean that the many billions in liquidations did not contribute to Bitcoin’s spiralling price.

Throughout the day, nearly every large exchange suffered some form of downtime or delays. The best metric to look at when analyzing exchange infrastructure is trade count, which refers to the number of trades executed for a trading pair. Trade count gives an idea about the raw number of transactions that an exchange’s matching engine is able to process before suffering delays, lagging interfaces, or downtime. We charted the number of trades per day for the top BTC-USD pairs and can observe that May 19th’s trade count was magnitudes higher on Coinbase than on any other exchange. 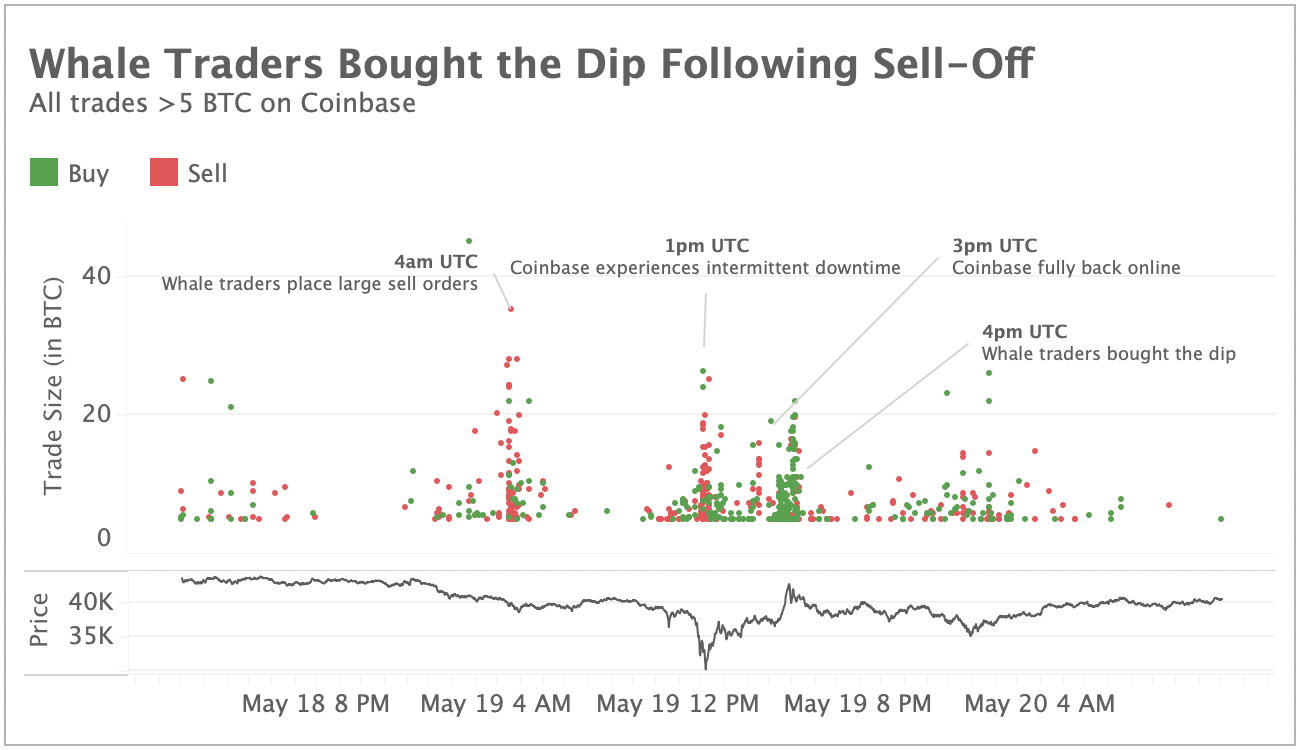 Raw transaction data can reveal a lot more about micro market movements than aggregated volume data. Above, we chart individual trades made by large market participants on May 19th before and after Bitcoin’s price crash. We define a large trade as any market order greater than 5 BTC (around $150’000 at the time of the sell-off). Large trades give an idea of the sentiment and behavior of institutional traders during pivotal market events. Typically, institutional traders will break apart large market orders into smaller orders to prevent price slippage. However, Coinbase’s order books are often liquid enough to support large market orders which is why we specifically analyze the BTC-USD pair.

We can observe that around 4am UTC, large traders began placing market sell orders as Bitcoin dipped below $40k, many valued at higher than $500k. Nothing much happened until around 1pm UTC, when the price began to plummet and the quantity of large sell orders surged. Around this time, Coinbase began experiencing intermittent downtime. In the aftermath of the sell-off, we can observe that big traders began buying the dip in large numbers. This caused Bitcoin’s price to surge above $40k, only to plummet once again as buying pressure dried up.

What is interesting to note is that the initial 4am sell orders were executed around midnight EST, an unusual time for large market movements. This suggests that these orders were not U.S.-based or they were algorithmically executed.