You are at:Home»Investing»UBS warns Clients of Potential Total Loss on Bitcoin investments

“Due to many Client inquiries,” strategists at Swiss bank UBS recently expressed their assessment of Bitcoin and cryptocurrencies in general. The bank warns that a total loss is possible, and has a hard time with an assessment of the “fair value”.

Last week, the major Swiss bank published a report called “Should I buy Bitcoin?” The UBS Global Wealth Management department does not rule out higher prices in the short term, but the investment experts remain sceptical about the cryptocurrency. They cite regulatory uncertainties as well as the possibility that a “more popular” cryptocurrency could replace Bitcoin in the future. The replacement argumentation is aimed at other digital currencies in the payment sector. Direct comparisons are drawn with private stablecoins such as Libra, as well as with upcoming Central Bank Digital Currencies (CBDCs). (Editor’s note: A controversial comparison due to the contrasting characteristics bitcoin has to centrally issued payment tokens with no upper limit).

The weightiest point UBS refers to is the regulatory environment. In this regard, the bank’s strategists believe it is possible that certain financial products for cryptocurrencies will be banned or restricted in the future. This could have a negative impact on the price. The derivatives ban for retail investors in the UK is mentioned. Other regulators could follow suit, as crypto market capitalization has risen sharply, posing a “threat to financial stability.”

A “better” cryptocurrency could replace Bitcoin

The authors provide another argument for a cautious Bitcoin assessment in terms of the diversity of cryptocurrencies that already exist. According to them there is nothing to prevent another cryptocurrency from replacing Bitcoin as the number one. Here, the big bank draws comparisons to fallen internet stars of the dotcom boom, such as Netscape and Myspace.

[…] There is nothing to stop future cryptocurrencies from overtaking Bitcoin and other current cryptocurrencies in popularity – whether launched by a private initiative or public authorities. The barriers to entry in this market are low, as evidenced by the more than 4,000 Cryptocurrencies currently listed on CoinMarketCap. […] Netscape and Myspace are examples of network applications that enjoyed great popularity but eventually disappeared.

Bitcoin in a portfolio context

UBS sees no obvious arguments for integrating Bitcoin into a portfolio in its report. In part, it refers to the broader study called the Rise of Bitcoin. In it, the largest Cryptocurrency is said to have a certain diversification effect, but the risk-adjusted returns are mainly attractive in phases with high price increases. UBS chose the period January 2018 – December 2020 as the basis for its data collection. 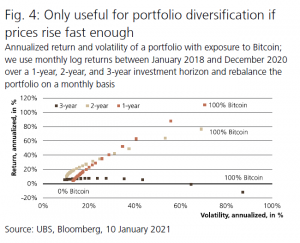 The question of whether Bitcoin makes sense in a portfolio context is left open, citing the lack of cash flow characteristics. Only in this way could the authors evaluate the question in terms of intrinsic value (discounted cash flow method DCF).  The question of whether Bitcoin is in a “bubble” is left open, using the same explanation. However, history shows that when buyers buy an asset only because they expect to be able to sell it again at a higher price, it eventually leads to dramatic corrections, according to the study.

No matter what generation you belong to, it’s worth remembering that since the Tulip Mania in the 17th century, price bubbles have been driven mainly by speculative intent. – UBS study “The rise of Bitcoin”

The authors of the study see interesting approaches in terms of digital currencies from central banks (CBDCs), which are identified primarily in the simplification of payment processing. Nevertheless, banks would continue to play an important role in the financial system, as it is not to be assumed that central banks will be involved in lending in the future.

Economically, the authors of the study see weighty differences between CBDCs and cryptocurrencies. Thanks to central banks’ control over the respective money supply, CBDCs have considerable advantages over cryptocurrencies as a stable store of value, according to the Wealth Manager.