You are at:Home»Investing»Fidelity sees potential in Bitcoin as an emerging value investment

Fidelity Digital Assets, the subsidiary of one of the world’s largest asset managers, has published the first report of its Bitcoin investment thesis. The report describes Bitcoin as an emerging value investment and compares it to asset classes such as gold.

Fidelity Investments is a US financial services company that currently manages over $8 trillion in assets. Two years ago they established a subsidiary, Fidelity Digital Assets, which provides custody and other digital asset management services. Last week they published the first part of their “Bitcoin Investment Thesis“.

Why Bitcoin is bought and stored can have completely different reasons. To this day, there is still a debate whether Bitcoin (BTC) is a medium of exchange, an alternative asset, an investment or something completely different. But actually it is not necessary to limit oneself to one of them:

“The truth is that as the ecosystem matures, Bitcoin can perform many functions simultaneously – either fundamentally or through incremental steps. One of the nice things about Bitcoin is that its success doesn’t depend on serving a single purpose.” – Ria Bhutoria, Director of Research

According to Fidelity, Bitcoin has the characteristics of a value investment, but is not currently widely recognised as such. They compare it to an investment in Facebook when it had 50 million users, with the potential to grow to today’s 2 billion users. Bitcoin still has a relatively low demand compared to global assets like gold. If private and institutional investors in the future view Bitcoin as a value investment, the upside potential could be very high.

One of the main arguments against Bitcoin as a value investment is volatility. Many Bitcoin enthusiasts respond to this with the following idea: It is unlikely that the development of a new asset (Bitcoin) that is hardly noticed and used, into a global value asset (e.g. gold), will be linear. Furthermore, many people have only come across Bitcoin because of its volatility. It was only when they learned more about it that long-term plans developed.

Upward volatility in particular also attracts investment and innovation. Cycles often start with an increase in the price of digital assets, which leads to more exchange and attention in (social) media. This in turn attracts new talent and projects. On the other hand, the volatility of Bitcoin will probably always be higher than that of traditional investments, as this is a side effect of the completely inelastic supply and largely unregulated market. However, as more Bitcoin is needed over time and investors become interested, this volatility should steadily decrease.

What makes Bitcoin attractive as an investment?

The goal of a value investment should be to maintain its purchasing power over a longer period of time. The purchasing power of emerging value investments increases steadily until it finally stabilizes. According to Fidelity, the most important characteristics of such investments are scarcity, portability, durability and divisibility. The most important of these is scarcity, which prevents long-term loss of value because there is a clearly limited quantity, it is not easily produced and counterfeiting is impossible.
One of Bitcoin’s new innovations was digital scarcity. It is one of the most important characteristics when it comes to understanding and appreciating Bitcoin. Even before Bitcoin, there had been many attempts to create digital scarcity, but only Satoshi Nakamoto was able to really make it happen. By cleverly combining already known concepts, he was able to tackle previously unsolved problems (e.g. double spending).

Bitcoin has a decentralized network of nodes that store all transactions and independently verify them so that all network rules are followed. Thus there is no central point of failure. Nodes that verify transactions are separate from the miners that use their computing power to process transactions. Any computer can become part of the network and verify Bitcoin transactions, currently there are over 10’000 nodes.

This system makes it practically impossible to counterfeit money, because transactions that do not comply with the rules of the network are rejected by the nodes. Thus, the central characteristics of Bitcoin, such as the limited offer of 21 million, cannot be changed. It therefore has no central authority to control monetary policy. This would require 51% of all users to ally or influence each other, which is very unlikely, if not almost impossible.

Moreover, thanks to the algorithm (proof of work), all transactions cannot be reversed or changed. So transactions are unchangeable and become even more secure as long as the blockchain grows.

In response to the economic consequences of the COVID-19 shutdowns, central banks and governments have resorted to enormous economic stimulus packages. The economy was stimulated with record low interest rates and new dimensions of quantitative easing (QE) to neutralize deflationary pressures. It is not yet clear what the actual impact of these measures will be, but if it leads to (hidden) inflation, many investors may be interested in an “unprintable” investment. Originally, this was done by buying real estate or precious metals, but perhaps it is now Bitcoin’s time to shine.

But even slow, steady inflation reduces the purchasing power of most fiat currencies over a long period of time. So if people want to maintain or increase their wealth, they need to invest in assets. So if Bitcoin becomes more and more recognised as a value investment, demand could also increase, according to Fidelity.

The purchasing power of the US dollar 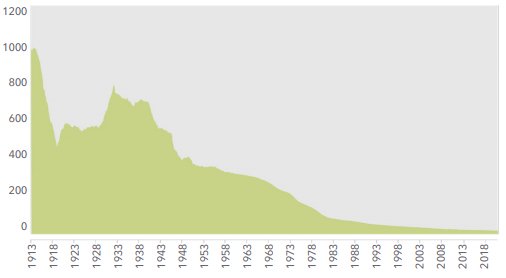 Recently, the younger generations (X and especially Y), who were severely affected by the financial crisis in 2008, have also been rather sceptical about the current financial system. Since they are more familiar with modern technology, they are more interested in digital assets than the older generations. So while the millennials are acquiring more capital, Bitcoin can also benefit from this. In its study, Fidelity Digital Assets sees the above facts as sound arguments for investing in Bitcoin.