You are at:Home»Focus»Legal&Compliance»US authorities file charges against founders of crypto exchange BitMEX

One of the world’s largest exchanges for crypto derivatives is being accused of circumventing anti-money laundering (AML) laws. The platform has daily trading volumes of up to USD 4 billion and offers, among other things, 100x leveraged futures contracts.

US prosecutors filed criminal charges against four founders and executives of BitMEX on Thursday. Bitmex is one of the most influential derivatives exchanges for crypto currencies. The exchange is operated by HDR Global Trading Limited, a company registered in the Seychelles with offices worldwide.

Months of investigation by the Commodity Futures Trading Commission (CFTC)

Already in July, the news portal Bloomberg reported on open investigations of the regulatory authority CFTC against the crypto exchange Bitmex. The CFTC is in charge of the supervision and regulation of markets for futures and other derivatives based on them. Virtual currencies such as Bitcoin are regulated as commodities.

The investigations focused on whether BitMEX had breached the regulations by allowing Americans to trade on the platform without registering with the agency. As Reuters reports, the commission now filed a separate civil lawsuit to stop BitMEX’s U.S. derivatives business.

US prosecutors filed criminal charges on Thursday, accusing the four founders and managers of BitMEX of circumventing regulations to prevent money laundering. Arthur Hayes, Benjamin Delo, Samuel Reed, and Gregory Dwyer were charged in New York with accusations that the derivatives exchange was delivering services to American customers while at the same time deliberately disregarding U.S. banking laws. 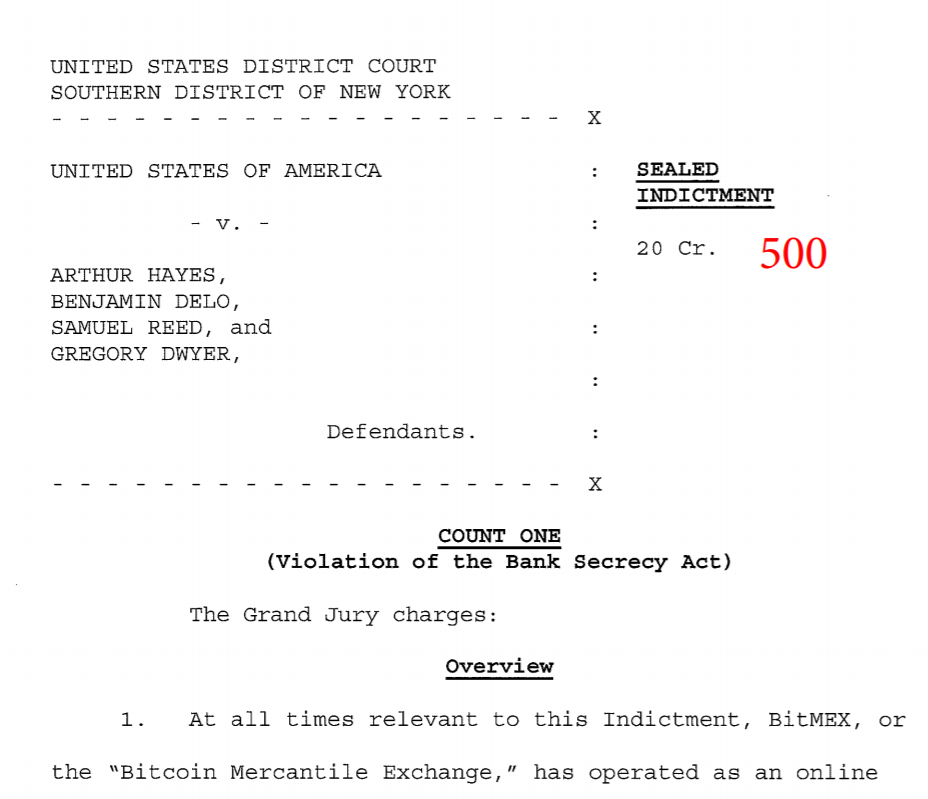 Extract from the indictment / Source: www.justice.gov

The defendants have disregarded their obligation to implement an anti-money laundering program with a “know your customer” requirement, according to the indictment filed in Manhattan Federal Court. This was intentional, so the accusation, to conceal the fact that BitMEX serves US customers without being registered as a derivatives exchange. The founders apparently also deliberately chose the Seychelles as their domicile, since the regulations there are less strict. According to the prosecutors, BitMEX thus became a money laundering vehicle that has been used by hackers in the past.

In response to the accusations, BitMEX published a statement on its blog:

“We strongly disagree with the U.S. government’s heavy-handed decision to bring these charges, and intend to defend the allegations vigorously. From our early days as a start-up, we have always sought to comply with applicable U.S. laws, as those laws were understood at the time and based on available guidance.” – Spokesman for the parent company HDR Global Trading Limited

In the meantime, the BitMEX platform should work as usual. Payouts also function normally and all customer funds be safe, according to them.