You are at:Home»Hot Topics»News»Citibank sees Bitcoin at a “Tipping Point”

Citibank, one of the world’s largest financial services providers, recently published a detailed report on Bitcoin. They see great potential in the cryptocurrency and speak of a “tipping point” for digital assets. Is Bitcoin entering the mainstream?

Citibank’s report is based on a series of interviews with CEOs and professionals from the leading custodians, exchanges, infrastructure and asset management firms. It includes Bitcoin’s potential in addition to its origin story.

Bitcoin has given rise to, influenced and inspired new business models. At this point, no one can say how far the potential transformation will continue. Bitcoin’s journey has clearly reached a new phase, according to Citi. During this journey, the perception of what makes the cryptocurrency unique will continue to transform.

Bitcoin at a “tipping point”

The Citi GPS (Global Perspectives & Solutions) report speaks of a crossroad. Either digital asset adoption takes place, or a speculative implosion follows. Bitcoin is at a tipping point and could become the “currency of choice” for global commerce, according to Citi.

Bitcoin’s dynamic narrative has been instrumental in the idea now gaining traction in the mainstream and among institutional investors. Measures taken in the pandemic year 2020 reinforced concerns of currency devaluation. The report suggests that companies are using Bitcoin to hedge against inflation. As the global economy recovers, there could be a shift into traditional markets, stifling growth.

Many different things at once

For some, Bitcoin is a payment system that will disruptively change the entire payments landscape. For others, it is a new currency that can store value in a unique way, creating a new model of money issuance that is beyond the control of any single nation. 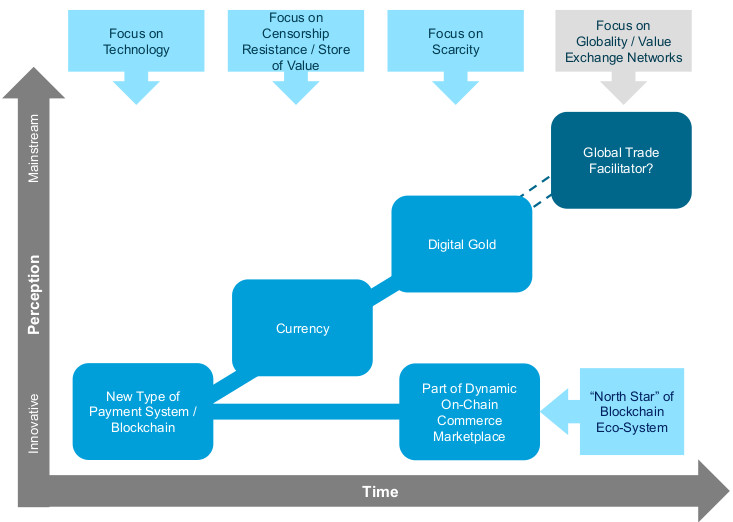 Many people focus on Bitcoin’s limited supply, comparing it to digital gold or considering its price as an asset class. Some see the potential for Bitcoin to become a global trading currency when considering the future of crypto assets. Such a currency could have the chance to reduce the friction and complexity of cross-border trade, according to Citi.