Which person or group of people hide behind this pseudonym is still unknown today. Since the appearance of the name in 2008, several people have been mistaken for Nakamoto or have claimed his identity. However, no one has been able to prove this so far. 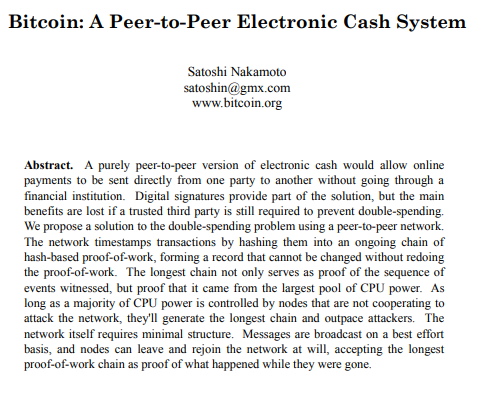 Extract from the white paper

No personal data is known about Satoshi Nakamoto, he only appeared in virtual space under his pseudonym. He then created the Bitcointalk forum and published the first message under the pseudonym satoshi. He also created a website with the domain name bitcoin.org and continued working on the Bitcoin software. On January 3, 2009, Satoshi mined the first Bitcoin block, the so-called “Genesis block”. The first Bitcoin block contains a headline from the British magazine “Times” of the same day: “Chancellor on brink of second bailout for banks“.

On 12 January 2009, the first transfer via the Bitcoin network was completed. It was the first transaction with Bitcoin between two computers. Hal Finney, a developer and cryptographic activist, received 10 Bitcoins from Satoshi Nakamoto. Some observers consider it possible that Hal himself was Satoshi Nakomoto. Hal died in 2014 of a disease.

During 2010, Satoshi Nakamoto worked with other developers to modify the Bitcoin protocol. He was involved in the Bitcoin community and corresponded frequently with them. He then handed over the keys and codes to Gavin Andresen and transferred domains to members of the community. By the end of 2010, he had stopped working on the project.

On his P2P Foundation profile, Nakamoto is recorded as a man of Japanese descent born in 1975. However, due to the perfect English used in notes and messages around the Bitcoin software and the time of day of Satoshi’s activities, some people claim this can’t be true.