You are at:Home»Focus»Background»Uniswap “Stimulus Check” for DeFi users

Uniswap, currently the largest decentralized exchange, launched its “UNI” token last week. They celebrated this by granting 400 tokens to each user – nearly 3’000 US dollars for a short period of time. We explain the latest events concerning Uniswap and its competitor, SushiSwap.

Decentralized Exchanges (DEX), together with the DeFi space, have recently experienced an incredible hype. Uniswap was able to establish itself as the largest platform. Within 90 days, the total value locked (TVL) has exploded from almost 50 million USD to 1.5 billion USD. There have been countless copies of the platform lately, which led to huge controversy. Last week, every Uniswap user received thousands of US dollars worth of governance tokens, giving the community a say in the project’s future.

Uniswap is an entirely decentralized exchange based on Ethereum. Unlike centralized exchanges (CEX), Uniswap does not have an order book that determines a token price. Instead, so-called liquidity pools can be created for all ERC-20 tokens, for which any person can provide liquidity. If a user buys a specific token or wants to exchange (swap) it with another token such as Ether, the respective liquidity pool is accessed. 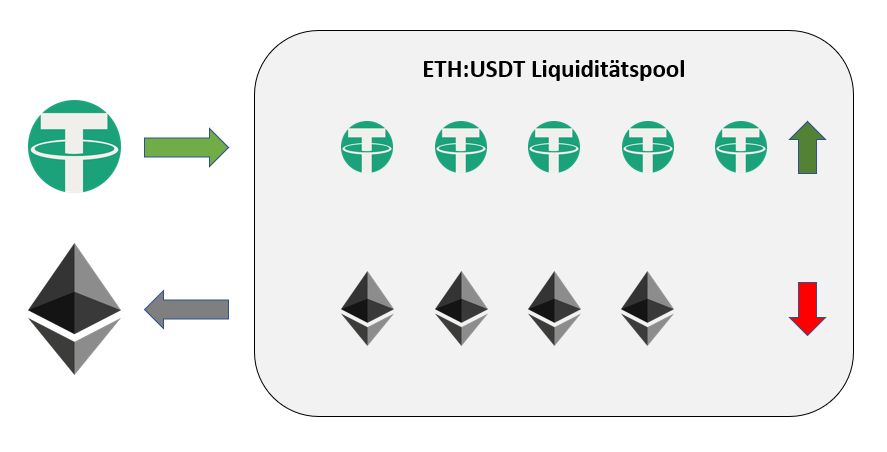 Therefore, the protocol automatically, without any third parties, adjusts the price to the token reserves in the liquidity pools. As a reward/incentive, liquidity providers (LP) receive the full fees. Uniswap itself earns nothing from this. Although all processes are entirely decentralized, users could not influence in which direction the protocol is headed until last week. This is precisely where SushiSwap comes into play.

The inventor of SushiSwap, known under the pseudonym “Chef Nomi,” has copied the open-source code of Uniswap (fork) and added a crucial feature, the SUSHI token. Users who hold the token on the protocol get a say in the development (governance rights), and part of the fees are paid out (in SUSHI). So the platform should be laid into the hands of the community. An idea that inspired many DeFi fans; within a few days after the launch, the Total Value Locked (TVL) in SushiSwap had already reached over one billion USD.

But the hype had another reason. Chef Nomi started a small (obviously successful) marketing campaign: For a limited time, all SUSHI rewards were increased tenfold (10x), and all liquidity providers (LP) on Uniswap received additional SUSHI if they handed over their liquidity pool share to SushiSwap – so-called “zombie mining.” So, driven by greed, everyone started to “farm” SUSHI like crazy and participated in the SUSHI liquidity pools on Uniswap. This, by the way, was also the reason for the exponential increase in Uniswap TVL in Figure 2.

This marketing campaign’s ultimate goal was to migrate all SushiSwap users’ liquidity pools from the rival Uniswap to his own protocol. But as the project received more and more attention, Chef Nomi suddenly decided to sell all his SUSHI tokens (from the developer pool) for a total of $14 million on the market. The whole thing reminded of an exit scam, and the SUSHI price dropped by 75%. The anonymous developer affirmed that he did everything for the sushi community and will continue to work on the project. The community strongly doubted this.

People asked if I exited scam. I did not. I am still here. I will continue to participate in the discussion. I will help with the technical part. I will help ensure we have a successful migration. @SatoshiLite did that and Litecoin had no problem surviving.

After a lot of back and forth, Chef Nomi finally decided to hand over the control to FTX CEO and Sushi investor Sam Bankman-Fried. He delayed the migration and transferred the admin keys to a multi-signature wallet, to which a total of nine people have access. The SUSHI holders voted on the candidates. From now on, changes to the protocol could only be made if 6/9 administrators agreed to the transaction. Chef Nomi doesn’t have access anymore.

Under the new team, the migration of the liquidity pools from competitor Uniswap to SushiSwap was completed within a few days. Within one day, 1.2 billion USD in liquidity flowed went from Uniswap to the “newcomer,” SushiSwap. On the same day, Chef Nomi wrote an enormous chain of tweets in which he apologized to everyone involved for his actions. He also sent the $14 million in ether back to the developer pool of SushiSwap:

I have returned all the $14M worth of ETH back to the treasury. And I will let the community decide how much I deserve as the original creator of SushiSwap. In any currency (ETH/SUSHI/etc). With any lockup schedule you wish.https://t.co/QwFj5SeeuQ

After the successful migration, the period in which the SUSHI rewards were increased tenfold was coming to an end. The rewards per block for liquidity providers (LP) were thus reduced from 1’000 SUSHI to 100. Apparently the SUSHI token’s governance function was not so crucial for most people, after all. Shortly after that, liquidity fell by almost half on SushiSwap and it was overtaken again by Uniswap. 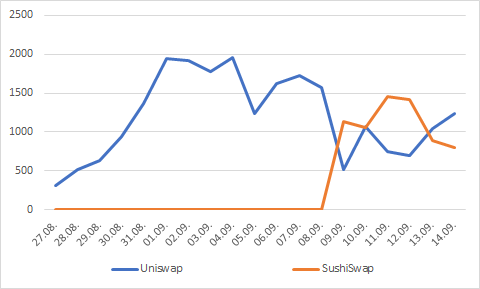 Uniswap launches its own token

But the story doesn’t end there, because less than a week later, Uniswap announced its own governance token: UNI. Every user who interacted with the protocol at least once before September 1 was sent an airdrop of 400 UNI. At release, this was about 1’200 USD, and due to the following price increase, it briefly exceeded 3’000 USD. Liquidity providers (LP) received even more. At the moment, more than 100 million UNI tokens have already been distributed – a tenth of the total supply.
Now that the last advantage of SushiSwap over Uniswap was gone, a massive amount of liquidity came back to Uniswap. The TVL is currently (21.09.) at a new high of almost 2 billion USD. SushiSwap, on the other hand, is continually losing liquidity and volume.

Whether this token launch was planned before the sushi roller coaster or as a reaction to it is unclear. In any case, the community was very happy about it; the announcement on Twitter had almost 6’000 likes. Nearly all well-known people in the crypto scene, such as the CEO of Binance “CZ,” also commented positively about it.