You are at:Home»Focus»Background»DeFi: What happens when the music stops?

DeFi has significantly improved token design and distribution compared to the ICO era. Still, the current yield farming trend does not seem sustainable. It’s likely that only bigger protocols, which have added value and have defensibility, will survive in the long term.

While not yet complete, this year can already be classified as unexpected and surprising! It is unexpected because no one imagined that a novel virus would paralyse the global economy and lead to the greatest economic contraction on record. In the United States, GDP contracted by about one third (at an annualised rate) in Q2—more than in the darkest hours of the Global Financial Crisis. The US is just one example from a long list of economies that halted abruptly.

This year is surprising because financial markets, particularly equity markets, have completely decoupled from the real economy. For example, it took only 5 months for the S&P 500 to recover entirely and to reach a new all-time high, while the real US economy remains oppressed and characterised by widespread unemployment and underemployment.

While the decoupling of financial markets and the economy is a topic in and of itself, this is not the one we discuss in this article. A remarkable development in the recent equity rally is the strength of the technology sector. For years, this sector has outperformed others, but this time it outstrips other sectors by a wide margin. Currently, the technology sector represents more than a quarter of the S&P 500 market capitalisation and is thus the largest sector of the index.

Thanks to the development of new services, Bitcoin, the most famous blockchain protocol and cryptocurrency, has gradually lost its dominance as measured by its current market capitalisation. Since the beginning of 2020, the bitcoin market share has declined by 9 percentage points to 57% today. This decline results from the ascendency of existing tokens and the arrival of new ones.

Among the existing tokens, ether, the native currency of the Ethereum platform, on which most smart contracts are issued, has attracted international attention. The success of Decentralised Finance (DeFi) applications built on Ethereum has massively increased demand for this platform. To illustrate, the average block size doubled this year from 20MB to about 40MB, and fees have multiplied by a factor of 10 (see Figure 1). Increasing demand has also substantially impacted ether’s price, and in June, it passed over $400 for the first time since the bull run of 2017-18. 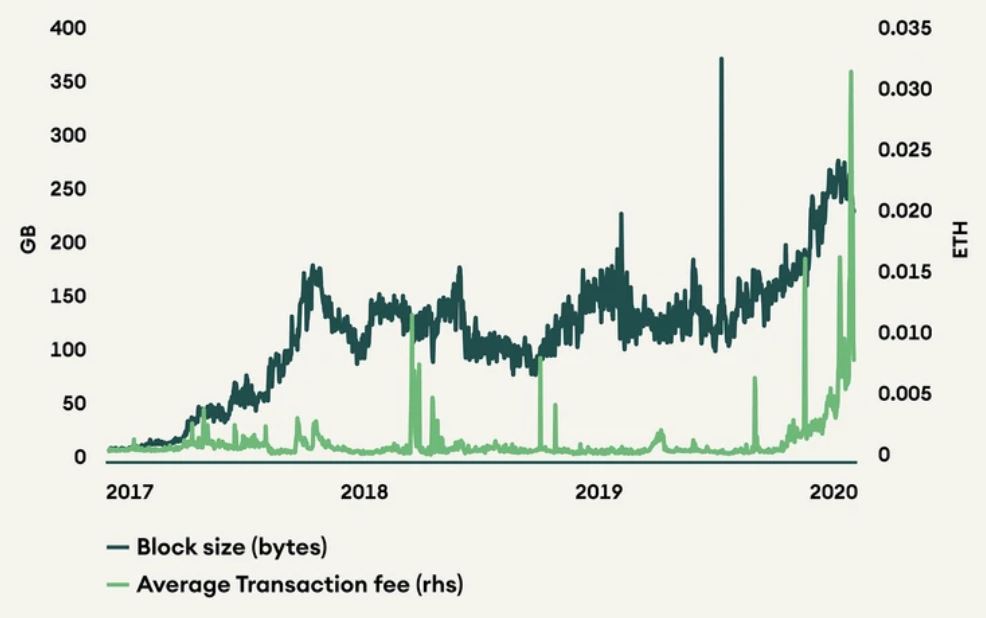 Concerning DeFi, we have observed two different adoption waves. The first wave consists of the explosion in stablecoin demand that occurred when the COVID crisis hit the financial market. The crypto dollar that benefited the most from the portfolio reallocation is the USD stablecoin Tether (USDT). USDT market capitalisation (i.e. the number of crypto dollars in circulation) increased from about $4.8bn pre-crisis to $13.7bn today (see Figure 2). Notice that USDT is issued on three platforms, but it is the Ethereum platform that has been used most frequently. 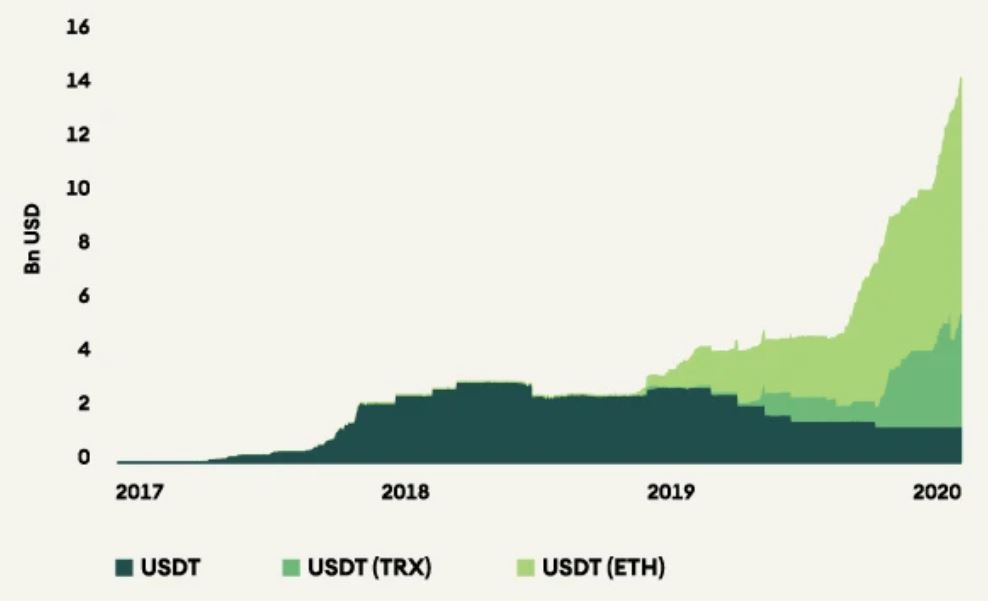 The second wave of DeFi, more powerful than the previous, relates to yield farming, a broad group of activities that consists of borrowing and lending cryptocurrencies via dedicated Decentralised Finance applications. Therefore, we will compare ICOs and DeFi while keeping yield farming in mind.

Since DeFi is the catalyst for the general increase in cryptocurrency prices, it is also reminiscent of the ICO mania of 2017-18. In this section, we evaluate the similarities and differences between ICOs and DeFi. 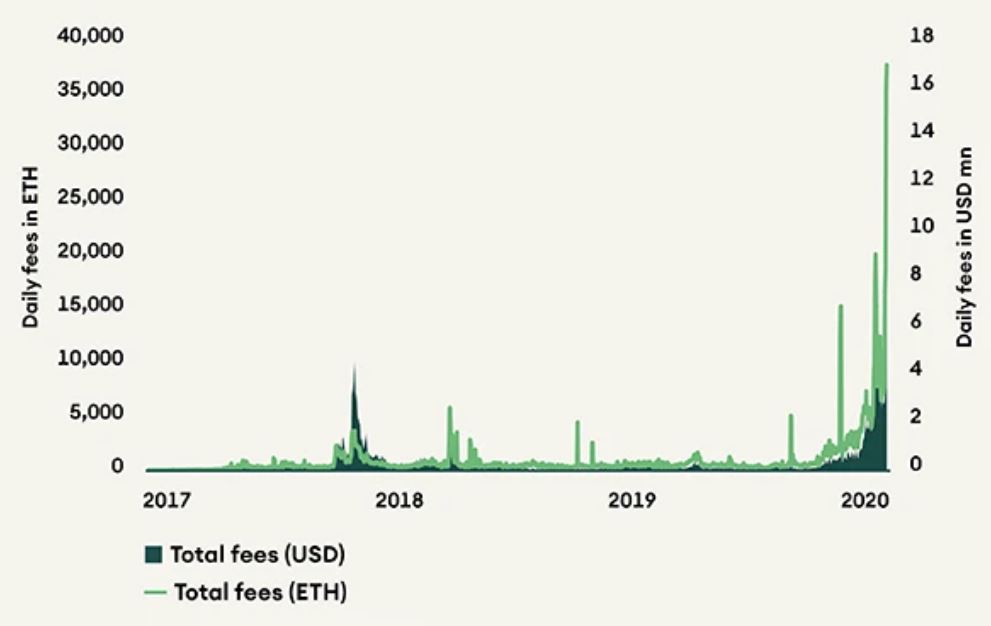 In comparison to ICOs, DeFi has an added governance feature, which can truly build community run protocols if used correctly. However, a new trend of yield farming has increased Ethereum usage and pushed gas prices higher, resulting in higher transaction costs. This prevents small investors from ‘earning’ new governance tokens. Though DeFi has improved certain practices, the current trend in DeFi is not sustainable in our view.

The current state of DeFi

Before we dive into why yield farming and its current pace are unsustainable, readers should be familiar with a few aspects.

The roots of the current environment can be traced to the emergence of Synthetix. Synthetix developed a way to distribute rewards to liquidity providers automatically, which became the basis for liquidity mining. Compound further championed the new form of token distribution.

Figure 4: How Liquidity Providers hop from one protocol to another 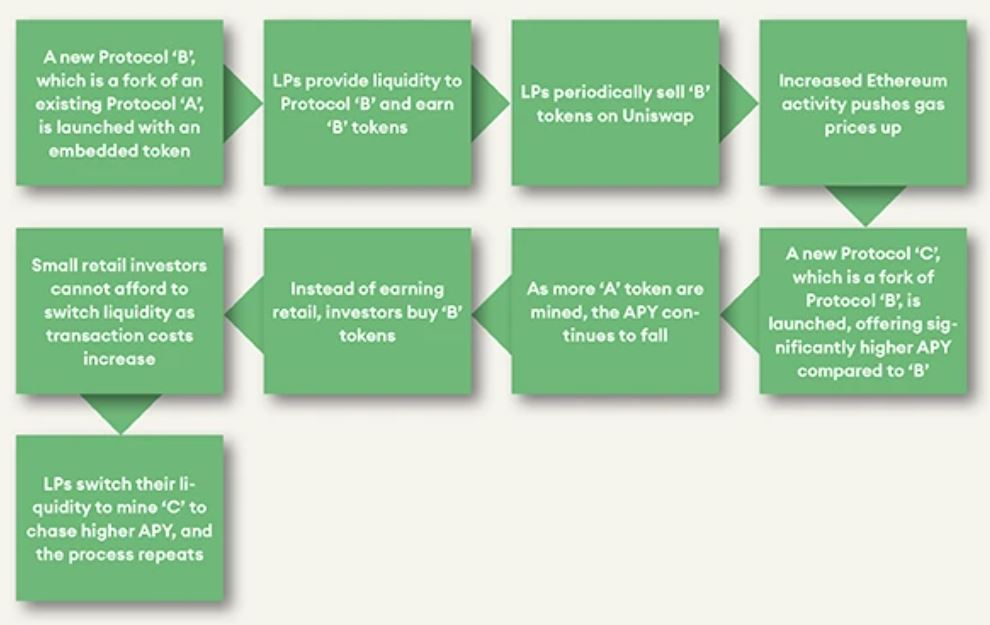 Gas fees have been pushed higher due to the increased usage of the Ethereum blockchain. A typical Ethereum transaction cost USD 8 at the market peak, and complex transactions involving un-staking or staking tokens to different liquidity pools cost more than USD 100. High Ethereum gas fees prevented small investors from rotating liquidity to maximise their yield. Instead, small investors bought new protocol tokens from Uniswap expecting that they would be able to sell much higher. Lower supply and liquidity pushed the prices higher. Some of the tokens jumped hundreds of percentages in one day, further incentivising farming these tokens. As old tokens appreciated in price, yield farmers sold old tokens for massive gains and began to farm new tokens that offered higher APYs.

Yield farmers made money by hopping from one protocol to another. As long as there are buyers for new protocol tokens, yield farmers can continue jumping among protocols. When buyers stop accepting the other side of the trade, this deranged activity will be arrested. Clearly, this trend is not sustainable. A significant correction in markets will stop buyers from buying tokens from new forks that are not distinct from their predecessors and thus have no defensibility.

Does this mean that all the yield farming is manic and lacks merit? Absolutely not. One example we want to stress in this article is Yearn Finance. Yearn Finance distributes its token, YFI, through liquidity mining. Yearn is not a direct fork of any other protocol and has a distinct value proposition.

What is Yearn Finance?

In the simplest form, Yearn Finance automates yields for protocol users. One can think of it as a smart savings account. For traditional investors, it helps to think of the following analogy: Yearn Finance is a protocol that rests on top of a banking layer and switches deposits to the bank that offers the highest deposit rates.

Yearn was built by Andre Cronje as iEarn. While managing stablecoins for friends and family, Andre decided to automate it using on-chain oracles and smart contracts.

Though Yearn Finance offers a wide range of products, the most relevant for our discussion are vaults. Vaults implement strategies that fetch the best yield. There are two types of vaults: yVaults and Delegated yVaults. yVaults are simply yToken containers. Delegated vaults allow users to maintain exposure to an asset and use vault strategies to earn a yield. For example, the delegated Link vault allows users to lock LINK on Aave and authorise it to be used as collateral. Yearn borrows stablecoins against LINK collateral based on health factors, and stablecoins earned beyond the loan value are used to purchase LINK, which is then added to the vault, thereby increasing the yield.

Anyone can propose a strategy for the vault, and if approved by the governance, the proposer receives 5% of the profits generated from the strategy.

All system-generated rewards are directed into a multisig treasury. The treasury always maintains a buffer of USD 500,000 for operational expenses, and the remaining funds are distributed to YFI staked in the governance pool. The multisig treasury activity can be monitored here.

The journey so far

The governance token of Yearn Finance (YFI) was launched in mid-July, and the founder did not allocate any tokens to himself. After he announced the token, the founder began yield farming. This strategy makes the YFI launch the fairest launch since bitcoin. At the beginning, only 30,000 YFI were minted. The community approved Proposal 0, which argued to allow more YFI minting to create ongoing incentives for the LPs. However, at the moment, the community does not agree that there is dire need to mint more YFI.

With limited supply and high usage, YFI price skyrocketed from USD 32 to a high of approximately USD 39,000, despite Andre’s assertion that it has zero value. However, we believe that YFI must have significant value for the platform to function the way it is intended.

At the time of writing, Yearn Finance has USD 1.18 billion of value locked, of which approximately 32% is locked in the vaults. As stated previously, vault strategies can be proposed by anyone. The fate of USD 432 million is decided by YFI holders. If the price of YFI is low, an attacker could acquire significant supply and then propose and approve a strategy that is detrimental to vaults. Therefore, the barrier to vault entry should be high, and the only way to maintain this barrier is through high YFI price. 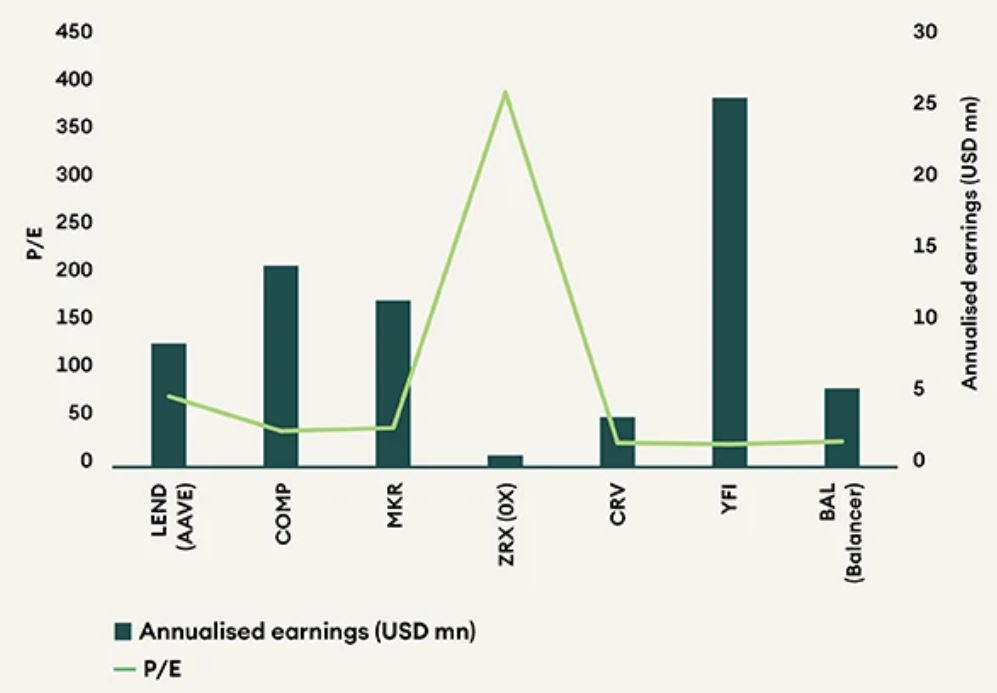 In less than two months, Yearn Finance has generated approximately USD 1 million in profits. Given the pace at which Yearn is developing new products, it is not unreasonable to expect that it will at least maintain the current run-rate.

Finally, in addition to the rise of DeFi applications that have benefited existing cryptocurrencies, new projects have been launched. Among the most notable launches, we find new platforms, such as Polkadot and Cosmos, that may offer more flexibility than the incumbent Ethereum platform because they create the basis for the interoperability of blockchains (i.e. they allow different blockchains to speak to each other).

Although the example above does not fully represent the significance of oracles, imagine how many insurance products and investment solutions depend on simple and observable triggers. Many of these projects could be fully digitised in smart contracts if the trigger could be reliably observed.

DeFi has been yet another interesting experiment in token design and governance of open source protocols. DeFi has also provided impetus to other sectors such as oracles and insurance.

The liquidity mining trend is not sustainable and may end with a bust that will decimate most of the newly forked protocols. However, just as a few ICOs survived the test of time, we think that DeFi protocols that add genuine value, such as Yearn Finance, will continue to thrive.