You are at:Home»Focus»Background»Bitcoin – In a class of its own

Bitcoin is rather hard to classify as an asset class. It shares some similarities with already existing classes but due to its unique collection of similar yet often non-overlapping attributes, it never quite fits any established mould. We explore the history and future of Bitcoin as an asset class.

Since its creation following the financial crash in 2008, Bitcoin has seen meteoric – and volatile – growth: 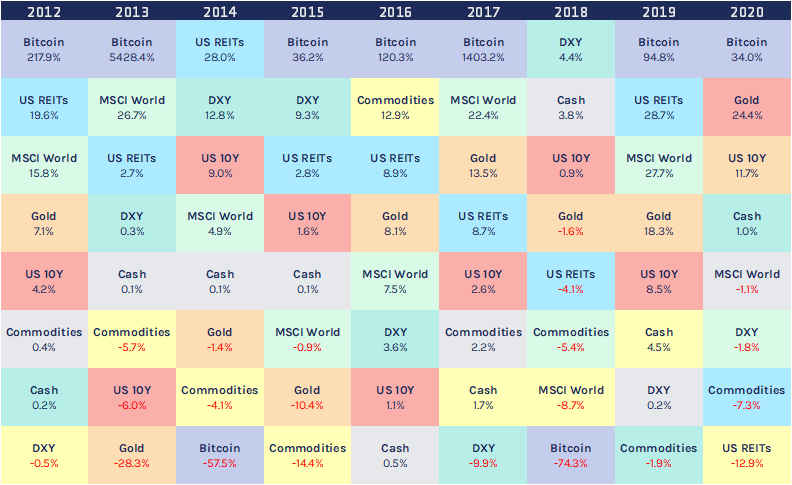 However, there has been much debate over the years among long-term investors with existing portfolios as to which “bucket” the best performing asset of the decade should sit. Is Bitcoin a commodity, currency, a type of tech stock, an amalgamation of all three, or a completely new asset class in its own right?

What is an asset class?

There is no universally accepted definition of asset classes. In 2005, the Yale University Endowment stated;

“Because investment management involves as much art as science, qualitative considerations play an extremely important role in portfolio decisions. The definition of an asset class is quite subjective, requiring precise distinctions where none exist.”

Consequently, while we can backtest to help define digital assets, we also must emphasise the qualitative considerations.

One broadly accepted definition of an asset class, however, is that it is expected to exhibit different risk and return investment characteristics and perform differently in certain market environments. They are then often split into real assets (e.g. property) and financial assets (e.g. bond), we believe cryptographic assets sit outside these as their own supergroup.

Bitcoin’s classification varies across the world.

In the United States, for example, the IRS (Internal Revenue Service) taxes bitcoins as property, the SEC (Securities & Exchange Commission) classify different types of digital assets (like ether, XRP and litecoin) on a case-by-case basis, and the CFTC (Commodities Futures Trading Commission) regulates Bitcoin as a commodity. To further add to the confusion, many digital assets have a moniker of “currency”, but we believe is unhelpful as it falls outside of commonly applied definitions.

To better understand where Bitcoin fits, we need to understand its characteristics as a potential investable asset. Satoshi Nakamoto, the pseudonymous author of the Bitcoin whitepaper, “Bitcoin: A peer-to-peer electronic cash system” highlights that the goal of the bitcoin network was to build an electronic payment system around cryptographic proof instead of trust. In effect, the creation of a parallel monetary system built on global, open-source software and networks instead of people / reputation.

Many attempts have been made at boxing in bitcoin into the pre-existing frameworks of current asset classes, but due to its unique collection of similar yet often non-overlapping attributes, it never quite fits any established mould.

In addition, investor perception of Bitcoin has significantly influenced its behaviour in the past, which in turn influences its performance within different macroeconomic environments leading back to questions of classification.

Bitcoin perception is changing over time, its image as a money laundering vehicle has subsided, with investors now taking a much keener interest in it. This is highlighted in the chart below, where news story counts of potential money laundering were much more prevalent in 2013-14 but have since subsided, while counts of Bitcoin as an investment have become more of a focus. 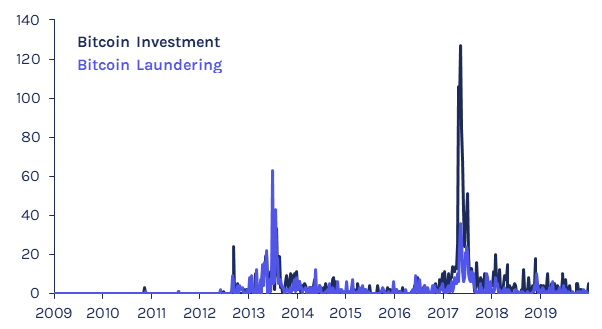 Understanding which fundamentals are the “true” drivers of bitcoin’s performance might be impossible so long as speculative demand remains the primary driver of price action. This leads us to the situation where bitcoin may have been one thing in the past, another thing now, and will be yet another thing in the future.

Nevertheless, if we are to examine bitcoin in terms of its investability, we believe there is a necessity to classify it according to its likely performance in a mature state, where investors are more settled as to its identity performance through the economic cycle. To do this, we must analyse bitcoin based on its economic fundamental characteristics, de-emphasising past and current price performance.

In its growth phase, bitcoin has behaved much like a tech stock

Having started its life at a price of zero, it is hardly surprising that bitcoin’s investment performance, like that of successful startups, has been stellar. As a potentially disruptive technology, Bitcoin’s risk profile is rather similar to that of a technology stock: if it reaches its potential, the value of both the system and its native asset could be immense, but at the same time, there is a non-zero chance that it fails entirely, possibly leaving the value of bitcoins close to zero.

These characteristics influence which type of investors are willing to speculate on bitcoin. This, in turn, influences how the aggregate investor pool interacts with the asset. If bitcoins are perceived as a more liquid version of a tech start-up stock, this is likely to cause its investors to treat it as a potentially high-reward, yet liquid, risk-on asset––moving in and out of it on an opportunistic basis. The markets have seemingly treated it more and more like this in the last two years, evidenced by its correlation coefficient of 0.52 versus the Social Media Equity Index, which includes companies “active in the social media industry, including companies that provide social networking, file sharing, and other web-based media applications” . 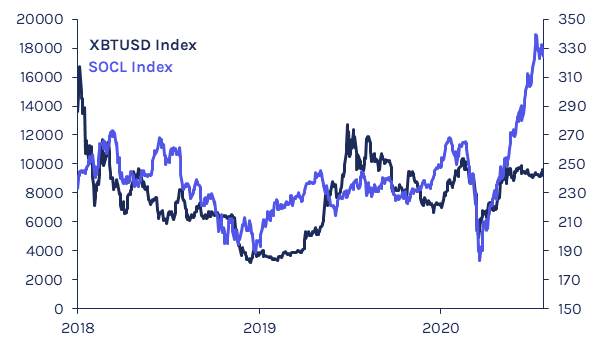 In its mature phase, we believe bitcoin will act more like a store of value

As Bitcoin as a monetary system matures, its robustness is further proven, and its risk of failure moves further and further away from zero. We believe this will cause investors to start treating bitcoin the asset differently, leading its macroeconomic behaviour to follow suit.

Alongside bitcoin’s growth in scope and size, its evolution is making it increasingly apparent that it not only has potential utility as a store of value, but is also being increasingly financialised as an asset. We believe this financialisation is self-reinforcing. As it becomes more financialised, the more it could start acting as a store of value. Evidence for this is in the $4.9 billion of assets currently in Bitcoin ETPs, funds and trusts and its growing acceptance as collateral for debt financing in fiat currencies.

Behavioural analysis from the Bitcoin blockchain supports the thesis of increased use as a store of value.For bitcoins to change hands, they must move from one address to another. Examinations of address behaviour show that the proportion of investors holding bitcoin for a year or longer has risen from 30% in 2012 to 60% today.

Proportion of BTC Investors with a Buy & Hold Strategy 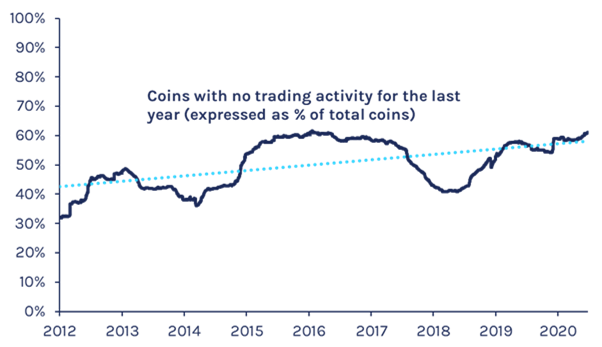 We also recognise that Bitcoin enables other functions such as secure digital ownership, providing immutable and traceable records, and acting as programmable money that can reduce administrative work. These features are important in supporting our belief that bitcoins should be defined as a unique asset class.

We have summarised what we believe are the key features of Bitcoin that define it as a unique asset class in the table below.

As more and more value is transferred into the Bitcoin ecosystem system its volatility will likely reduce. This could, in turn, cause bitcoin to act more and more like a stable safe haven and store of value.

Bitcoin is often referred to as a ‘digital gold’. Whilst we think this theory is yet to be fully proven, one can draw comparisons with gold volatility.

Gold purchased as an investment really only took off after the 1970’s. The Gold Reserve Act of 1934 had made the possession of gold illegal, and it was only in 1975 when the United States once again made it legal to own and trade in physical gold, and currencies were allowed to float freely away from the Bretton Woods system. 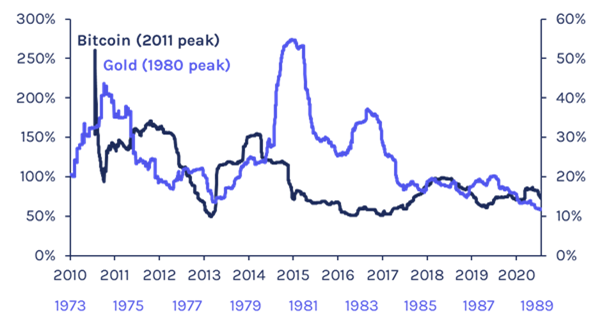 Gold slowly became financialised in the mid-1970’s through to the early 1980’s. As this happened, its annualised volatility declined from its peak of 50%. This was not a straight line down due to high inflation in the late 1970’s, however, its downwards trend remains intact. This is also a common trend amongst small cap companies that progress to large caps. Recently, bitcoin has experienced several multi-month-long periods of volatility against key developed market equity indices.

Where should bitcoin sit in the economic cycle?

Bitcoin combines the growth opportunities of technology with the potential of features akin to stores of value. Bitcoin’s supply was designed to be somewhat similar to the supply growth rate of gold, and its emission curve is hardcoded into the protocol. The supply of bitcoin is therefore genuinely limited, whereas the supply of other assets such as the US dollar are potentially infinite. During periods of economic uncertainty and if the US dollar weakens, bitcoin is likely to benefit in the same way as gold. 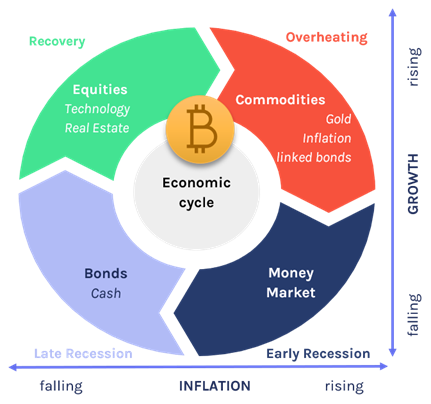 In this way bitcoin is similar to banks in that they tend to sit in the middle of the economic cycle, yet (to some extent) are exposed to economic growth. More closely though, it is at least currently likely linked to technological growth rather than broader economic growth. What remains challenging to reconcile is that technology gets increasingly utilised during times of economic weakness by organisations to save costs.

This further strengthens our thesis that bitcoin in its initial phase could be relatively immune to the broader economic cycle. However, we will only know this when bitcoin has weathered one or more full economic cycles. Recent data on inflation suggests, as we expect, that there is a small but growing link between Bitcoin and inflation and we believe these observations warrant further research.

If bitcoin’s financialisation continues, it is unlikely that it will be able to remain completely insulated from the social and financial systems. Consequently it seems prudent to expect increased correlation to other asset classes in times of crisis and we indeed observed this exact outcome during the COVID panic of March 2020.

In a class of its own

We do not believe bitcoin fits any currently established asset class moulds. In the past its characteristics made it much akin to a tech growth stock, but we believe this is changing.

Because of its characteristics (scarcity, liquidity, high uptime), evidence suggests investors are increasingly using it as a store of value. This has started a self-reinforcing process of financialisation which we believe will lead to increasing use as a store of value. It is important to highlight that this is unlikely to detract from its other compelling functions such as digital ownership, security, providing immutable and traceable records as well as programmable money.

The mere possibility that it may undergo such a transition towards a store of value raises its future potential market capitalisation ceiling closer towards those of traditional safe havens like gold or US treasuries.