The reporting week initially began promisingly, however, a selling wave that began on Tuesday put an abrupt end to the dreams of the bulls. At the close of the previous week on Sunday at $51’800, trading above the $50’000 mark was registered for the first time in 113 days. Accordingly, the trend of rising prices, which had its origin in the previous reporting week, was continued on Monday and reached another daily high of $52’698. Tuesday then turned out to be a difficult day. The first profit-taking led in the early trading hours back to the upper area of the $50’000 mark. A subsequent break of the newly created support zone led to liquidations on a large scale, which resulted in daily lows below $43’000. At the close of trading, the situation eased a bit and the price stabilized at $46’755. The roughly 20% percent drop in the previous day’s price calculated from the extreme levels was acknowledged with further declines on Wednesday, but in more manageable amounts and so Bitcoin closed the day at $46’100 or around 1.5% lower. A Thursday with a similar closing level was followed by renewed selling pressure on Friday, which let the price go lower again from the trading day at $44’861. The weekend was characterized by a consolidation in the area around $45’000. 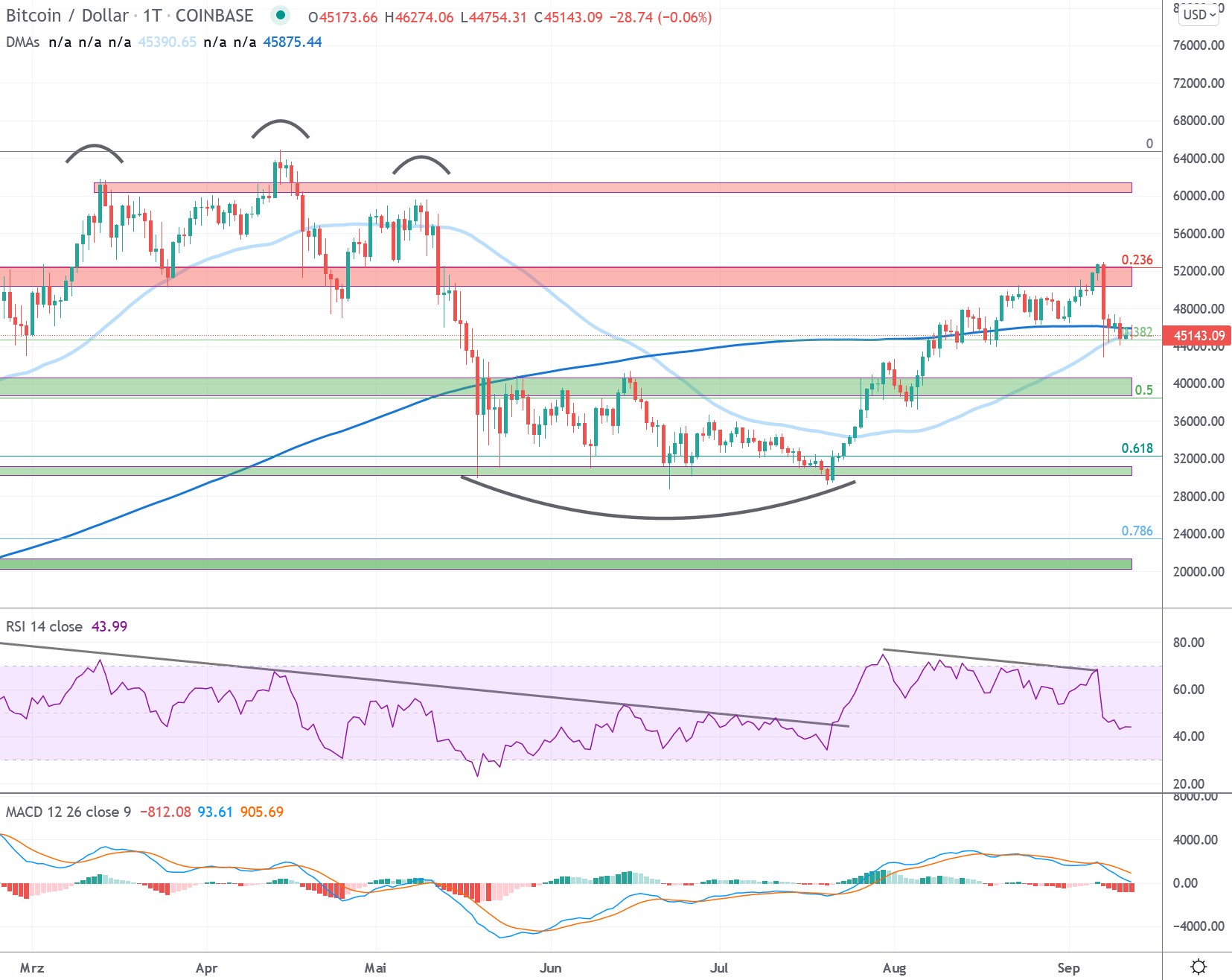 After the price plunge in mid-March 2020, a veritable countermovement established itself. This led to the resistance zones above $10’000. After an initial rejection, and a consolidation phase lasting almost two months, a breakout through the fundamental resistance zone followed on July 27, which had been established since August 2019 and had already caused Bitcoin to fail a few times to date.

The resistance zone around $10’000 was interesting in several respects. On the one hand, the 0.618 Fibonacci point of the entire downward movement, which was initiated at the end of June 2019 just below $14’000, is located here. On the other hand, the zone around $10’000 simultaneously acted as a confirmation of the still bearish trend from lower highs since December 2017 (see macro view on a weekly basis). Bitcoin was able to establish itself above the newly created support in the $10’000 area since the end of July 2020 and provided a first confirmation of a trend reversal with the break of the resistance zone around $12’200 towards the end of October 2020. In the following weeks, the positive trend accentuated and led Bitcoin through the $14’000 resistance in early November 2020 and close to the then all-time highs around $20’000 for the first time in early December, which remained untouched for 158 weeks since the bull market in 2017.

Since the breakout through the important $14’000 resistance at the beginning of November, it has been blow by blow. The breakout through the old all-time high at $20’000 saw a strong accentuation of the uptrend, which saw the Bitcoin price mark its new all-time high just below $65’000 on April 14th. The rapid upward movement was so far characterized by 3 corrections, each of which found its low point around the 50-day average (light blue line). However, the fourth correction led for the first time clearly below it and thus it also came to a violation of the trend line, which has served as support since the beginning of the year, formed by the respective daily lows. In recent weeks, this resulted in an accelerated downward trend, which led below important support zones. Subsequently, the price consolidated in the corridor $30’000 – $40’000 for three months until the recent breakout from the upper range of the corridor.

Currently, we are above the 11 weeks lasting price corridor USD 30’000 – 40’000. A “rounding bottom scenario” in the area of the 0.618 Fibonacci point, which is calculated between the start of the rapid uptrend and the new all-time high, has manifested itself in a strong upward movement.

The impressive countermovement that followed the last failed attempt to break through the $30’000 support zone came determinedly and brought Bitcoin directly to the $50’000 resistance. A sustained establishment above this area failed during the reporting week and led to a steep price correction.

As often mentioned, the $50’000 price area served as support several times between February and May and is to be classified as significant resistance. This fact was impressively demonstrated to the market during the reporting week. The negative RSI divergence recently pointed to a possible bounce. The current stabilization in the support area of $45’000, near the 50-day average, is to be seen positively for the time being. The zone immediately serves as a first indication of the market condition. A further drift should end in the region of $41’000 at the latest, in order not to endanger the positive momentum since the end of July. A possible longer consolidation, marked by a series of lower daily closing prices, carries the risk of an establishing “bull trap”. 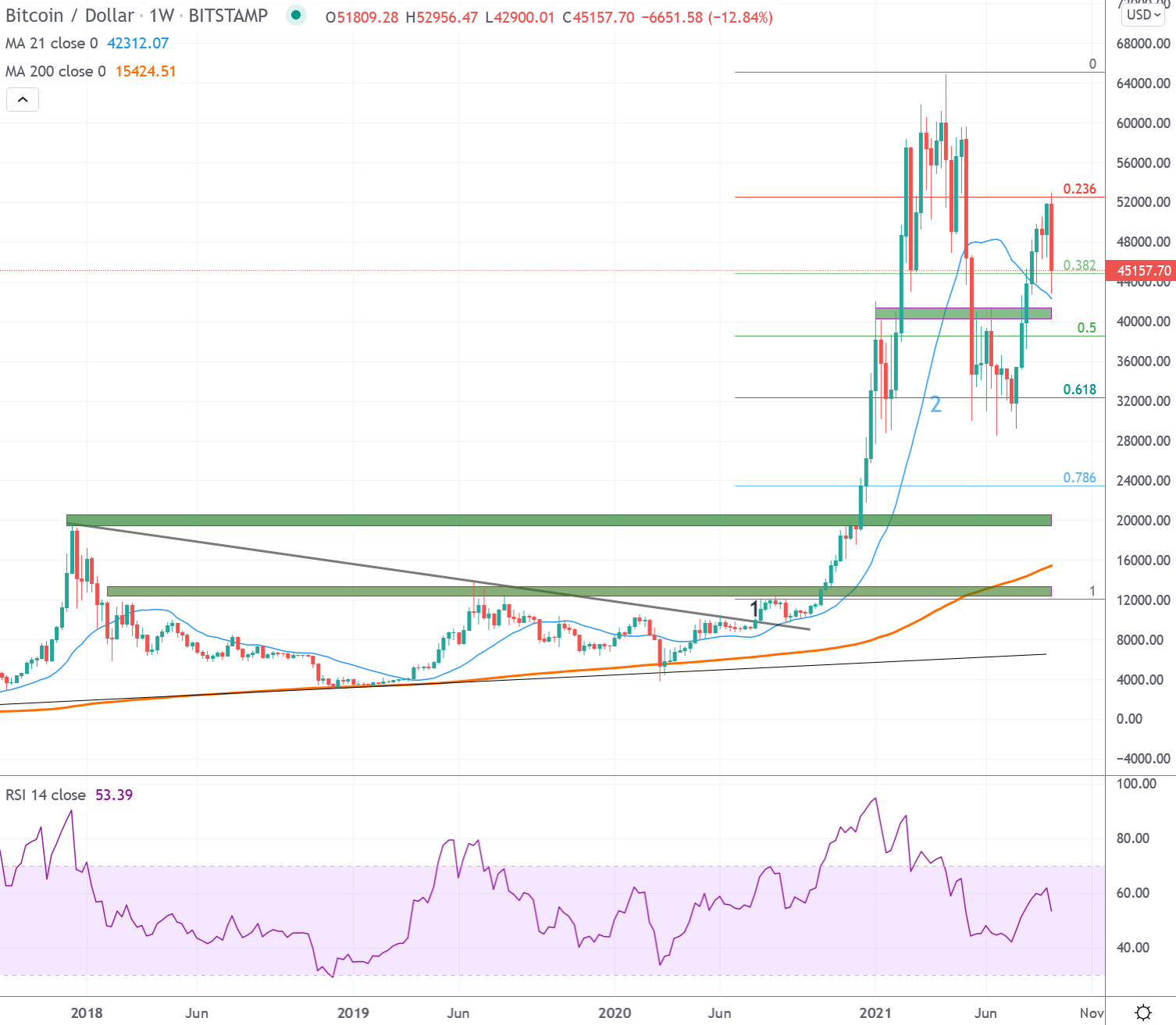 Bitcoin was able to set a higher high above $10’000 for the first time in the weekly interval in 2020, which broke the prevailing bearish trend since December 2017. This broke the series of lower highs that lasted for 135 weeks (1).

Since this first overcoming of the bearish trend, the signs for a valid trend reversal intensified. With the push through important resistance zones and a continuous development above the 21-week average (2), the probabilities for a renewed reaching of the all-time high created in 2017/18 increased visibly. This was accomplished in mid-December 2020. This was followed by a strongly accentuated price discovery above this historical mark, which produced a new all-time high of $65’000 in mid-April. A consolidation initiated since then ended in a veritable price slide that brought Bitcoin back to the $30’000 mark in just two weeks. A subsequent breakout from the 10-week $30’000 – $40’000 consolidation area will bring Bitcoin back to the $50’000 resistance.

The price movements in the past year created a good foundation to sustainably climb to new spheres beyond the all-time highs reached in 2017. The break of the $20’000 mark impressively demonstrated the power of the upward movement that has been established since October. The rapid price increase was now abruptly interrupted with a price drop, which even brought Bitcoin below the 21-week average (2) that has defined reliable bull or bear market phases in the past.

Bitcoin was able to leave behind the three-month correction phase in the $30’000 – $40’000 zone. The consolidation took place in the interesting 0.618 Fibonacci area since the start of the bull market. After breaking out of the upper price band of the three-month corridor, a continued significant counter-move took the price back to the $50’000 zone within the past 3 weeks while negating a forming shoulder-head-shoulder formation.

With the holding of the $30’000 support in the 0.618 Fibonacci zone, a scenario of a continuing price development, which eventually leads beyond the existing all-time high, remains intact. Such a scenario is reinforced by sustained price action above the $40’000 support zone and a recapture of the 21-week moving average over the near term. A presumed “make it or break it” situation is emerging in the current price area in the following weeks. Here, the market decides whether a price discovery above the all-time high should take place or whether the current upward movement below the all-time high ends in a “bull trap” as in January 2018.