Bitcoin was able to leave the previous week’s lows around the 30’000 support zone behind during the reporting week. On Sunday, incipient buy orders pulled the price significantly away from the previous day’s levels and ensured a daily close at 34’709 USD. On Monday, a short consolidation in narrow trading ranges was observed at the level of 34’500. On Tuesday, follow-on buying took the price to 35’904 USD and back to the area that served alternately as a support and resistance zone in the consolidation phase that lasted over 46 days. Accordingly, the price stood at this level on Wednesday and closed slightly lower than the previous day at 35’048 USD. Continuing declines on Thursday led to a daily low at 32’687 USD and a daily close at 33’528 USD. On Friday, trading at a slightly higher price level ended the previous 2-day correction phase. This was followed by two trading days with a rising price trend over the weekend, which brought the Bitcoin price back to the technically significant zone of 36’000 USD. 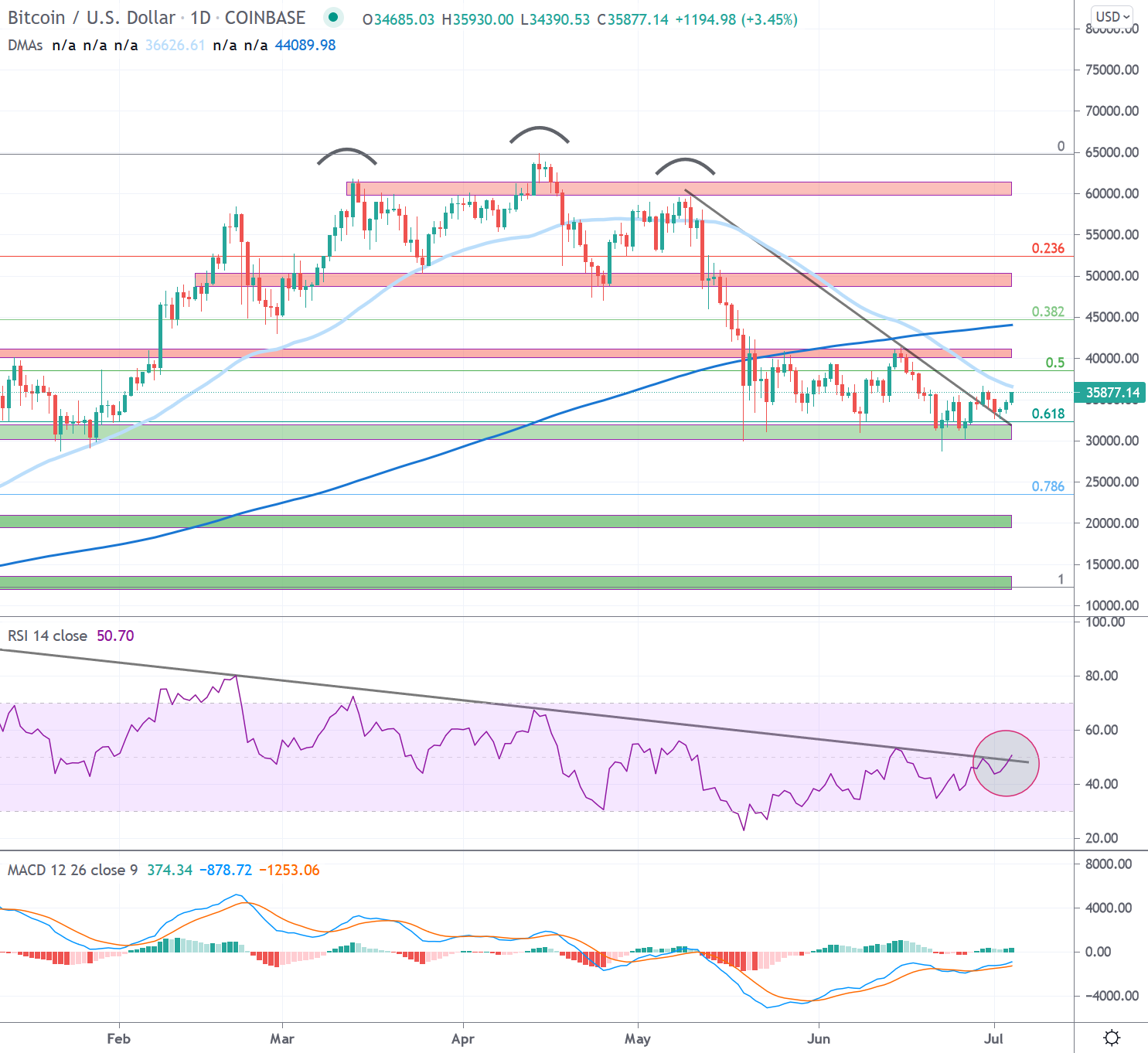 After the price plunge in mid-March 2020, a veritable countermovement established itself. This led to the resistance zones above 10’000 USD. After an initial rejection and a consolidation phase lasting almost two months, a breakout through the fundamental resistance zone followed on July 27, which had been established since August 2019 and had already caused Bitcoin to fail a few times to date.

The resistance zone around 10’000 USD was interesting in several respects. On the one hand, the 0.618 Fibonacci point of the entire downward movement, which was initiated at the end of June 2019 just below 14’000 USD, is located here. On the other hand, the zone around 10’000 USD simultaneously acted as a confirmation of the still bearish trend from lower highs since December 2017 (see macro view on a weekly basis). Bitcoin was able to establish itself above the newly created support in the 10’000 USD area since the end of July 2020 and provided a first confirmation of a trend reversal with the break of the resistance zone around 12’200 USD towards the end of October 2020. In the following weeks, the positive trend accentuated and led Bitcoin through the 14’000 resistance in early November 2020 and close to the then all-time highs around 20’000 USD for the first time in early December, which remained untouched for 158 weeks since the bull market in 2017.

After the recent price decline, the Bitcoin price continues to consolidate in the new price corridor 30’000 – 40’000 USD. The price action is now taking place below the 50-day average, as well as the 200-day average. The latter has not been undercut since April 2020. The bullish structure is battered, but not yet completely broken. The 30’000 support zone remains interesting, which served as the bottom of the current sell-off for the time being. This area also represents the 0.618 Fibonacci point between the start of the rapid uptrend since late October and the all-time high of mid-April.

Bitcoin managed a push through the trend line formed by the series of lower daily highs since May during the report week. This breakout was validated by a “retest” and we are currently in the 35’000 – 36’000 area – a zone that has often acted as a support and resistance zone during the consolidation phase since May 19.

The positive momentum built up in the reporting week is additionally underlined by a break of the downward trend of the RSI indicator, which at the same time depicts a bullish divergence to the price action. The omens are thus good for the bulls, but a returning bullish sentiment can only be taken seriously if the 40’000 resistance zone is continuously overcome. This resistance area, consisting of historical price action from January, the current consolidation phase, as well as the 200-day average, serves as a competent indication of a sustained return of bullish momentum.

However, the positive momentum built up during the reporting week would be clouded or invalidated by a retest of the 30’000 zone and would make a visit to the old all-time high of 20’000 USD seem likely. 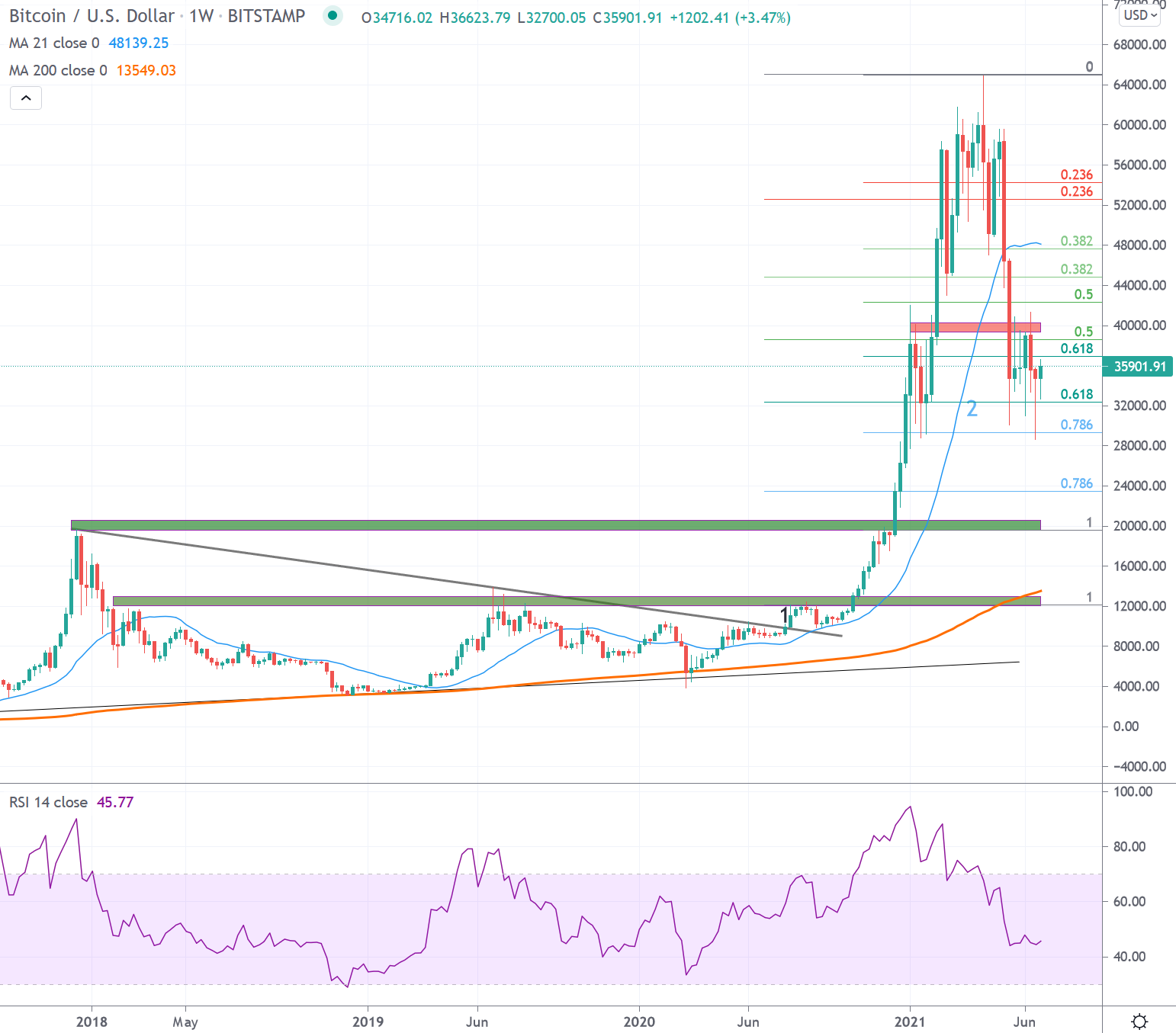 Since this first overcoming of the bearish trend, the signs for a valid trend reversal intensified. With the push through important resistance zones and a continuous development above the 21-week average (2), the probabilities for a renewed reaching of the all-time high created in 2017/18 increased visibly. This was accomplished in mid-December 2020 and was followed by a strongly accentuated price discovery above this historical mark, which produced a new all-time high of 65’000 USD in mid-April. A consolidation initiated since then ended in a veritable price slide, which brought Bitcoin back to the 30’000 USD mark in just two weeks.

With the price movements in the past year, a good foundation was created to sustainably climb new spheres beyond the all-time highs reached in 2017. The break of the 20’000 USD mark impressively demonstrated the power of the upward movement that had been established since October. The rapid price increase was now abruptly interrupted with a price drop, which even brought Bitcoin below the 21-week average (2) that has defined reliable bull or bear market phases in the past.

It remains to be seen how sustainable the current sell-off wave will be. Bitcoin had equally experienced setbacks of >50% in bull phases in the past. Depending on the point from which one calculates the Fibonacci retracements (start bull market – ATH 65k or breakout old ATH 20k – ATH 65k), we are currently in the interesting zone 0.5 or 0.618. A recapture of the 21-week average is necessary over the next few weeks for a positive picture and would also mean a break of the historical resistances from 48’000 USD. Setbacks to lower levels carry the risk of a forming shoulder-head-shoulder formation, which should be viewed negatively.