Crypto markets took a turn for the worse over the weekend, with Bitcoin (BTC) now hovering just above $16k and Ethereum (ETH) edging towards $1.1k, their lowest levels since late 2020. The FTX fallout continued after bankruptcy filings revealed the exchange owes its 50 biggest creditors a whopping $3 billion. Japanese crypto exchange Liquid, which FTX acquired in March, is the latest exchange impacted by the collapse and has since suspended trading and withdrawals. The continuing fallout from Genesis halting withdrawals and rumors of a possible bankruptcy filing from parent company Digital Currency Group will be closely watched this week.

In some non-FTX news, the Cardano blockchain will launch its own regulatory-compliant stablecoin, a $138bn fund manager is planning to enter crypto markets, and Uniswap launched two new smart contracts. 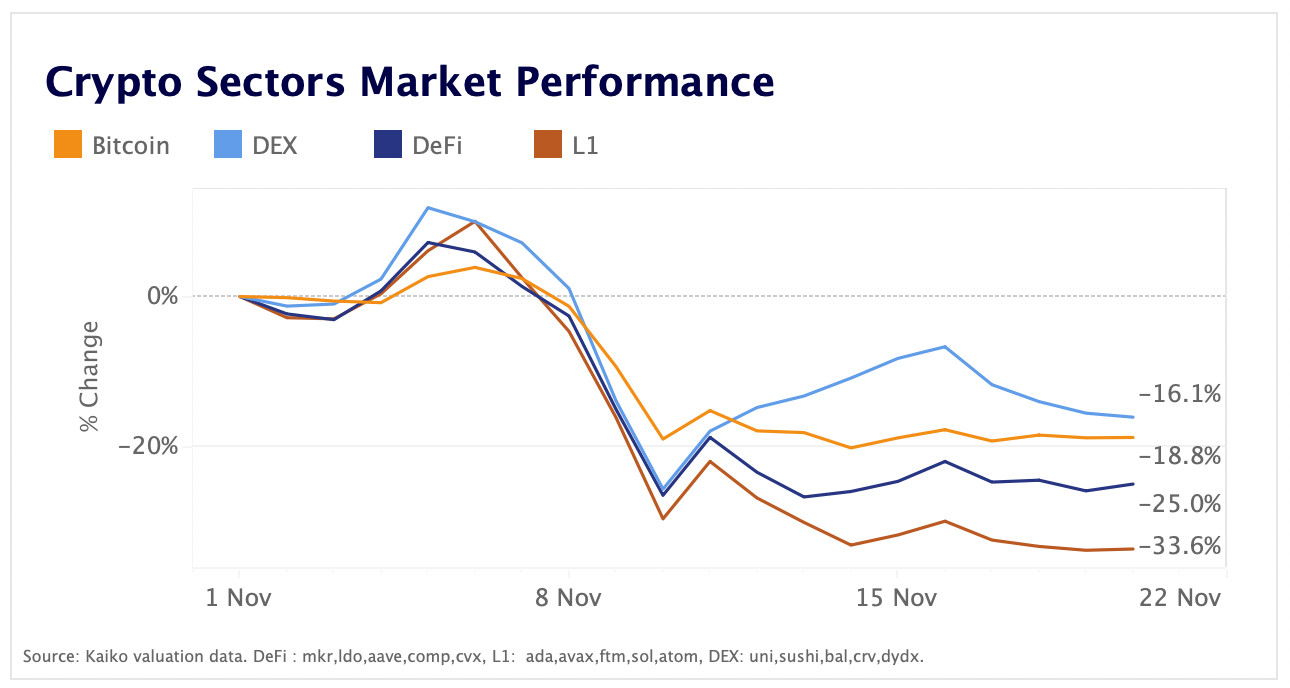 Three equally weighted portfolios tracking the composite returns of the top 5 tokens per sector show that Layer 1 tokens have plummeted by 34% since the start of November, dragged down by Solana’s SOL, which was strongly supported by FTX/Alameda. Even when excluding SOL from our simulated portfolio, L1 tokens remained the worst performers.

DEX tokens, which are down 16%, performed slightly better than BTC. Notably, the token of decentralized derivatives exchange dYdX surged by 18%, suggesting that competition on derivative markets for the gap left by FTX is heating up. DeFi projects were also strongly impacted by the risk-off shift in sentiment and are down 25%.

Trade volumes on top centralized exchanges more than halved from the week prior, falling to $100bn as traders pulled out from the market. Huobi and Bitfinex registered the largest average weekly declines of 82% and 75%, respectively. Trading activity on Gemini fell by 56% after the exchange halted their Earn program, triggering hundreds of millions in exchange outflows. Binance’s weekly trade volumes dropped 60%. 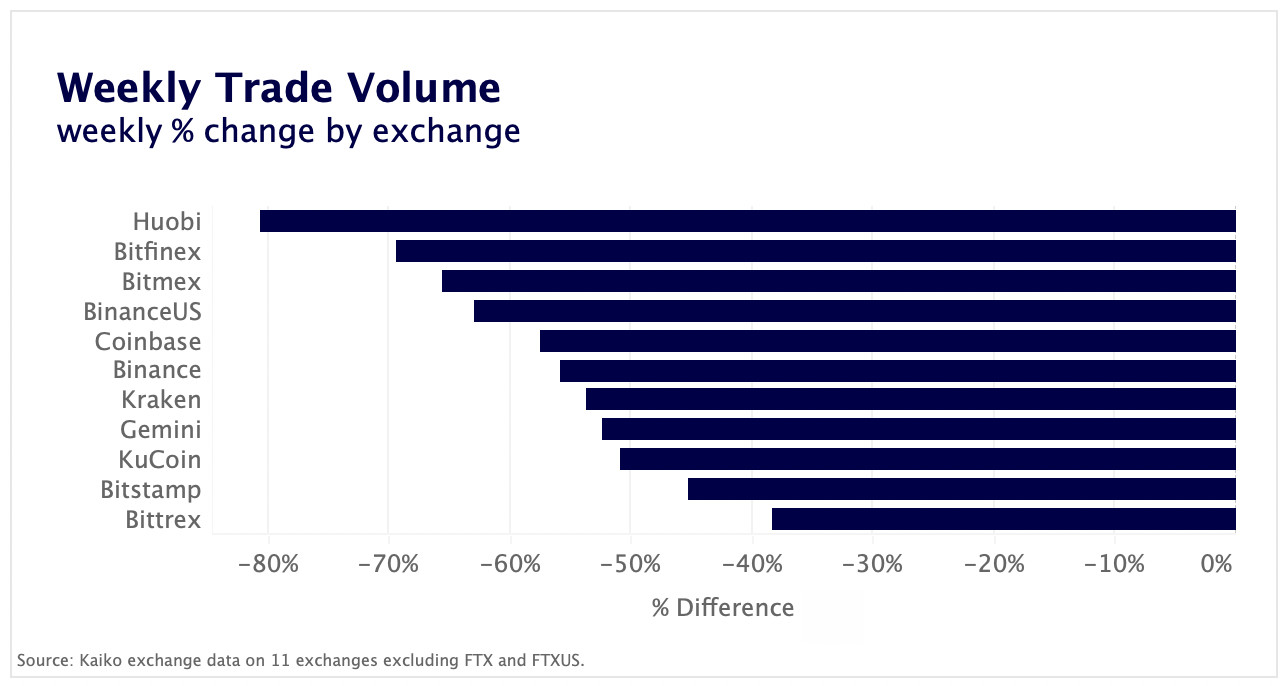 Overall, however, the gap between Binance and the rest of the market has widened significantly throughout the year, suggesting the exchange has managed to withstand the prolonged bear market better than its competitors. The weekly trading volumes on Binance remained firmly above $80bn over the past few months mainly thanks to its aggressive fee reduction.

Trading activity on Uniswap v3 also fell last week after volumes hit one of their highest levels ever in the week of Nov 7, outpacing many centralized exchanges. 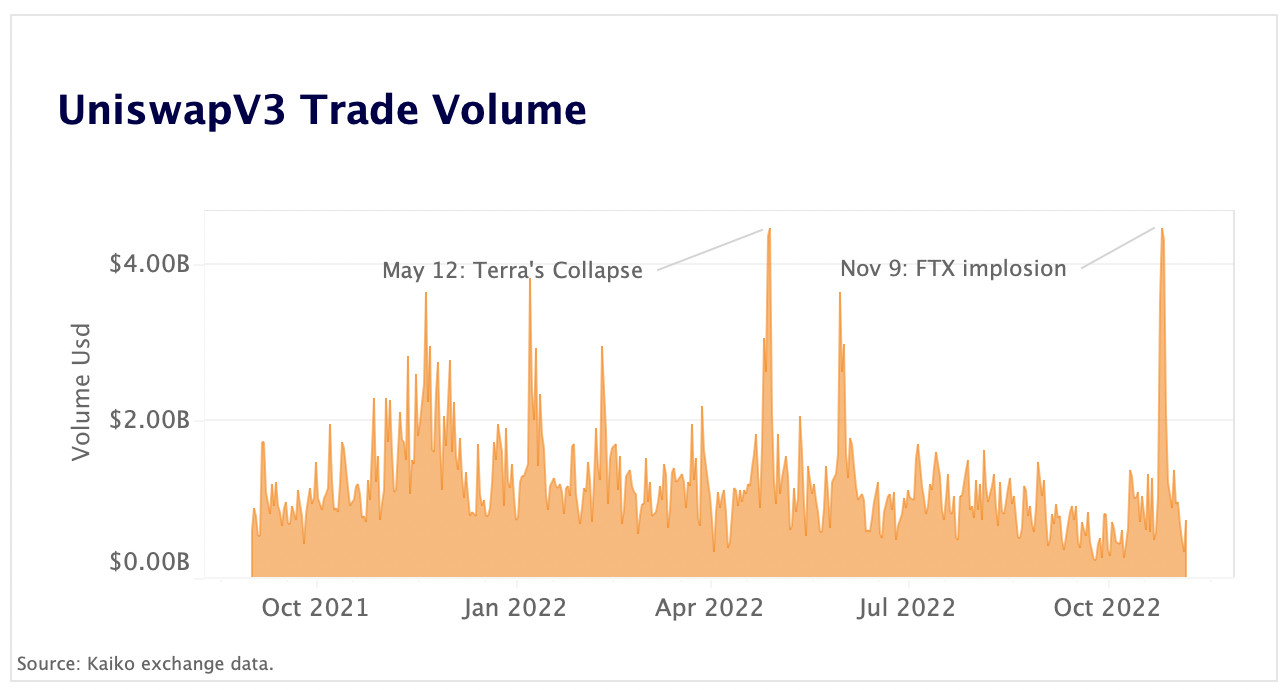 While eroding confidence in CEXs could benefit decentralized platforms, the latter remain subject to smart contract and other risks and are not insulated from the broad risk-off mood in the short term (for more in depth analysis on the winners and losers of the FTX collapse check our ongoing reporting). The overall decline in trading volume across both CEX and DEXs could add to the strain on crypto liquidity. 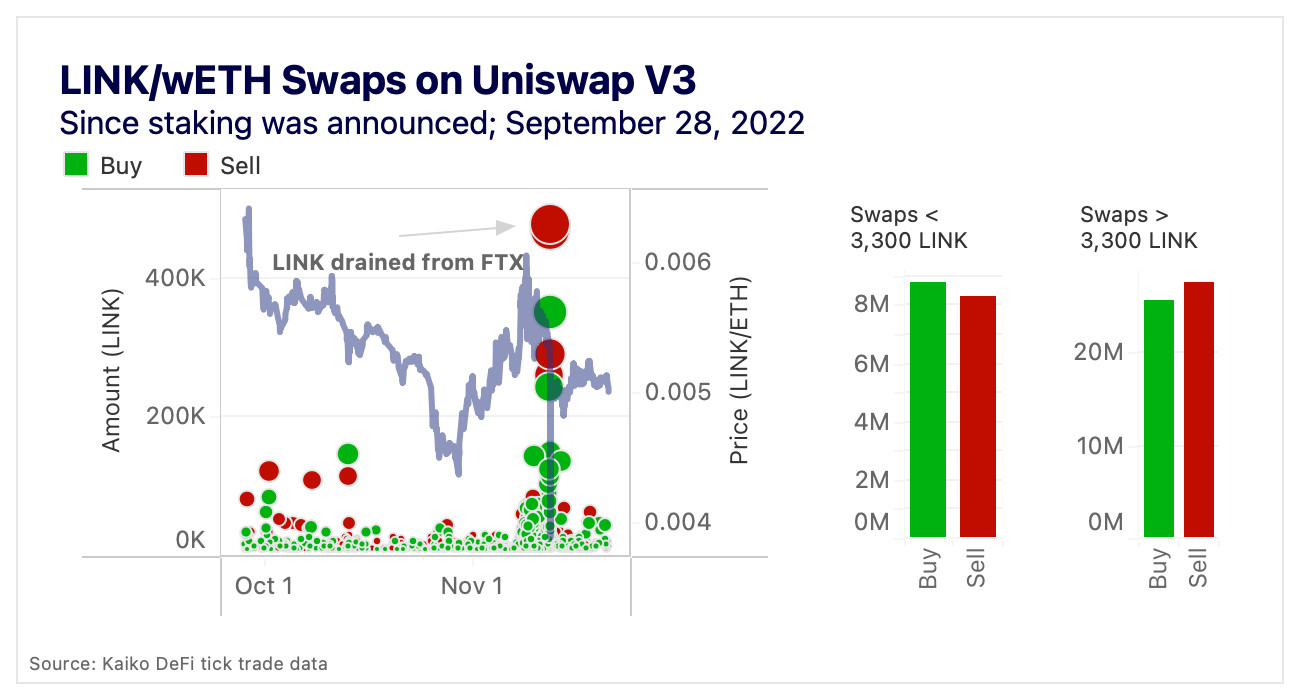 Chainlink founder Sergey Nazarov announced on September 28 that the token’s long-awaited staking program would be coming in December 2022. The update will allow long-term holders to stake up to 7,000 LINK and earn rewards for securing the network. Following the announcement, there was an uptick in volume, including some large sells as LINK’s price dipped from .006 ETH to .0043 ETH on October 29. LINK’s price surged – in both USD and ETH terms – in early November prior to the FTX saga. Since the announcement, swaps under 3,330 LINK (the average trade size for this pool) have been skewed to buys, while swaps over 3,330 LINK have favored sells, suggesting stronger retail interest in the token.

Following FTX’s collapse, an unidentified user or hacker was able to move tokens off the exchange. Kaiko’s DeFi tick trade data allows us to see that the two largest LINK swaps were from the FTX hack wallet, which conducted two large swaps of 1mn LINK each for wETH using CoW Protocol, a meta DEX aggregator. CoW Protocol routed the transactions through Uniswap V3 (both the USDC and wETH pools), Uniswap V2, Bancor, and Sushiswap, ultimately swapping nearly 1mn LINK through the LINK-wETH Uniswap V3 pool because of its superior liquidity. However, LINK’s price in the pool briefly dropped to under .0039 ETH, a low not seen since 2019 (with the exception of the Terra crash) before recovering to .005 ETH.

The 44mn LINK swapped in this pool thus far in November is at an all time high, far surpassing the previous high of 28.5mn set in September. 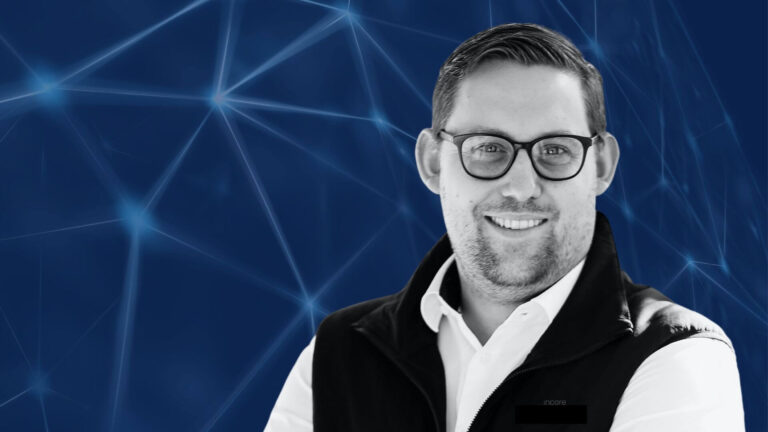 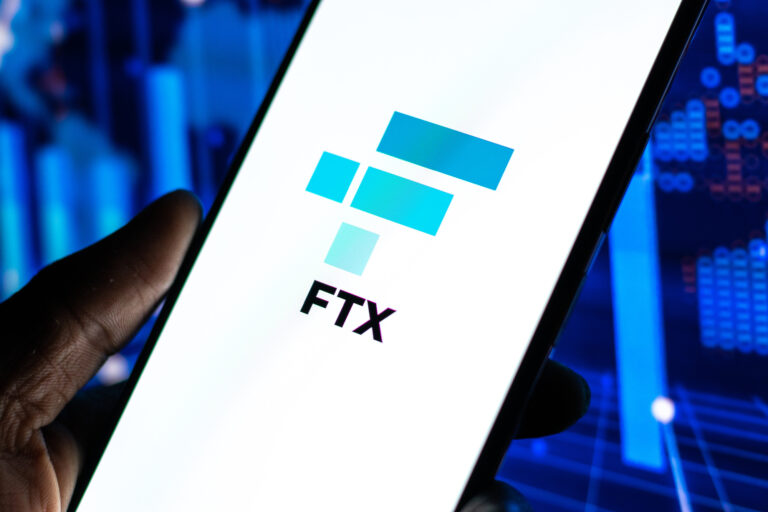 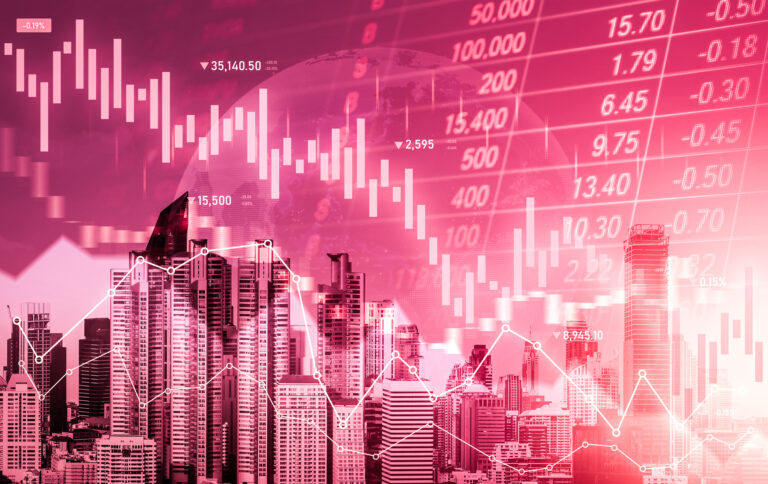 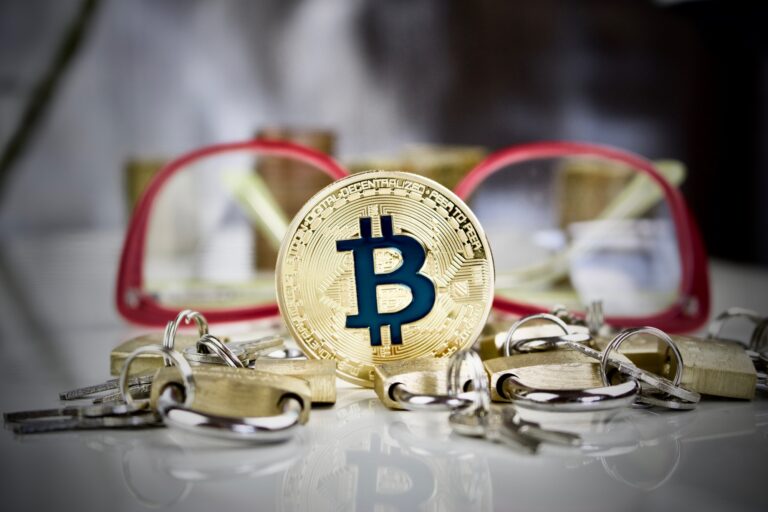 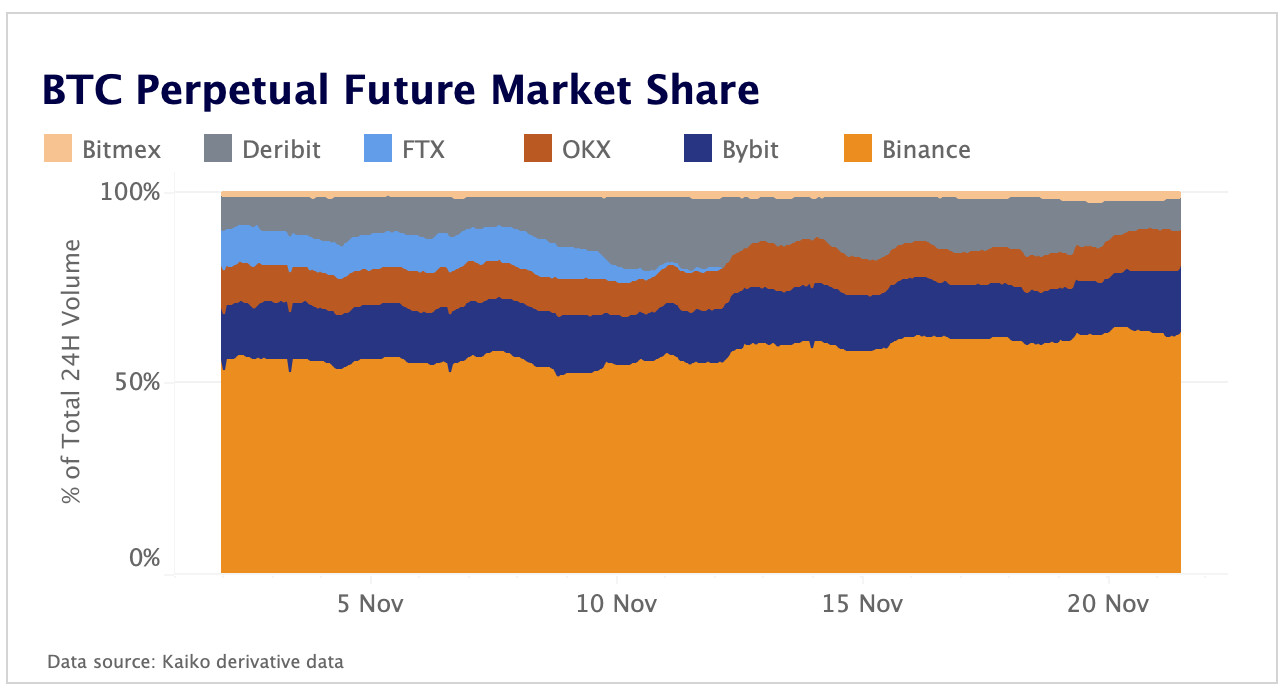 Before FTX collapsed, it commanded ~10% of the daily volume of BTC perpetual futures. Now derivative exchanges are fighting for that 10% share of volumes and unsurprisingly, it’s Binance that is winning. Since the start of November, Binance has gained 7% in market share of BTC perpetual volumes, rising from 56% to 63%, winning the vast majority of volume left behind by FTX. Bybit has won the other 3% of volume left behind by FTX, while OKX and Deribit failed to gain any market share. 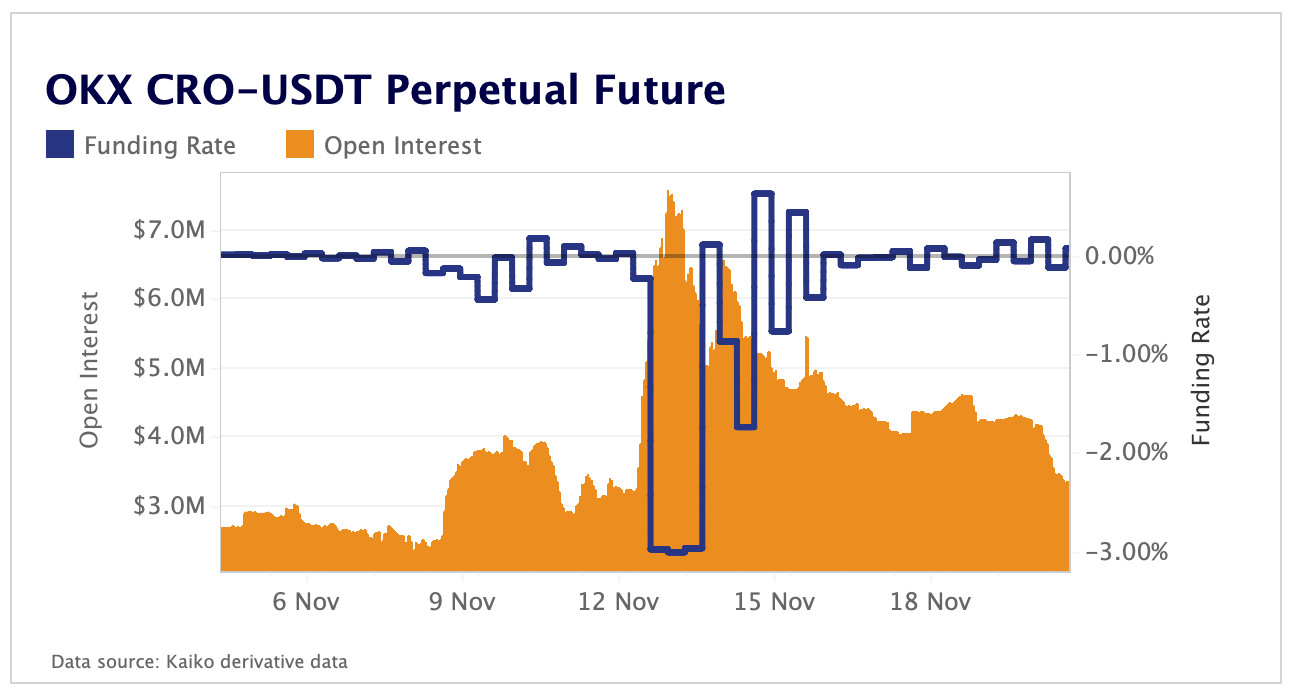 As contagion fears roiled markets last week, investors turned their attention to Crypto.com and its native token, CRO. Fears about potential insolvency and speculation that the exchange was as reliant on CRO as FTX was on FTT had investors worried. Funding rates for the token’s perpetual future plummeted to -3%, meaning short CRO traders were paying a 3% premium for their positions. However, the heavy imbalance to the short side seems to have reverted in the last few days as funding rates have returned to neutral and open interest has dropped by $4mn since its peak, easing some of the negative sentiment surrounding the exchange. 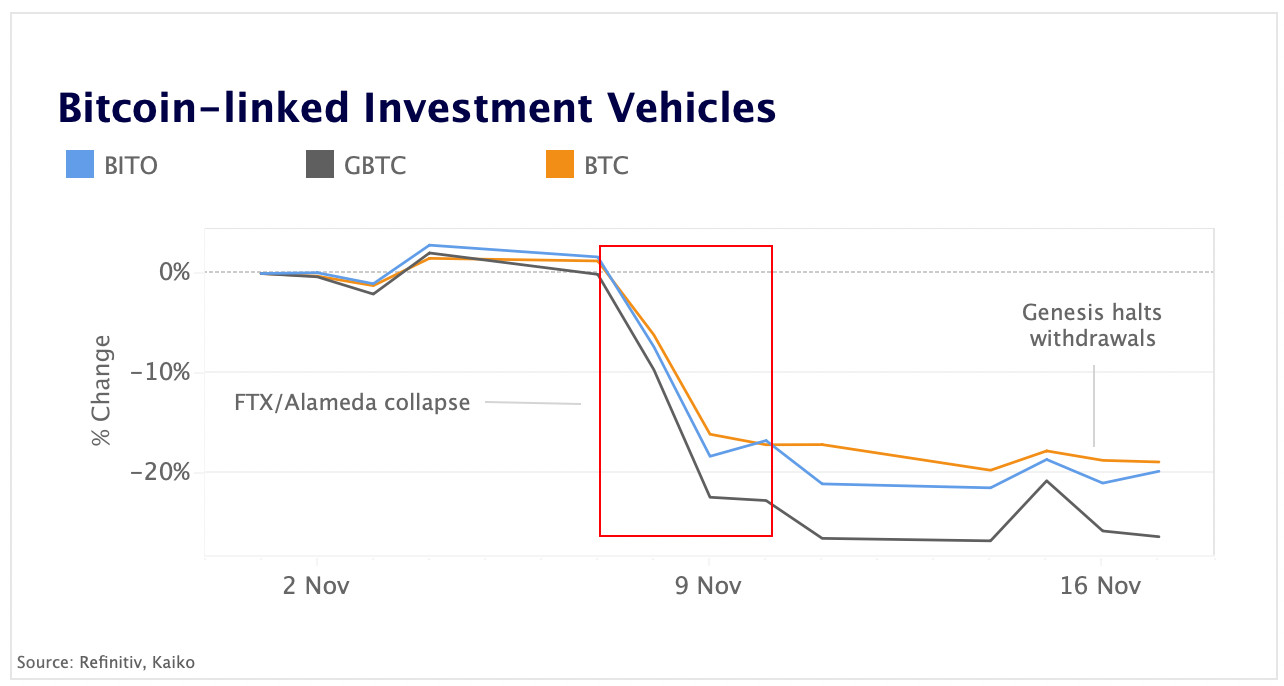 Bearish sentiment around the Grayscale Bitcoin Trust (GBTC) deepened last week due to fears that its parent company – the Digital Currency Group (DCG) could experience liquidity issues alongside its other subsidiary Genesis. GBTC remains by far the largest BTC investment vehicle, holding over $10bn worth of BTC. For context, the largest U.S. futures-backed ETF, ProShares Bitcoin Strategy ETF (BITO) manages around $540mn in assets.

Since the start of November, GBTC shares have lost 26% of their value, underperforming BTC by a large margin. This exacerbated the so-called GBTC discount which widened sharply following the collapse of FTX and Alameda, hitting a record low of 45% last week. The discount is the difference between GBTC’s share prices and the market value of its BTC holdings.

Prior to February 2021, GBTC benefited from strong institutional demand and traded at a double-digit premium to its net asset value, providing an interesting arbitrage opportunity for large institutional players. Approved share creators could borrow or buy BTC and sell GBTC shares at a premium after a lock up period of 6-months. However, the GBTC premium turned into a discount in February 2021, as buying demand weakened, resulting in losses for many investors. 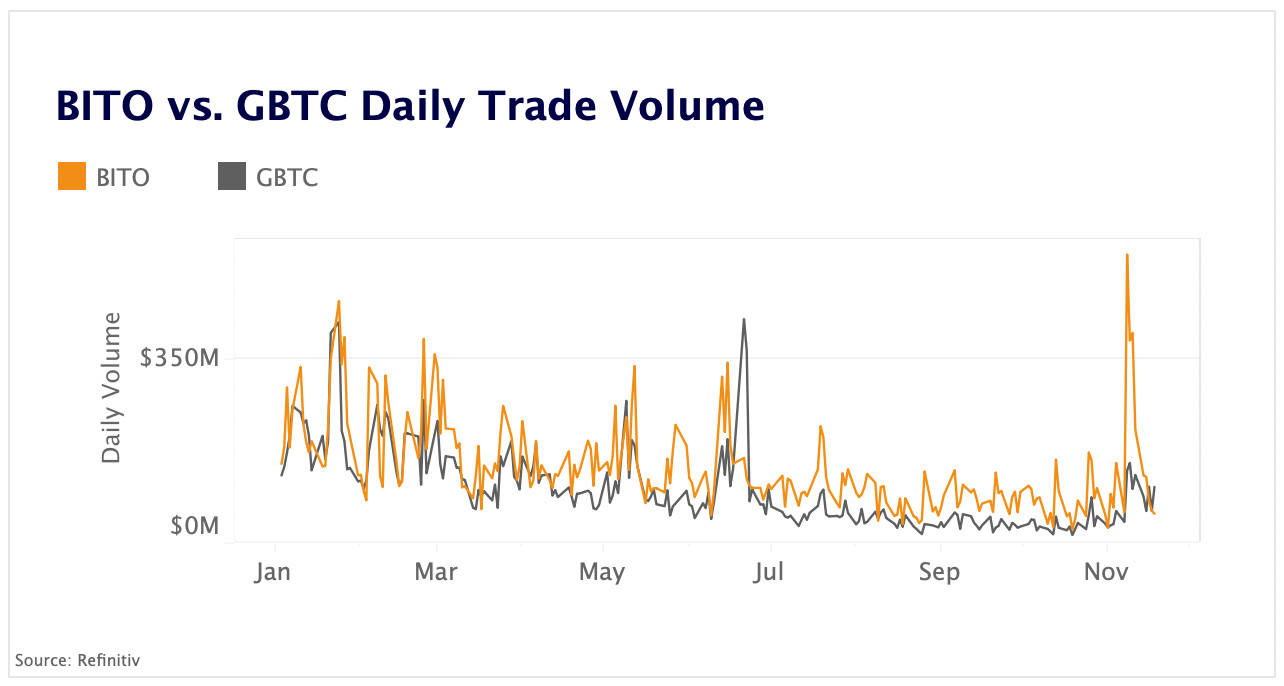 Last week’s idiosyncratic market shock led to a wide selloff in crypto and crypto-linked assets. BITO’s trade volumes hit their highest level since the ETF’s inception back in October 2021 while its assets under management are down 19% since Nov 7th. Despite surging from around $30mn to over $150mn, GBTC’s daily trade volume remained magnitudes lower than the 2021 average. As flows drifted away from GBTC over the past year, DCG has stepped in and is currently the largest GBTC holder, followed by BlockFi and ARK Investment management.