Bitcoin (BTC) closed the week down nearly 11% and is trading near 5-week lows following the rejection of the VanEck spot ETF, a growing risk-off macro environment, and a wave of long liquidations on derivatives markets. Despite the pullback, it was a huge week for fundraising in the crypto industry: Gemini raised $400 million, Paradigm announced a $2.5b venture fund, Digital Currency Group raised $600m in new credit, and a decentralized autonomous organization (DAO) raised $40m to buy a copy of the U.S. constitution (they were outbid by the CEO of Citadel). Metaverse tokens are also on the rise, with Decentraland’s MANA up 13% and the Sandbox’s SAND up 42% in a sign that investors are bullish on the future of decentralized gaming. 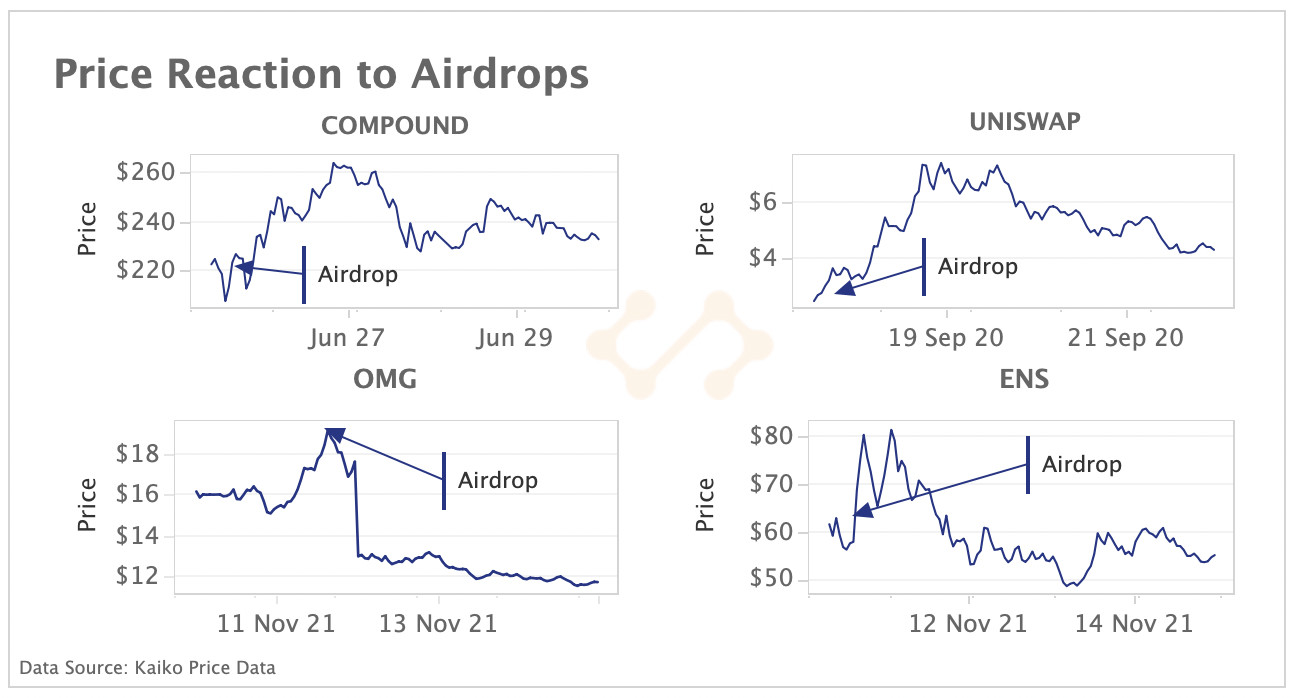 An airdrop is a mechanism by which early adopters of a crypto protocol are rewarded with the project’s native token, and at its core is designed as a marketing initiative to attract new users and raise awareness. Over the past year, a growing number of projects are employing airdrops, with mixed results. An airdrop can initially cause the price of a token to surge (charted above), but quickly collapse as traders offload their earnings. Uniswap, Compound, and Ethereum Naming Service launched their tokens as airdrops netting many unassuming early users of the protocols huge gains. However, OMG Network’s token already existed before deciding to do a different type of airdrop, and saw its token collapse 33%.

The biggest controversy surrounding airdrops involves the prevalence of sybil-farming, in which users generate multiple wallets to interact with a protocol in the hopes of receiving additional token rewards. This can artificially inflate the perceived real community for a project. Last week, ParaSwap airdropped tokens to only a selection of users to avoid this type of bad behavior, causing a twitter controversy and raising important questions over who deserves early-adopter rewards.

Bitcoin traded at a steep discount on U.K. markets throughout October 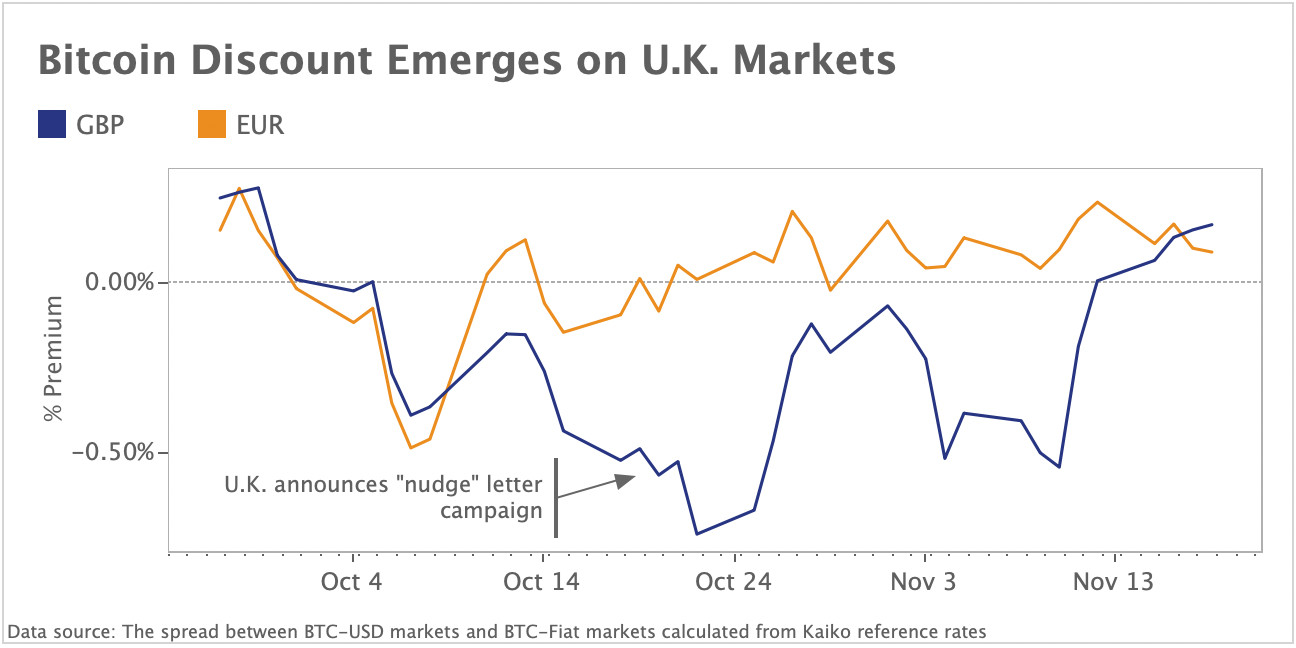 Bitcoin traded at a discount relative to the British Pound for most of the last month, likely in response to an increasingly restrictive regulatory environment in the U.K. By contrast, BTC-EUR mostly traded at a premium to USD markets throughout October. Bitcoin dropped to a low of -0.74% vs. the Dollar after the U.K. tax administration (HMRC) announced it will issue “nudge” letters to crypto asset investors. Regulators are also cracking down on the marketing of crypto products on public transport networks.

While an increasing number of countries are providing retail buyers with more regulated crypto investment offerings, the U.K. has adopted a cautious approach to crypto. Britain’s financial watchdog, the Financial Conduct Authority (FCA), banned the sale of crypto derivatives to retail customers in January, citing the complexity of these products and consumer protection worries, and in June banned Binance from operating in the country. These moves have likely dampened demand on BTC-GBP markets relative to BTC-USD. 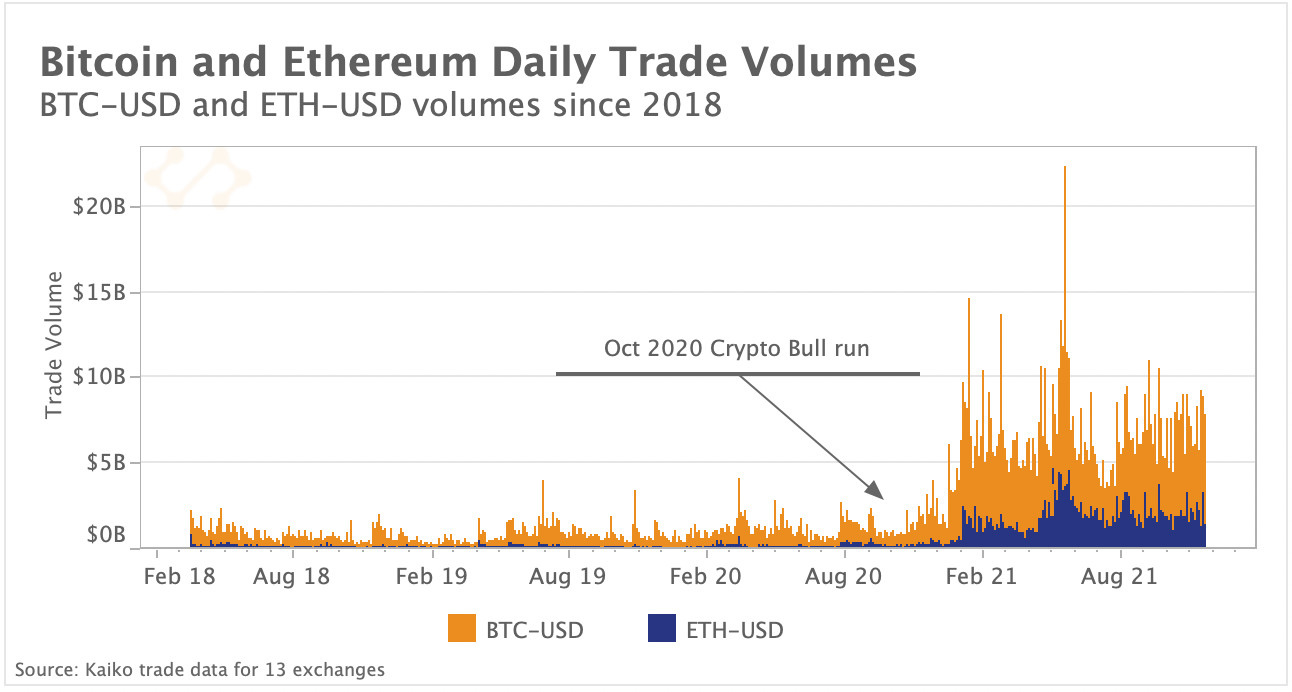 The bull run brought many changes to the crypto industry: surging venture capital investment, waves of institutional interest, massive price returns, and a global shift in crypto sentiment. One of the most visible changes has been the volume of crypto traded on the world’s biggest exchanges. BTC-USD daily trade volumes have risen fivefold from around $0.7bn to $4bn as BTC’s price surged from $10k to $60k. Ethereum has also recorded staggering growth with ETH-USD daily volume growing from an average of $0.2bn to close to $3bn in November 2021, as prices jumped 10x from $350 to $4k.

Over the past few months, volumes have remained well below all time highs which has worried some analysts, but it is important to look at this in context of the growth observed in just one year. Both BTC-USD and ETH-USD daily trade volumes in 2021 are significantly higher than levels observed before October 2020, suggesting we are still within the same market regime.

Stablecoins, which are pegged to national currencies such as the U.S. Dollar, are a key source of liquidity for cryptocurrency exchanges and over the past few years have become the most popular denominating asset for trading pairs. Above, we chart the trade volume market share by quote currency on Binance, the world’s largest crypto exchange, to gain a better understanding of which quote assets traders prefer. We can observe that over the past year, Binance USD – a USD-pegged stablecoin issued in collaboration between Binance and Paxos – has quickly gained market share, rising to nearly 13% of total volume since 2020. Tether’s USDT is still dominant at 73% while Bitcoin’s market share has fallen from 19% to 7%, a sign that traders increasingly prefer trading with stablecoins. 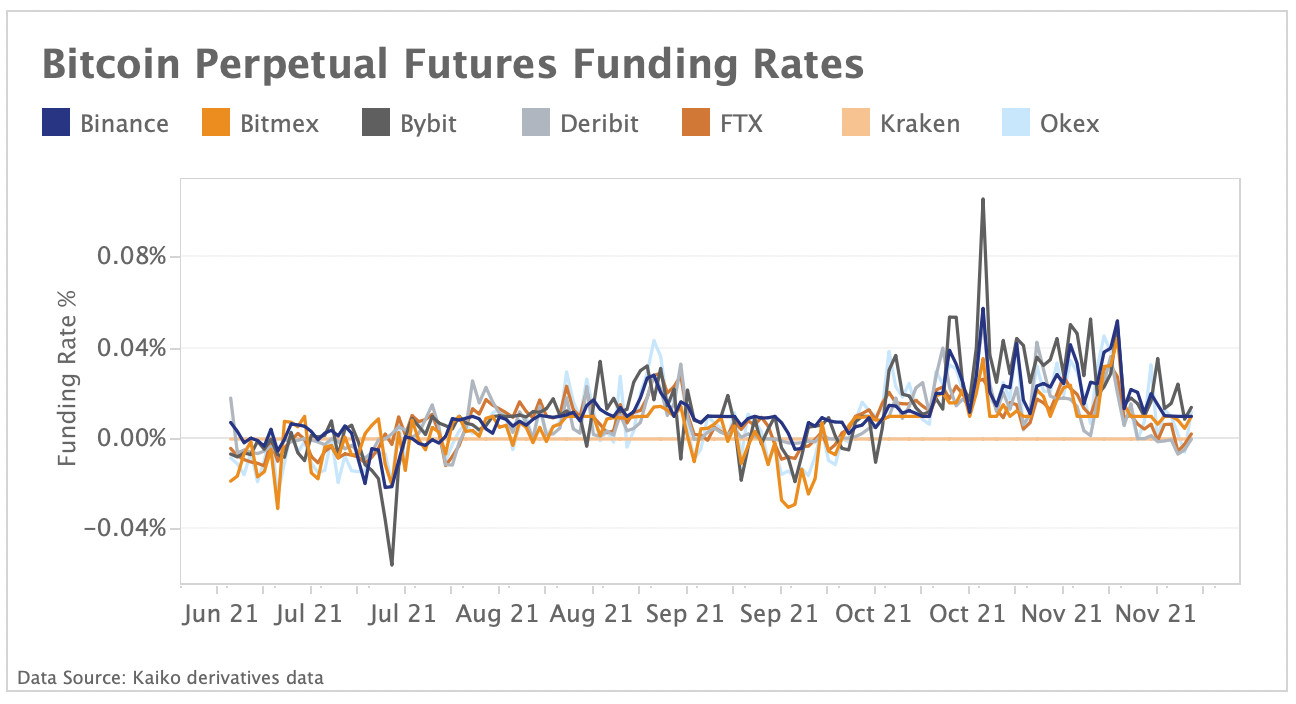 Bitcoin perpetual funding rates briefly turned negative last week before resetting to neutral territory as the market flushed out some leverage following Bitcoin’s bearish pullback from all time highs. Around $580mn in long liquidations were triggered as Bitcoin’s price dropped 11% since last Sunday. Perpetual futures funding rates, which represent the cost of holding long positions when positive, are seen as a gauge of market sentiment and leverage. Funding rates have recovered and are currently hovering in neutral territory on most exchanges, indicating bullish demand is muted.

Despite a reset in funding rates, open interest remains significantly higher than September lows. Below, we chart the percentage change in Bitcoin open interest since the start of September on seven exchanges. 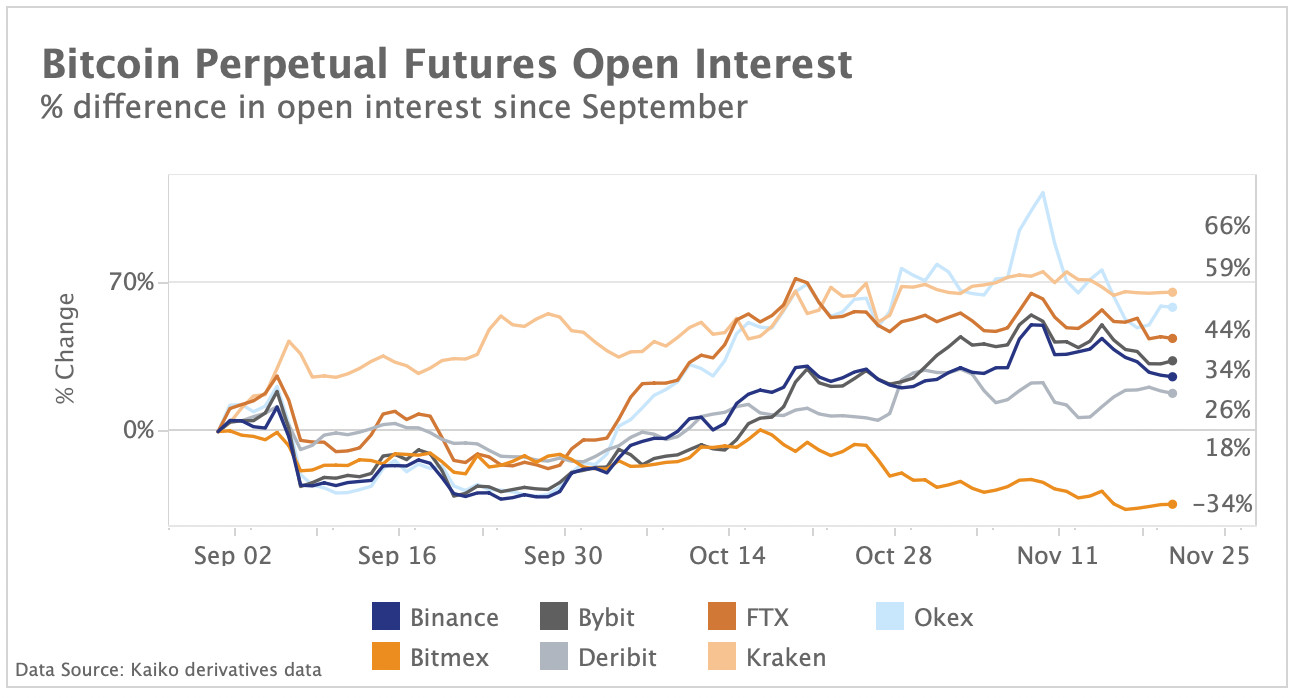 We observe that growth has been uneven especially among the smallest exchanges. Bitcoin open interest on the largest futures exchange Binance rose by 26% since the start of September. By contrast, open interest declined by over 34% on Bitmex.

Bitmex, which was the first to list perpetual futures back in 2016, currently accounts for only 4% of total perpetuals open interest. Over the past few months, Bitmex has come under increased regulatory pressure to limit access for U.S. customers as part of its settlement with the U.S. Commodities Futures Trading Commission (CFTC). 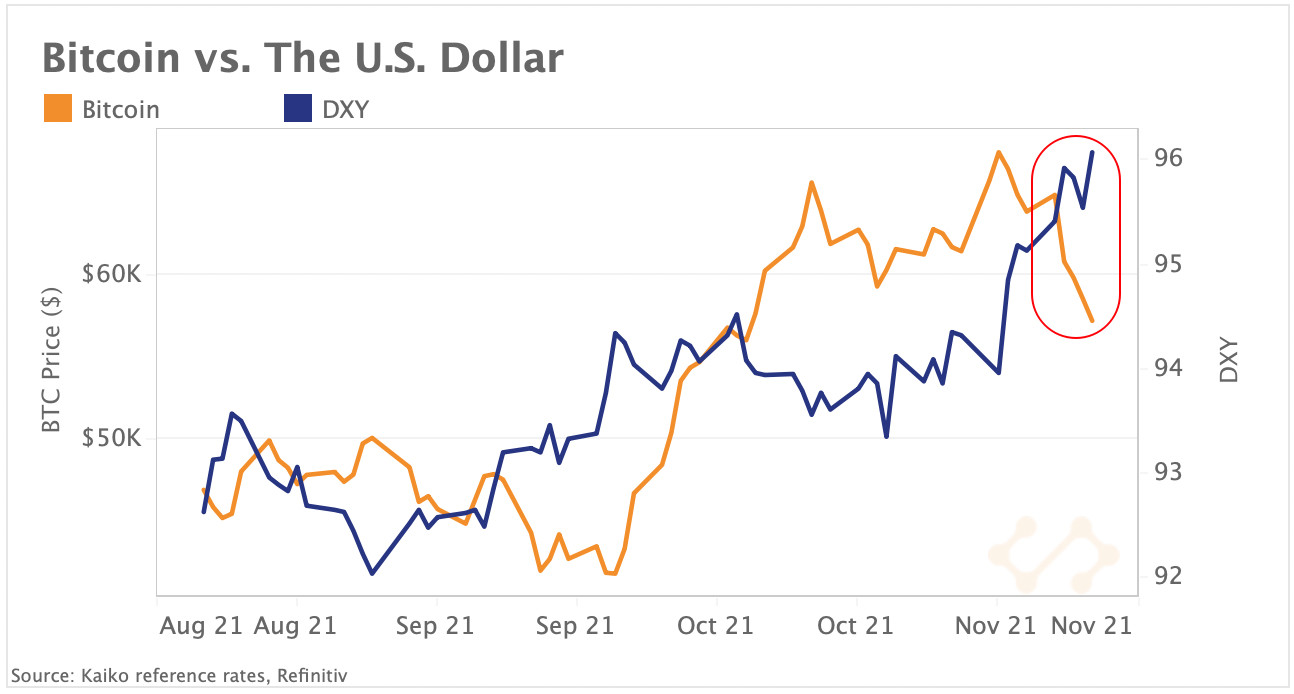 The U.S. Dollar hit a 16-month high last week as investors sought safe-havens on inflation worries and renewed lockdown fears in Europe. The Dollar index (DXY), which measures the performance of the greenback against a basket of competing currencies, strengthened to 96 last week, its highest level since July 2020.

Surging U.S. inflation and the prospect of a sooner than expected rate hike by the Fed has also helped the Dollar rally. This has put pressure on riskier assets such as crypto and emerging market currencies. Above, we chart Bitcoin and the DXY since September and can observe they have mostly moved in the opposite direction.

Emerging markets, which are already struggling with rising inflation, saw their currencies tumble last week as the dollar strengthened. The Turkish lira (TRY) hit record lows against the USD, falling by more than 11% over the past week. Below, we chart Bitcoin trade volumes executed against the TRY on all exchanges in Kaiko’s coverage along with the USD-TRY exchange rate. 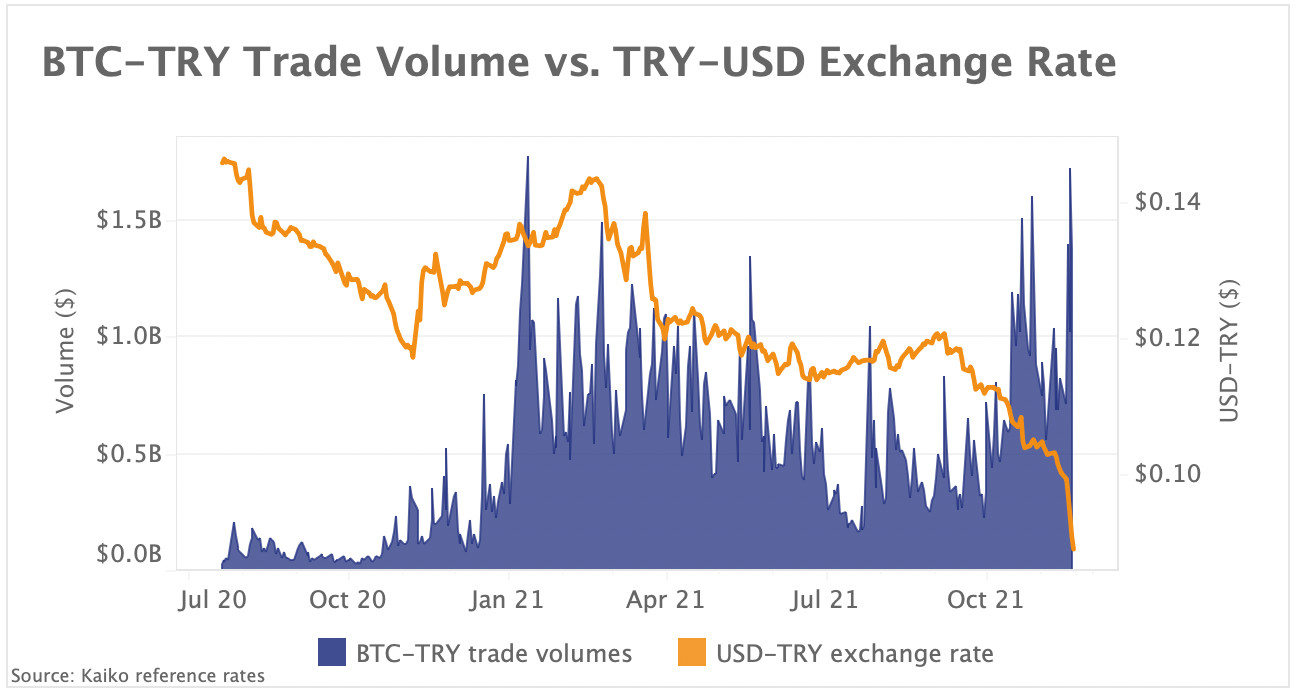 We observe that the lira devaluation since September (-35%) has been mirrored by a strong growth in BTC-TRY trade volumes. The increase in volumes comes even though Turkey banned the use of crypto for payments back in April.

Despite inflation nearing 20%, the Turkish central bank cut its policy rate by 100bsp, further contributing to the lira’s historic meltdown. This could favor crypto assets which are seen as a more stable investment alternative. According to on-chain data from Chainalysis, currency devaluation has been among the main drivers of cryptocurrency adoption in Turkey which accounts for a large percentage of crypto use in the Middle East.