Markets recovered slightly last week as investors scaled back their interest rate expectations after worsening business activity data in Europe and the U.S. suggested a forthcoming recession. U.S. equities ended the week in the green while Bitcoin staged a modest recovery, closing Sunday night above $21k. 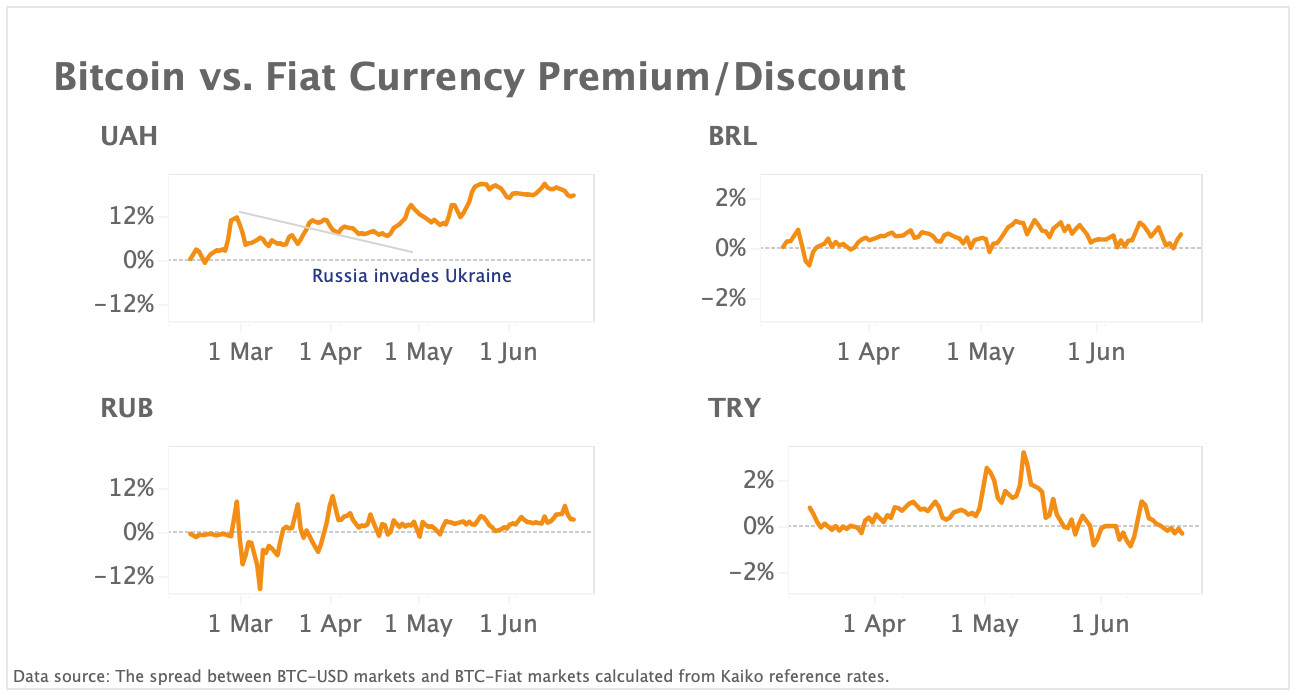 Bitcoin’s fiat premium/discount has been particularly volatile over the past few months on Ukrainian, Russian, Brazilian and Turkish markets as interest rate differentials and geopolitical tensions boost FX volatility between countries. Bitcoin’s premium or discount is calculated as the spread between the price of BTC in local currency converted to U.S. Dollars using the currency’s hourly exchange rate.

Since the start of the war in Ukraine, Bitcoin has been trading at an average premium of 13% on Ukrainian markets. Strict capital controls and financial sanctions additionally disrupted Russian and Ukrainian markets, limiting the ability of traders to arbitrage price dislocations. Ukrainian Hryvnia (UAH) trade volumes have also increased and are still well above their Q4 2021 average, which suggests that local demand remains robust. Bitcoin’s price on Russian markets versus USD markets has oscillated sharply between March and April as the Ruble lost over 70% of its value before regaining ground.

Double-digit inflation and the Turkish Lira’s (TRY) devaluation has underpinned crypto demand in Turkey. However, the recent brutal market downturn appears to have resulted in some selling pressure with Bitcoin’s premium on Turkish markets falling from 3% in May to a discount of 1% in June. By contrast, Bitcoin has been mostly trading at a premium on Brazilian markets. This could be explained by a higher share of institutional adoption as signalled by the launch of several crypto-linked exchange traded products on Brazil’s B3 exchange over the past year.

The two countries also differ significantly in their regulatory approach towards digital assets. While Turkey banned the use of crypto for payments last year, Brazil is currently considering recognizing crypto assets as a means of payment. 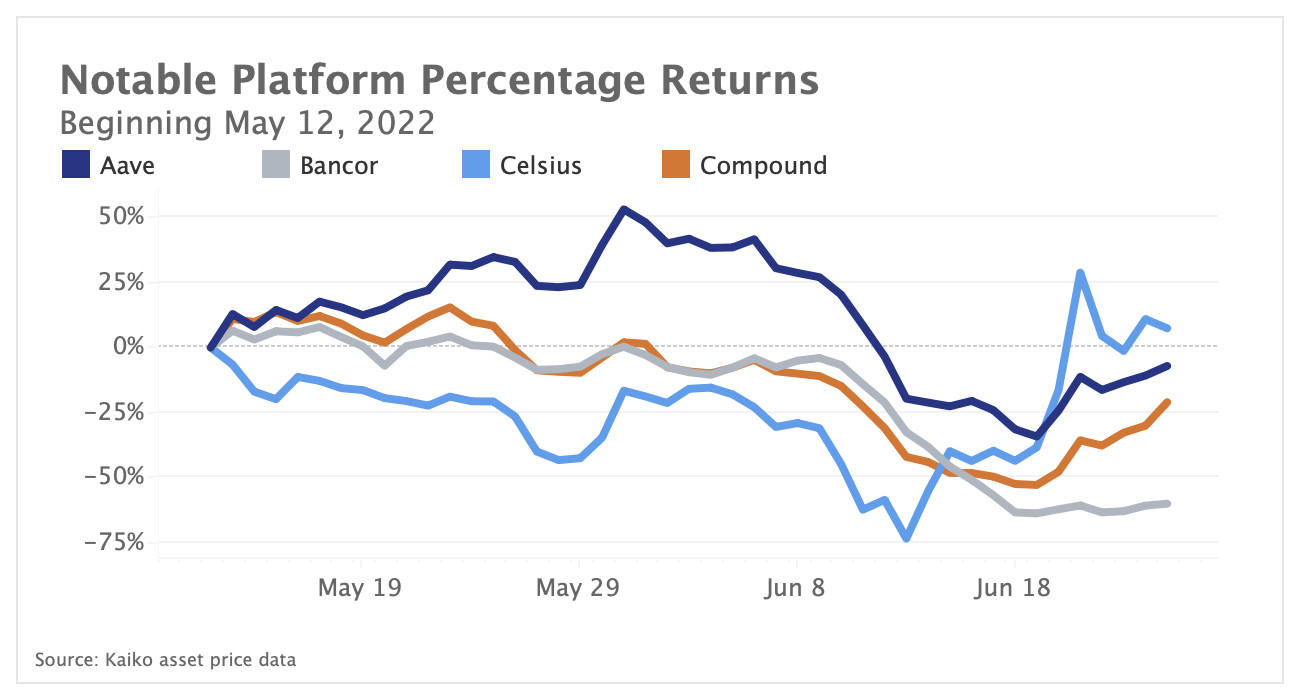 Despite Celsius verging on insolvency, the platform’s CEL token surged over 300% last week after a social media campaign #CELShortSqueeze picked up steam. Last week, the Celsius team said it was working to stabilize liquidity and operations and was engaging in conversations with regulators, though it did not provide a timeline. CEL remains slightly above its post-Luna crash level on May 12th.

Tokens for decentralized lending and exchange platforms and have also suffered amid extreme market conditions. On June 19, Bancor announced that it was suspending Impermanent Loss (IL) Protection due to “hostile market conditions”. IL Protection is its main differentiator in the DEX space and the token is down over 60% since May 12. Finally, Aave and Compound, two of the older DeFi lending/borrowing protocols, have continued to function normally and are 7% and 20% below their May 12 levels, respectively. 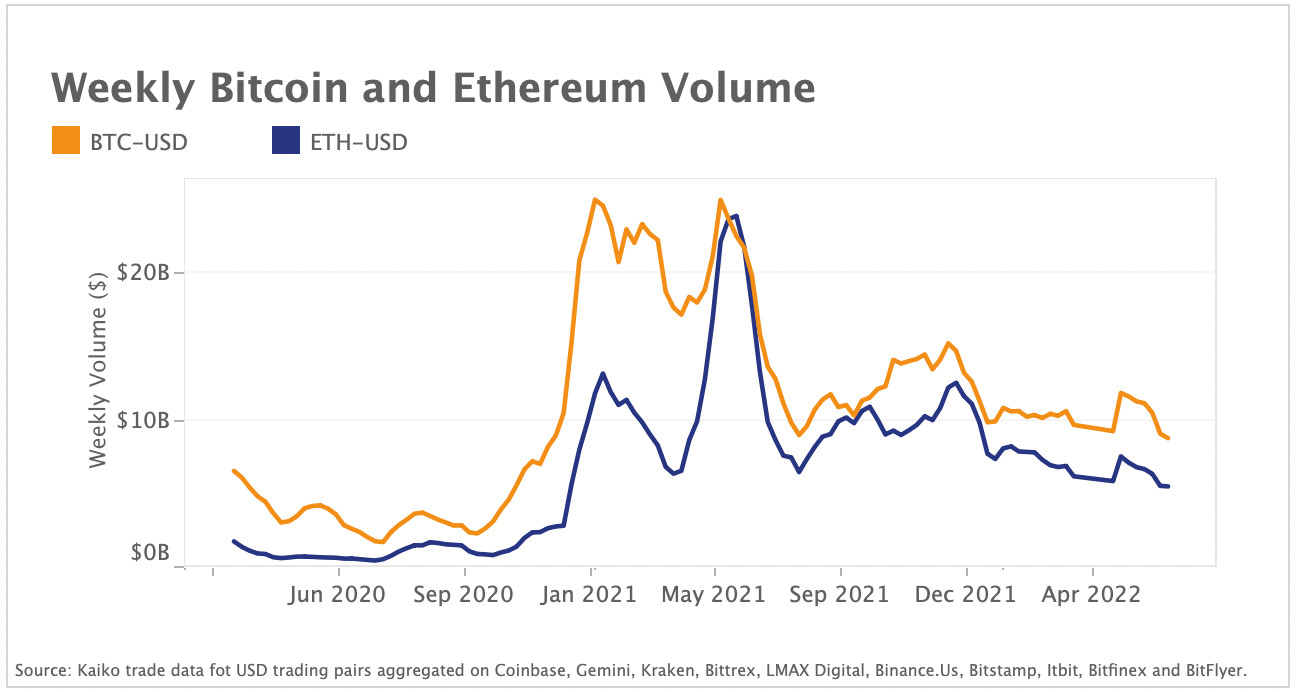 Bitcoin (BTC) and Ethereum (ETH) weekly trade volumes are down significantly since the start of the year and are currently sitting below their levels from early 2021. Ethereum’s trading activity declined faster YTD than Bitcoin’s. Overall, however, both assets saw a less extreme drop in trading volume relative to the sharp dip in the aftermath of the May 2021 sell-off, despite a similar decline in price. This suggests that the current downtrend is the result of measured de-risking of asset allocators rather than sudden deleveraging. During the summer months, trade volumes and liquidity will likely remain lower on average, as has historically been the case. 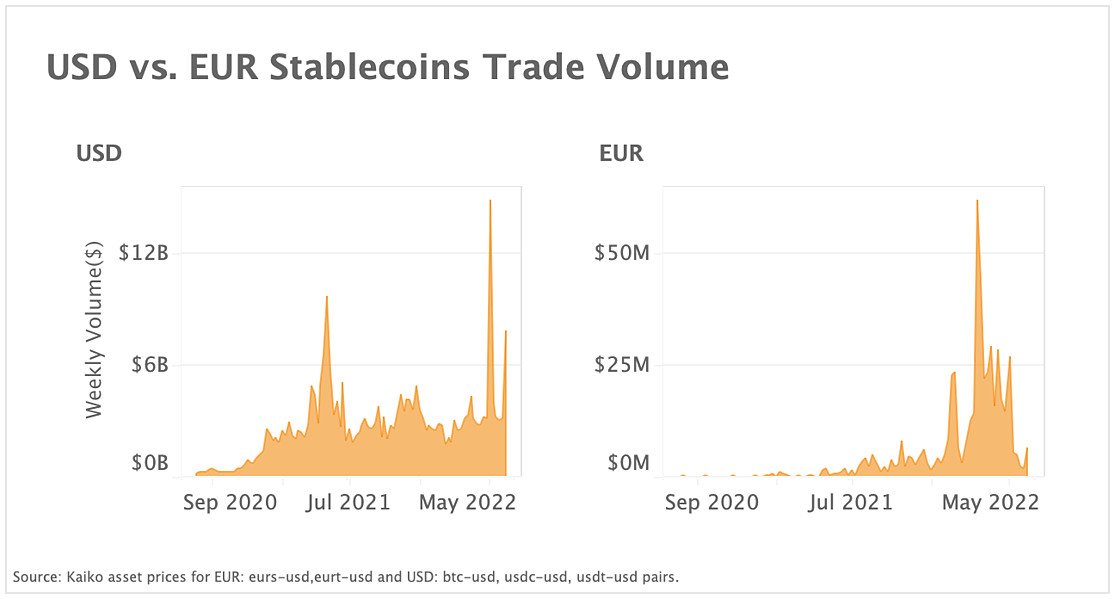 USD-backed stablecoins have dominated cryptocurrency market activity for years, with weekly trade volumes magnitudes higher than their euro-backed counterparts. USD stablecoin weekly volume averages between $4 billion and $6 billion, compared with just $25 million for Euro stablecoins. However, this may change as the European Central Bank (ECB) is preparing to end its multi-year regime of negative interest rates, which has penalized savers across the eurozone.

Just a week after the ECB explicitly said it is going to hike interest rates to fight the highest inflation since the creation of the euro currency, USD Coin’s (USDC) issuer Circle announced plans to launch a Euro-backed stablecoin. The new token will be available to investors at the end of June and comes as USDC is gaining momentum amid continued outflows from its main competitor and largest USD-backed stablecoin USDT. 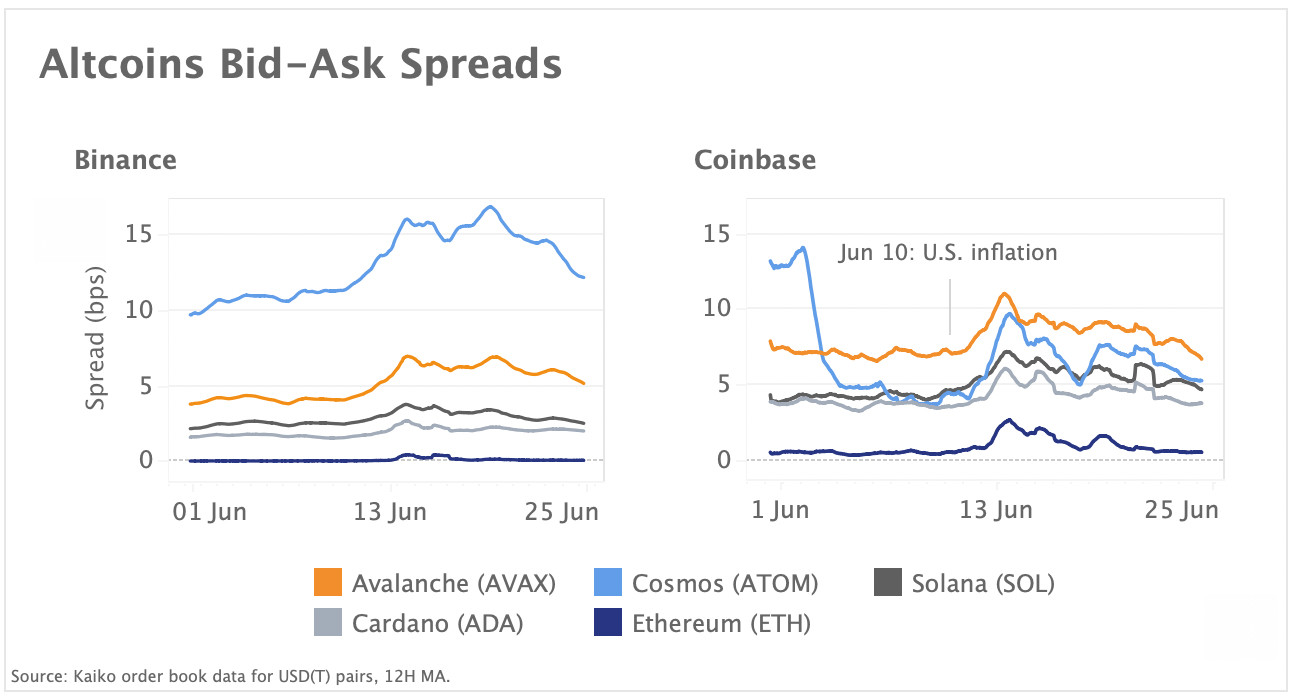 The bid-ask spread for some of the biggest altcoins increased in the second half of June and have remained volatile since as liquidity conditions deteriorate. Above we chart the bid-ask spreads for major altcoin pairs on Binance and Coinbase. We observe that spreads started increasing on June 10 after hotter than expected U.S. inflation data for May spurred a market-wide sell-off. DeFi platform Avalanche’s AVAX and layer 1 blockchain Cosmos’s token ATOM registered the strongest increase in spreads on both USD and USDT markets. Cardano’s ADA saw the smallest increase. Spreads were higher for USD pairs apart from ATOM which registers significantly higher spreads on Binance. Overall, altcoins’ spreads are higher and more volatile than ETH’s. 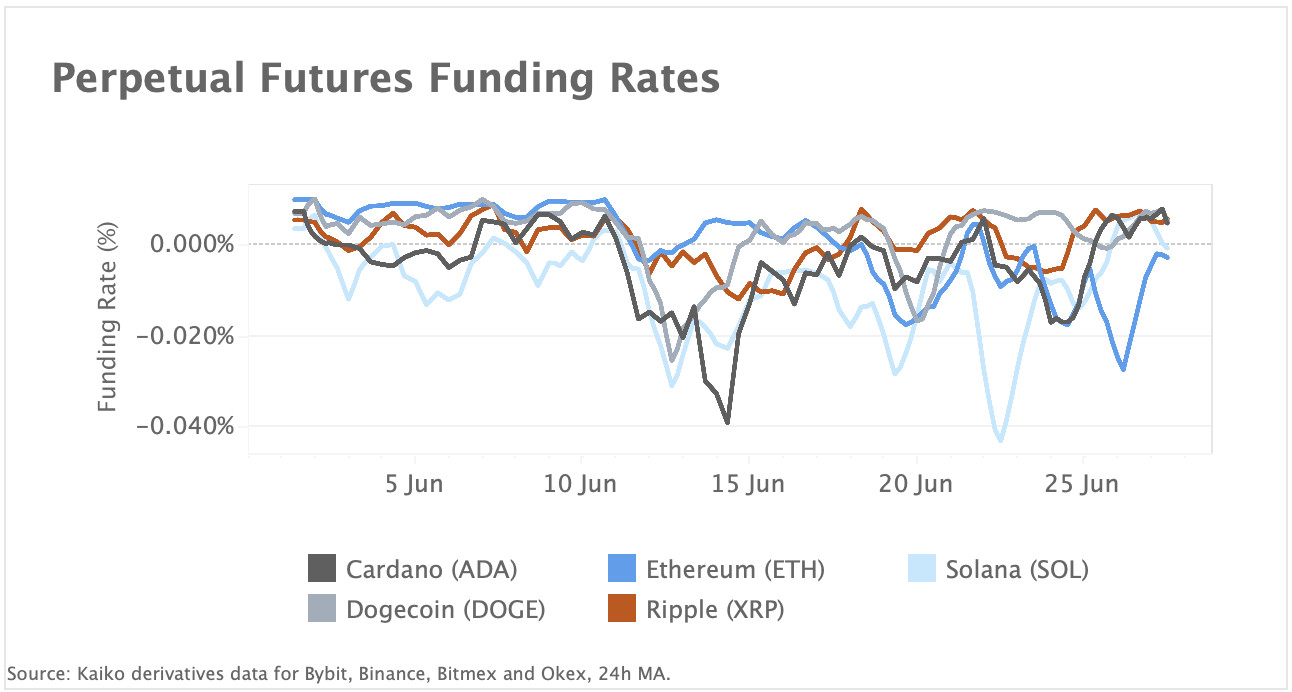 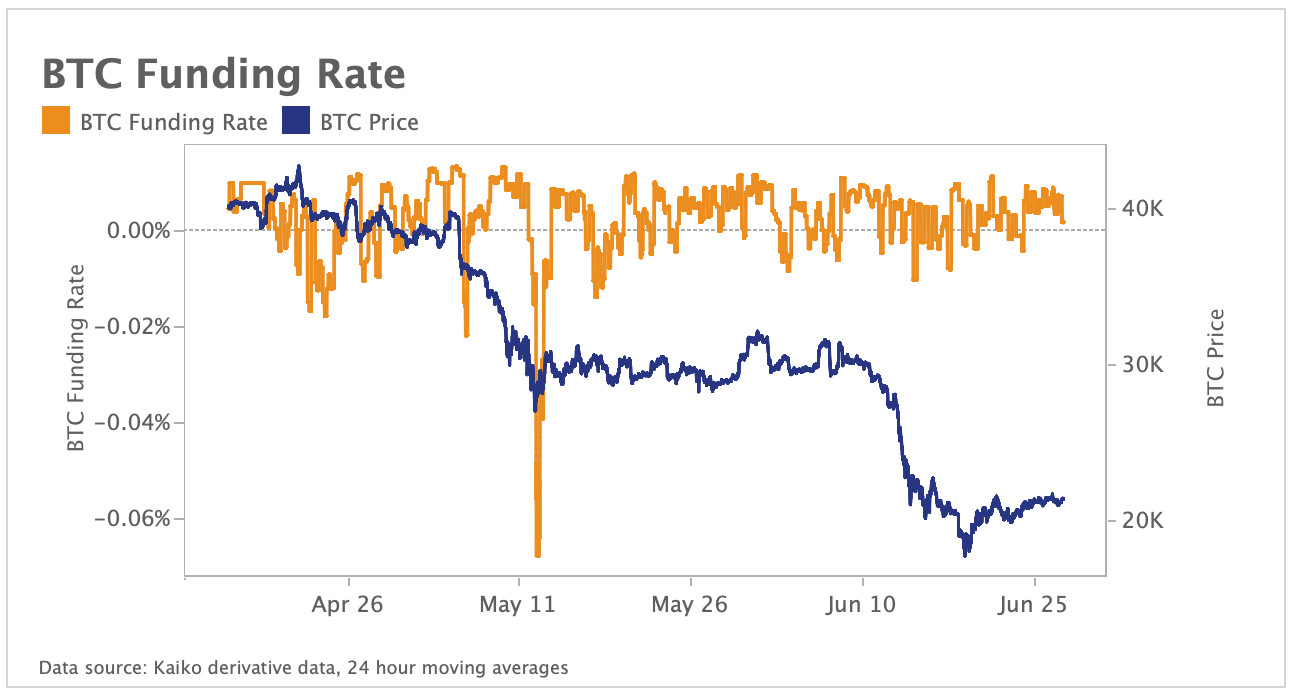 A look into the derivatives market for Bitcoin after the recent sell-off shows us that despite extremely bearish price action over the past few weeks, funding rates on BTC perpetual futures didn’t move far off their recent trend of slightly above neutral, around 0.005%. If the recent sell off was driven by futures markets we would likely have seen a sharper move negative in funding rates as was the case during the Terra collapse last month. The lack of a move negative in the funding rate for BTC perpetual futures leads us to believe this sell-off was spot driven as investors look to de-risk out of crypto’s flagship asset. 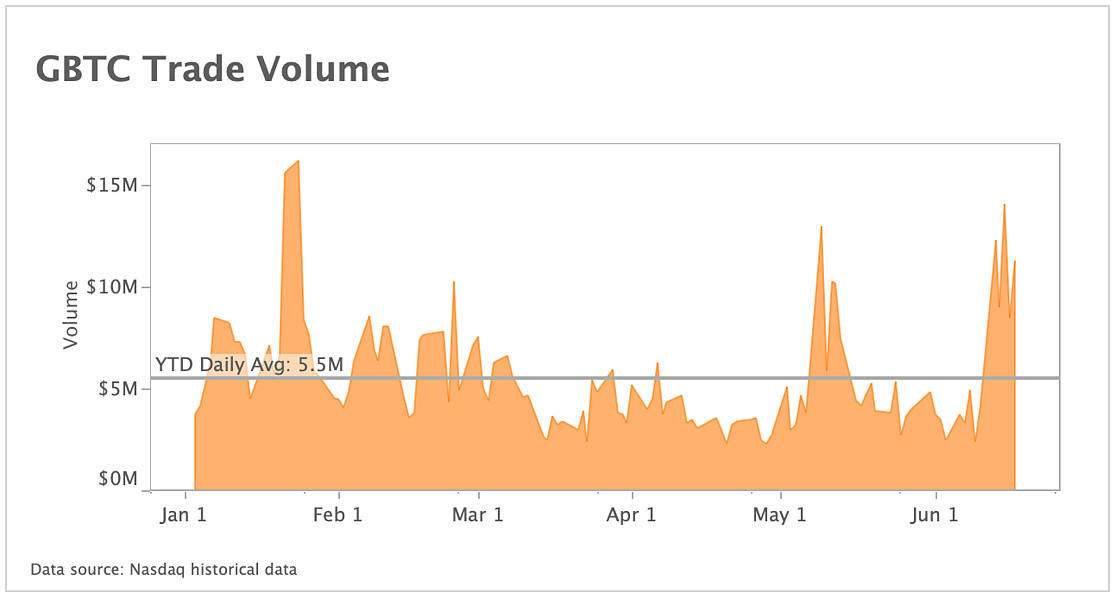 The Grayscale Bitcoin Trust, or GBTC, faces an important ruling from the SEC on July 6th that will determine whether or not the fund can convert to an ETF structure. GBTC is crypto’s largest fund, but has been trading at a discount to Bitcoin’s price since February 2021. The discount decreased slightly last week, moving from 34% to 29%, and a look at the volumes traded of GBTC offers an insight into the reason why. Volumes of GBTC traded hit their second highest levels this year as investors look to GBTC for a potential arbitrage trade ahead of the SEC ruling. If GBTC were to be converted to a spot ETF, and begin trading at par value, the current discount of about 30% could be captured as profit once the fund transitions to an ETF, and as a result we’ve seen GTBC volumes pick up significantly in the last week as the discount decreases. 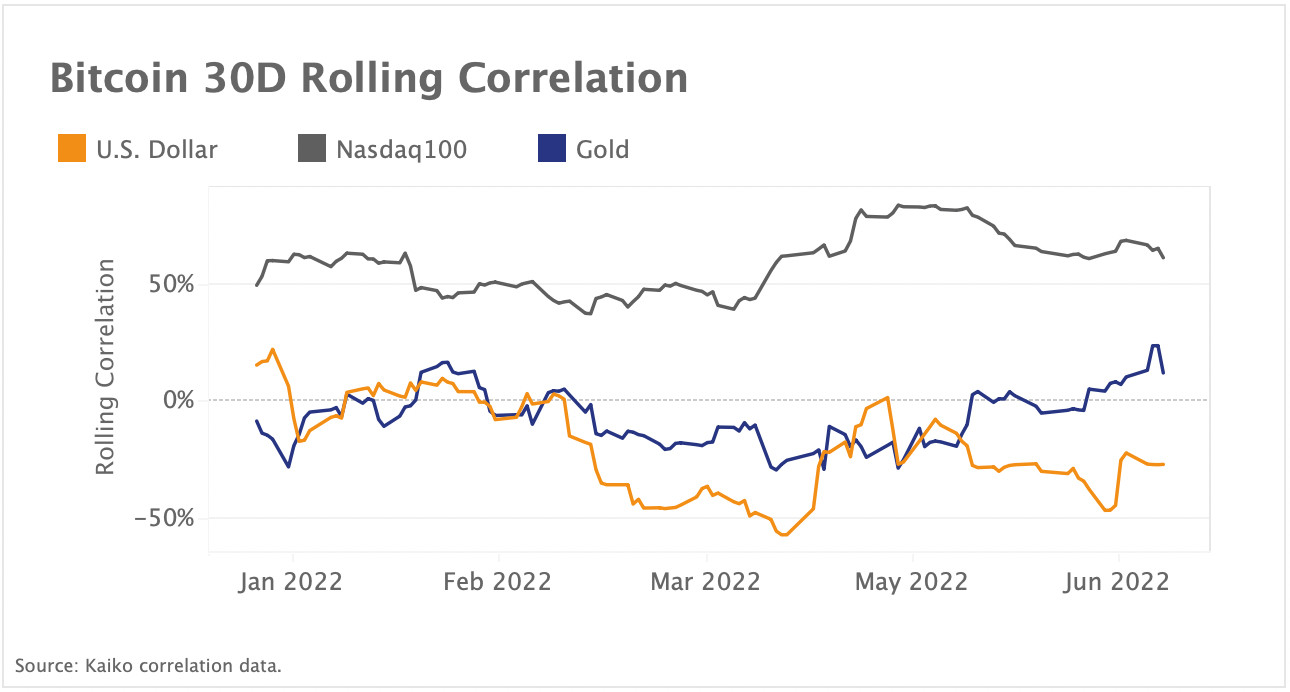 Despite remaining at historically high levels, Bitcoin’s correlation with the tech-focused Nasdaq 100 has declined in June after hitting a multi-year high of 0.8 in May. Risk sentiment recovered slightly last week as investors scaled back their interest rate hike expectations on mounting recession fears. However, while the Nasdaq closed the week up over 7%, BTC remained range-bound, stabilising around $21K. Bitcoin has been mostly uncorrelated with safe-haven gold while its correlation with the U.S. Dollar has oscillated between zero and negative 0.6 since the start of the year.