Bitcoin and the Grayscale unlockings

June’s market-wide correction has spread throughout all sectors of crypto, but on the horizon looms another potentially pivotal market event: The Grayscale “unlockings”. The Grayscale Bitcoin Trust is a closed-end fund that enables accredited investors to purchase shares of the trust at NAV. After a mandatory 6-month lock up period, shares are “unlocked”, giving investors the option to sell their holdings on secondary markets to retail traders. For much of the past year, secondary shares have traded at a steep premium to NAV, which created a popular carry trade in which investors would purchase shares and profit off of the premium 6 months later. This type of trade helped fuel Grayscale’s growth into the single largest holder of Bitcoin, with billions in AUM accounting for approximately 3% of total supply.

However, since February, the Grayscale premium – which at one point was greater than 40% – has transformed into a persistent discount. This bodes poorly for July’s “unlockings”, in which more than 140’000 BTC worth of shares will become available for liquidation. Many fear that falling crypto prices along with the discount could cause investors to flood secondary markets, which could place further downward pressure on Bitcoin spot markets.

Selling shares is very different from selling Bitcoin on spot markets, and the unlockings don’t necessarily mean Bitcoin will suffer. However, it is the uncertainty surrounding the event and the types of strategies GBTC traders have employed that is resulting in bearish speculation. For the past month, Bitcoin has failed to consistently trade above $40k and recently underwent a “death cross”. However, positive crypto developments continued this week with news that a16z launched a 2.2 billion USD crypto venture fund and CitiGroup’s digital asset unit is now live. 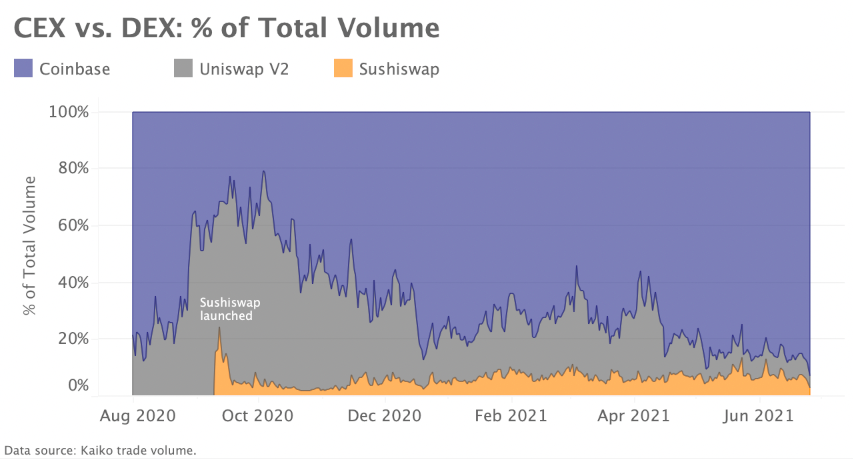 Above, we chart the % of total volume across Coinbase (CEX), Uniswap V2 (DEX), and Sushiswap (DEX). We can observe that from late August to November, Uniswap boasted more than 50% of market share compared with the other two exchanges. This was an impressive feat for an upstart exchange in an innovative space, but it ultimately didn’t last. Today, DEX volumes are but a fraction of CEX’s.

While DEX market share has fallen, DEX trade volume has undergone an overall increase since last summer. Uniswap V2 volume peaked at nearly $2.7 billion in late January, while Sushiswap volume peaked just last month. However, trade count, or the total daily number of executed transactions, tells another story about the adoption of DEXs. 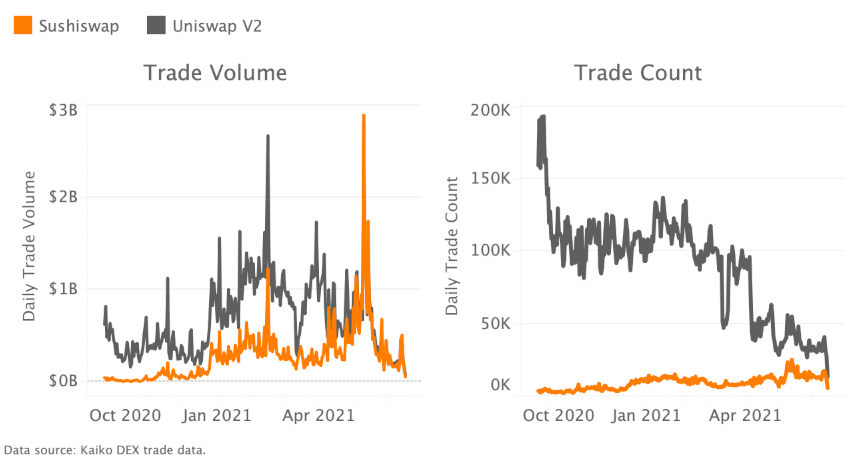 Generally, trade count gives a better idea of the total usage of an exchange. We can observe that as trade volume surged on Uniswap, total trade count stayed stable and then fell starting in March. Daily trades went from ~100’000/day from October to January to less than 50’000 daily. For scale, Coinbase processes on average 2-3 million trades every day.

This is quite a strange trend considering that trade volume and trade count are typically very closely correlated. The only way a divergence in these two measures can occur is if the average trade size grew. Below, we chart average trade size for the highest volume pair on Coinbase, Sushiswap and Uniswap V2. 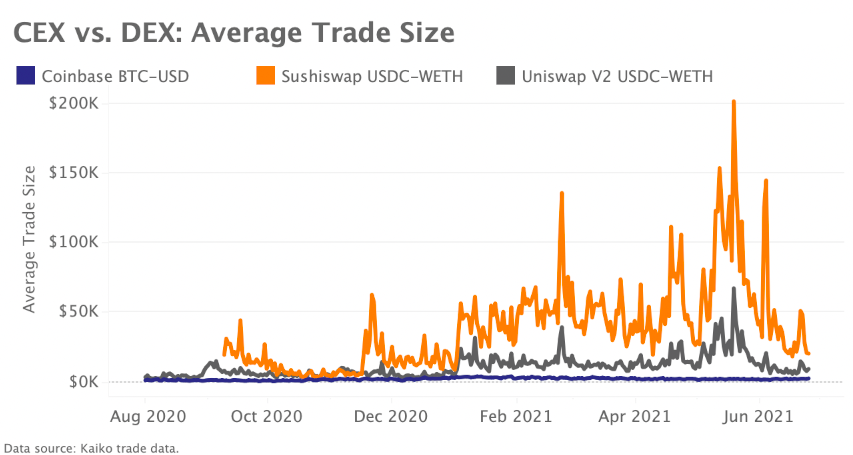 Average trade size on DEXs has soared, which explains why overall volumes grew despite trade count falling. On Coinbase, the average trade size for BTC-USD is just 3’000 USD / trade. On Sushiswap, average trade size peaked at more than 200’000 USD for the USDC-WETH pair. This is massive, and suggests that only high volume traders are using DEXs right now. It is clear that DEXs still have a long way to go before picking up significant market share. Once we see a rise in total daily number of transactions, this would suggest growing usage. Right now, trade volume appears to not be the best indicator for DEX growth. 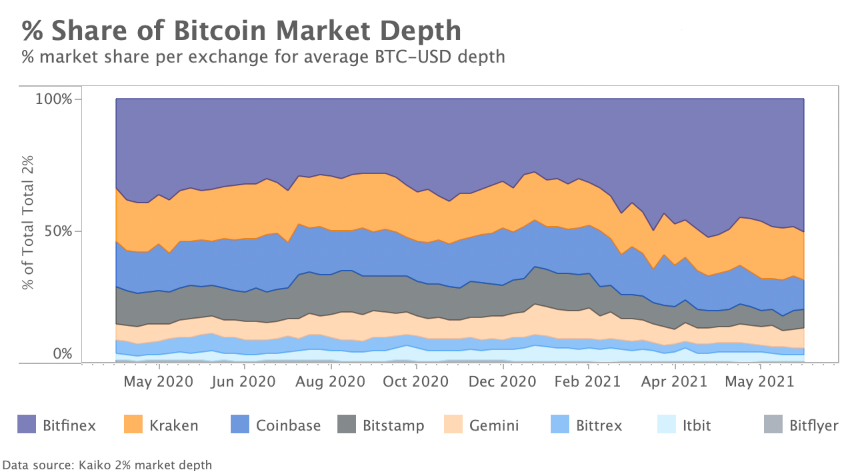 Market depth measures the total quantity of Bitcoin on an order book. Above, we chart average market depth within 2% of the mid price for BTC-USD on eight exchanges. We can observe that Bitfinex has gained market share since last year, and now accounts for more than 50% of USD spot market liquidity. Kraken accounts for 18% and Coinbase 11%. Over time, we can observe that Bitstamp has lost market share and now accounts for around 6% of spot market liquidity. Typically, the deeper a pair’s order book, the easier it is to place large market orders without significantly moving the price the asset. Exchanges incentivize market makers to supply liquidity to order books, which overall improves market efficiency.

China’s sudden crackdown on miners has created one of the largest migrations of Bitcoin computing power in the network’s history. Bitcoin mining is big business and for years the majority of all hash power has been concentrated in China. However, over the past year, other regions of the world have stepped up; in particular, North American miners are increasingly grabbing market share. A handful of blockchain mining companies are listed publicly on Nasdaq, the Toronto Stock Exchange, and London Stock Exchange, and above we chart their share price compared with Bitcoin.

We can observe that the two are closely correlated: as Bitcoin goes up, so do blockchain miner share prices. Since March of 2021, mining companies have suffered along with Bitcoin’s price, which stands in contrast to the record-breaking gains of the S&P 500. China’s recent clampdown could be seen as a good omen for these mining companies, though, which could translate to their share prices in the long run.