The permanency of inflation has been the biggest contributor to Bitcoin’s highs this month. This is not a coincidence that outflows from gold ETFs mainly in North America and Europe accelerated this past month, relatively validating the case for Bitcoin as an emerging but not yet established store of value in the long run. 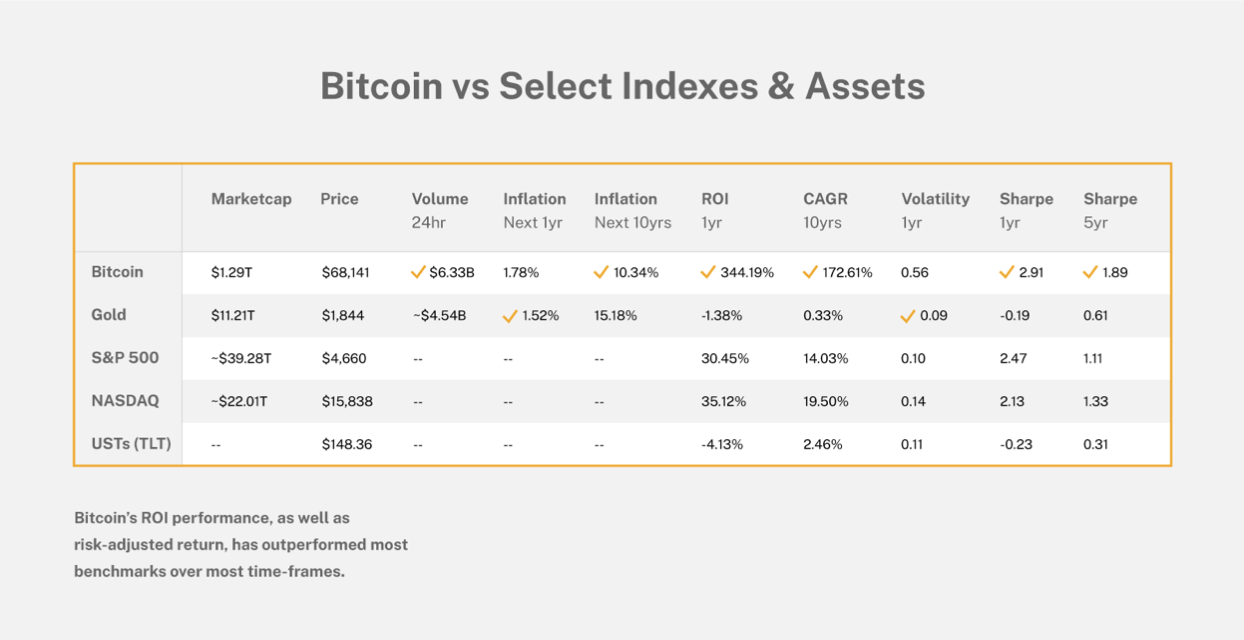 October was also a memorable month for Meme Coins, like Shiba Coin that reached a market value of $12 billion, gaining about 350% in a month which is equivalent to Bitcoin’s performance in the past 12 months. NFTs are still enjoying the hype with Coinbase and Facebook announcing their marketplaces that would allow users to trade and collect unique digital art. More on that in this report, with our expectations for what’s to come in the world of DAOs and Layer 2s.

As fun as they can be, the dip “meme coins” often takes is not exactly the life of the party. We’ve seen this happen just a few days prior to the writing of this report with SQUID, a token inspired by Netflix’s latest hit. Less than a week after its ICO, SQUID completely collapsed after a 230,000% uptick. Spectators were quick to spot the red flags of a scam in a crypto disguise; flashy name, an anonymous team and a domain name that was registered on October 12. Studies suggest that 80% of ICOs are scams, but we can let this overshadow the successful 20%; we’ve seen meme coins like the Shiba Token (ticker: SHIB) exceed the market’s expectations. By around mid-October, charts showed SHIB outperforming BTC by 123% – but there’s a reason for this surge. SHIB is an embryonic experiment that is evolving with a supportive and growing community now composed of over 700K holders of the token. The surge in value was on the back of an NFT avatar drop called Shiboshis, available on ShibaSwap, the in-house decentralized exchange of the project. The token required to obtain those avatars is the sister token of SHIB – called LEASH; a token granting access to exclusive NFT launches.

The facts are, just like actual memes, Meme coins will not cease to exist, the scams and the legitimate alike. At 21Shares, we’re firm believers in innovation, which fundamentally means we are not against the possibility that open-source Meme coins could evolve into relevant and creative ecosystems, but only time will tell.

The excitement around the Polkadot network had reached its highest levels in years above the $50 mark. The network has achieved a major milestone with parachain slots auctions to go live on the 11th of November. The auction refers to a process of allowing developers to list their intended projects on the Polkadot platform, by simultaneously acquiring crowd loan funding in DOT to bootstrap developments from the community. The ones securing a spot end up tethering to Polkadot’s relay chain, and consequently enjoy the blockchain’s interoperability and shared-security features. This allows for intercommunication and transferability of all different types of assets between the inter-connected blockchains and smart contracts platforms.

The latest technical steps required for the auctions to be fully brought online have been met as Polkadot’s codebase had been fully audited, as well as the culmination of the parachain disputes process. Worth noting that the network has allocated $770M for its treasury to be used as a development fund for the upcoming slot auctions. In addition, according to the recently ratified referendum #39, 11 auctions will be deployed and spread out into two batches starting firstly on November 11th and ending on December 15th, whereas the second gets underway on December 23rd and concludes on March 9th, 2022. As noticed, the inceptive bidding interval should last for 2 days, tailed by an ending period of 5 days – 7 days in total. In other words, the proposed schedule should span over 5 weeks with a rate of a project per 7 days.

Predicting who’ll secure Polkadot’s parachain slots requires looking no further than the protocols who successfully bid and won the slot auctions on Kusama. These include but are not limited to Acala Network (Cross-chain DeFi network and liquidity hub), Moonbeam (EVM-compatible smart contract platform), Manta Network (Interoperable privacy layer project), Centrifuge (Tokenizing platform). As of writing, the Acala Network is likely to be the first winning parachain. The network received over 8 million DOT equivalent to $422 million from 50,000 contributors.

A Metaverse of NFTs

On October 12, one of the world’s leading crypto exchanges Coinbase announced tapping into the NFT vertical by opening a waitlist where users can both mint, collect and trade NFTs. Where this might be uncomfortable news for marketplaces like OpenSea, it’s great news for digital artists and creators who’ve seen their incomes take a dip due to unemployment, inflation and pandemic aftermaths. A US survey carried out by Americans for the Arts in 2020 found that 95% of its 15,700 correspondents reported income loss, 80% of which had no post-pandemic recovery plans. One year following this report, the third quarter of 2021 saw NFT sales skyrocket to $10.7 billion, which is up more than eightfold from the previous quarter. While this might not include those severely hit by the pandemic, it sure means there’s still hope. Embarking on NFTs as a digital artist could be a highly influential addition to a post-pandemic recovery plan.

Towards the end of the month, Facebook, Inc. rebranded to Meta, short for the metaverse, in which it will merge many next-gen industries like support the trading of NFTs on its platforms for instance. Imagine shopping for NFTs on Instagram. Critics interpreted the move as a hedge against the leaked documents describing algorithm discrimination and oppression. We, at 21Shares, believe Facebook’s announcement is nevertheless an essential promotion for the crypto industry’s virtual and augmented reality sector. Regardless of Facebook’s intentions, we view it as a victory for the crypto ecosystem since the tainted image of the social media giant is amongst the main reasons decentralized applications exist to dismantle the power a corporation like Facebook exerts over users.

We could anticipate both, applications and the metaverse sector, to keep up with this rate of adoption and awareness as distrust grows against Facebook, or Meta. The bull case scenario for Meta is that by owning Oculus, it might become the largest beneficiary of the adoption of the Metaverse sector as users will likely be using more immersion VR goggles significantly in the future.

Meta could win the VR/AR hardware race but not necessarily succeed in the application/software category. While its virtual space will be available to billions, due to distrust placed in Meta, users will most likely divert to crypto-native applications like Sandbox and Decentraland. So, either Meta will make those crypto virtual spaces available on Oculus alongside its in-house application or take the opposite direction.

Forks of OHM: the rise of asset-backed cryptocurrencies

The meteoric rise of Olympus DAO over the first half of 2021 began signalling a wider narrative shift towards what is slowly becoming recognized as DeFi 2.0. A movement defined by new protocols that build modularly on the foundational blocks of the industry’s blue chips like MakerDao, Compound and Yearn Finance, but also aims to address some of the tender spots that impeded the first iteration of DeFi projects from reaching its full potential.

Amongst some of the underlying pain points is capital inefficiency, exemplified in the unsustainable model of liquidity mining that encourages mercenary behaviour rather than fostering sustainable liquidity provision over longer time horizons. This acquisitive approach correspondingly produced a socioeconomic class of market makers unmoved by fundamentals and only concerned with lucrative APYs, which by virtue gave rise to an unhealthy cash flow across the space. And that is what Olympus Dao and its assemblage of inspired forks hope to address.

In essence, Olympus is a decentralized autonomous organization (DAO) responsible for the management and issuance of an algorithmic, fully-backed and free-floating decentralized reserve currency. Contrasting conventional stablecoins like USDC or USDT that are pegged to the US dollar and who are backed or partially-backed with cash reserves, OHM is fully collateralized with a treasury of assets that reside under the authority of the Olympus organisation to manifest what is known as a Protocol-Controlled-Value. By design, every OHM issued has to be backed by $1 worth of collateral from a specified list of assets that commenced with DAI and has now expanded to FRAX, OHM-FRAX LP tokens from Uniswap, OHM-DAi LP tokens from Sushiswap.

Furthermore, it’s an algorithmic currency rooted in the (3,3) game theory principles where a positive-sum game environment based on cooperation is created that support the protocol to utilise its treasury to the mint at a discounted price and burn the token’s circulating supply. Similar to creations and redemptions of ETFs shares, each OHM was originally backed by 1 DAI for new units to enter circulation – but increased on par with the token’s price appreciation to a fair floor price – meaning that it shouldn’t trade below the intrinsic value illustrative of the treasury backing the currency. Finally, OHM has a risk-free value that is dictated by the worth of the assets backing each token and is determined by the dynamics of the free market. 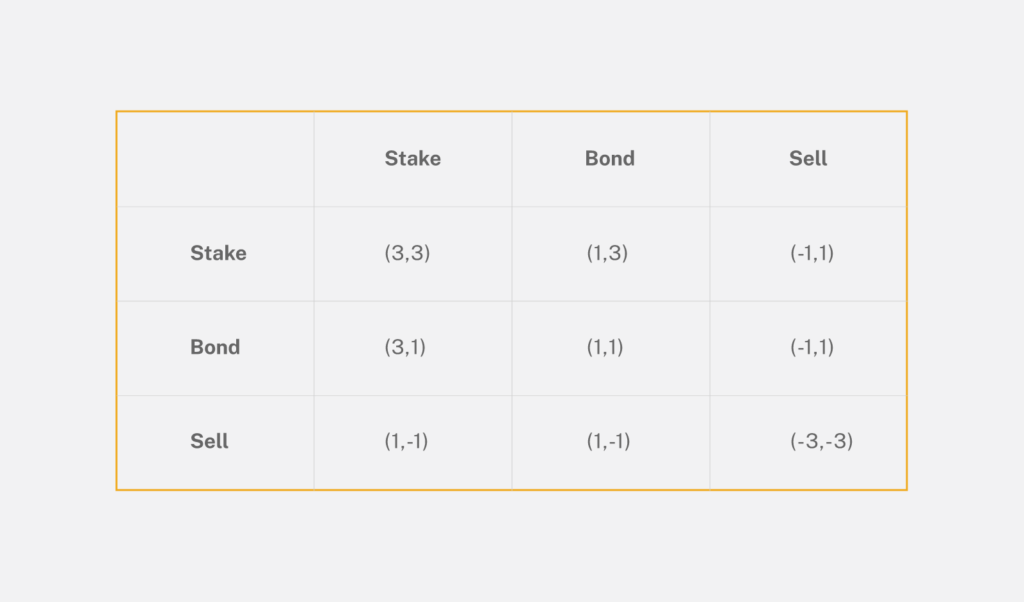 OHM’s unique monetary policy tools personified in staking and bonding is what helped the DAO introduce its pivotal protocol-controlled liquidity model, which flipped the liquidity-mining archetype on its head. Rather than renting out working capital from users by offering liquidity mining, Olympus rather now owns the liquidity themselves by allowing the purchase of crypto assets from users in exchange for discounted OHMs. This way the protocol would avoid renting out liquidity providers for their short-sighted capital, and instead capitalize on the bonding mechanism to retain possession of the liquidity needed to bootstrap the project over a longer period. The benefits don’t stop there as owning a liquidity receipt or LP token means that the protocol is susceptible to earning further yield on what would be idle assets. Given the triumphant success of OHM so far, a slew of forks appeared throughout October that hopes to mirror their innovative system design.