Interest in smaller coins has gone up

Bitcoin has made a strong move over the last two weeks, but was yet again not able to break through the 10,000 resistance level. We saw another impressive trading range of 1,400 points: between 8,600 and 10,000.

In general, confidence has returned to the financial markets as countries around the world are easing lockdowns, allowing economies to restart their engines again. The ongoing financial stimulus packages are also definitively having a positive effect on the global economy and financial markets.

Noteworthy in the crypto market is the broad interest coming from the traditional world, as Goldman Sachs invited clients to a hosted call about bitcoin, gold, and inflation. This must mean that there is increasing client demand for bitcoin. Unfortunately, the outcome of the call was not a huge success.

Turning now to CBDCs: Banque de France announced that their digital euro test was a success. China is also slowly piloting to start replacing the physical legal tender with the Chinese digital yuan. Many factors may play a role as China speeds up this project. On the one hand, there is the accusation of them being to blame for the coronavirus, and there is also their deep mistrust of the U.S. On the other hand, there is Facebook’s Libra project, which was recently amended, and the pressure from the EU to introduce a CBDC in the near future.

Within the crypto community another merger and acquisition was announced by Coinbase: they are acquiring the leading institutional crypto brokerage, Tagomi, for USD 80 million.
In the charts below, you can see the technical analysis for the Alt/Mid/Shit Indices. Attached you will also find our short-term view on support and resistance levels for all three indices: 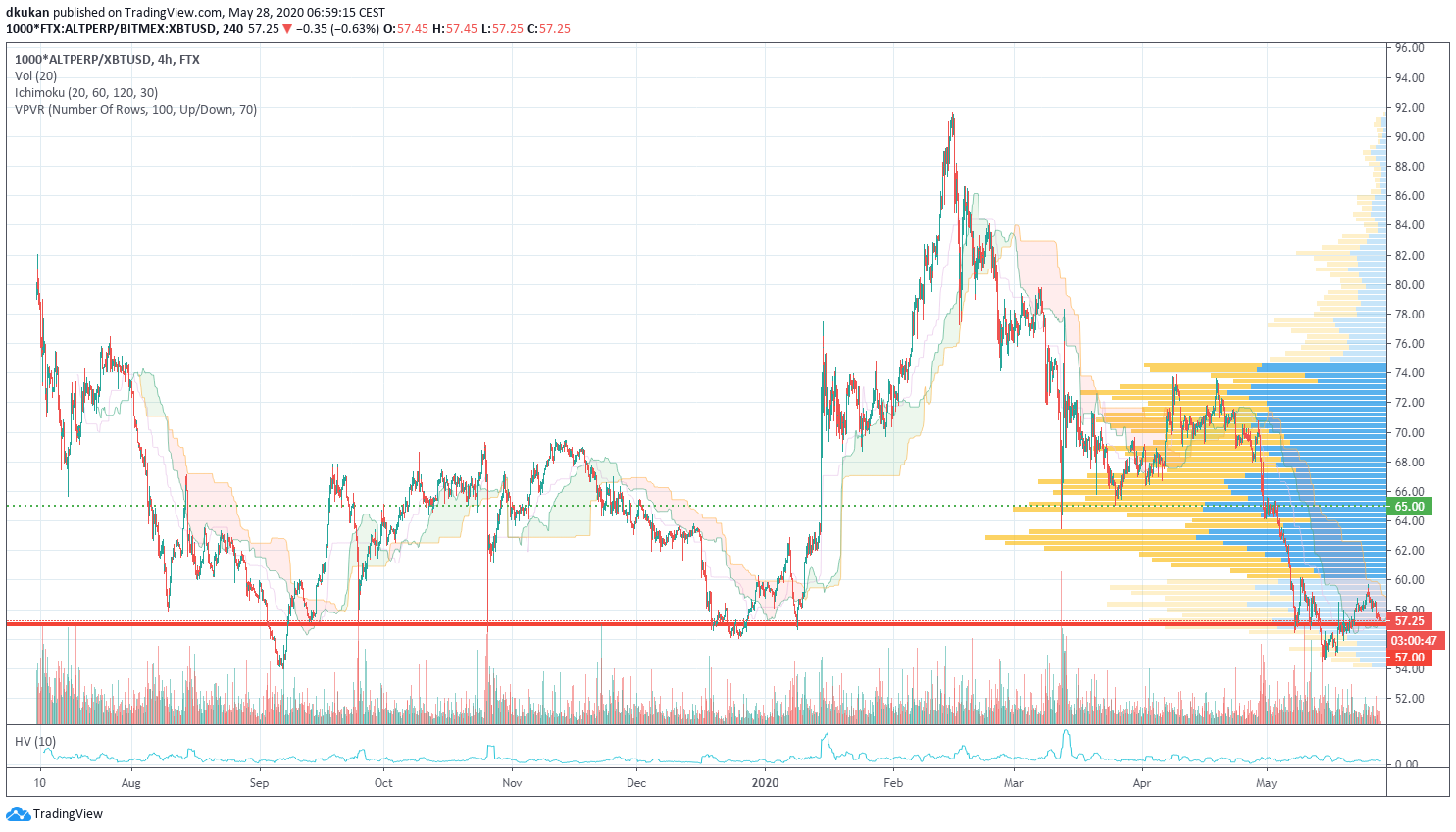 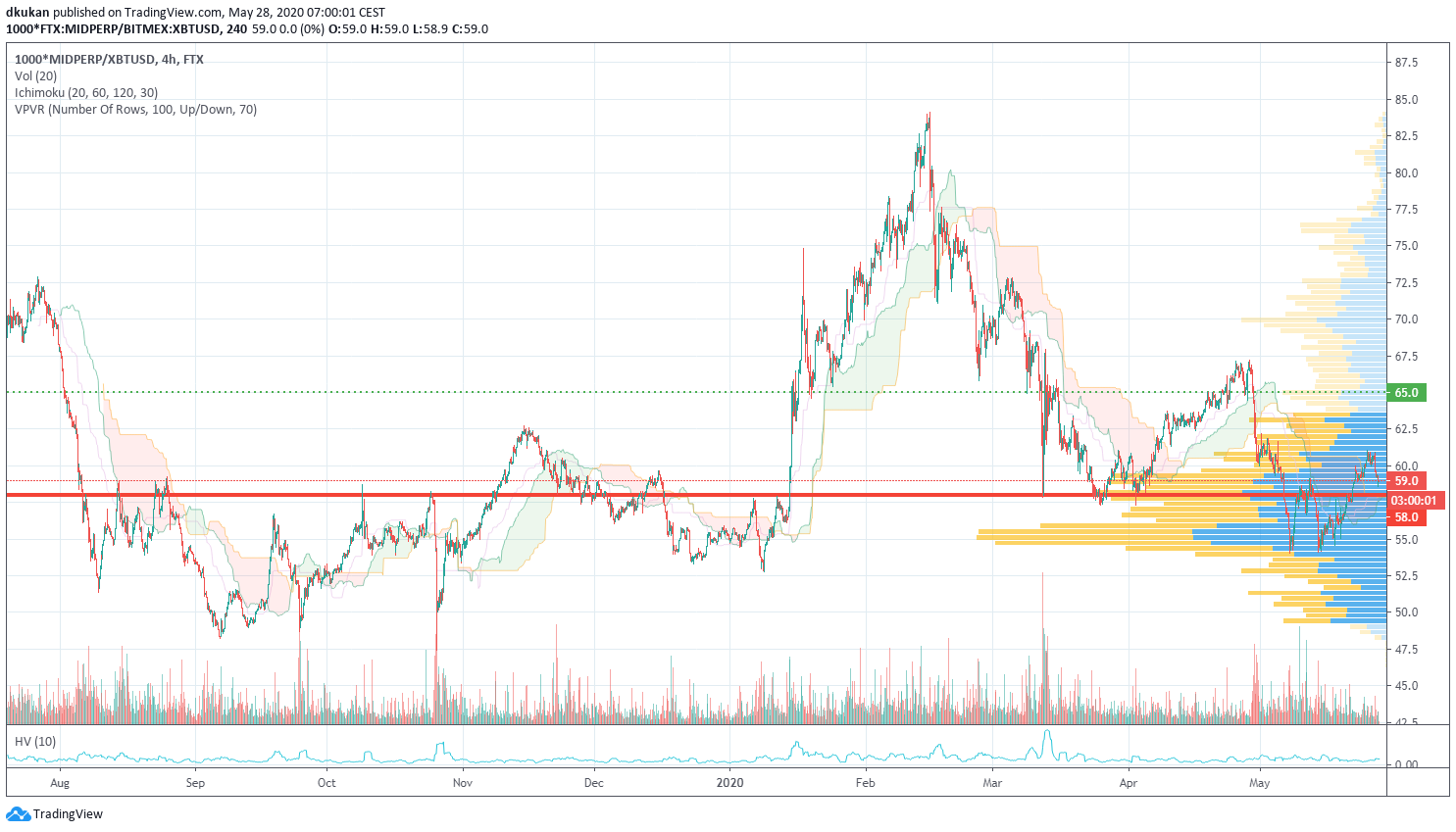 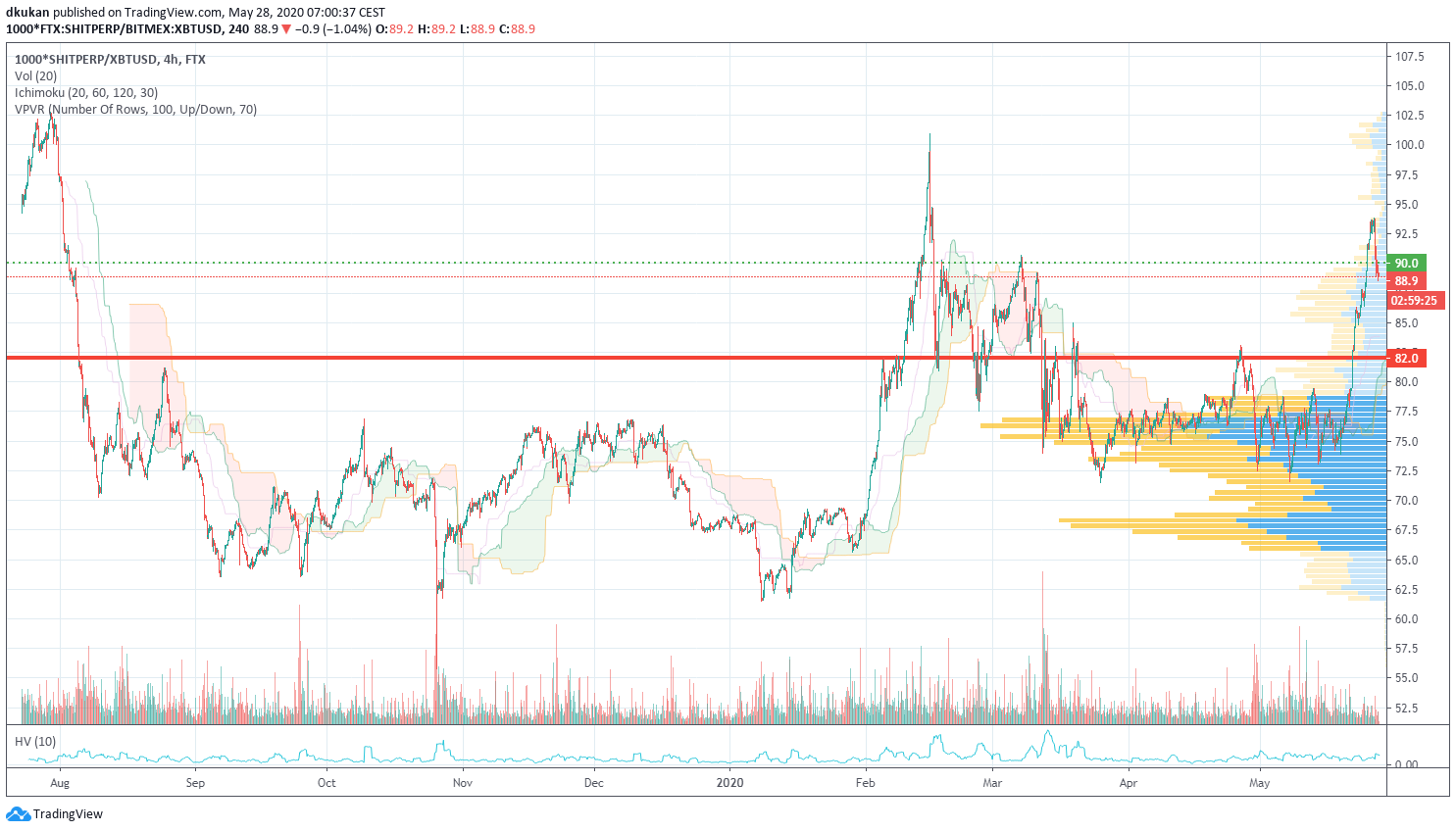 The rotation we have been talking about over the last few weeks finally took place, mainly in the Shit Index, which is performing approximately 20\% better than BTC. The Alt Index and Mid Index recovered slightly from the lows, but the Shit Index broke through all resistances on the way up, almost reaching the highs of Q1 2020. The index is currently trading roughly 10% lower than the all-time high since its inception in 2019. We have therefore revised the support and resistance levels accordingly.

The outperforming sectors relative to the Index is yet again Entertainment, followed by Interoperability. The losing sectors are Exchange, Privacy, and SoV.

The best performing coin from the Entertainment sector is THETA with a plus of 112%. OMG coin from the Shit Index performed plus 102%. Additionally, GRIN and ATOM are worth mentioning, with 55%. Only a few coins performed negatively: DGB at minus 19% and SNT at minus 14%.

Ethereum Classic will become fully compatible with Ethereum after the upcoming Hard Fork Phoenix, which has been scheduled to happen in about four days. The June upgrade will further enhance the interoperability between these two networks.

We expect continued ongoing rotation over the next few days. 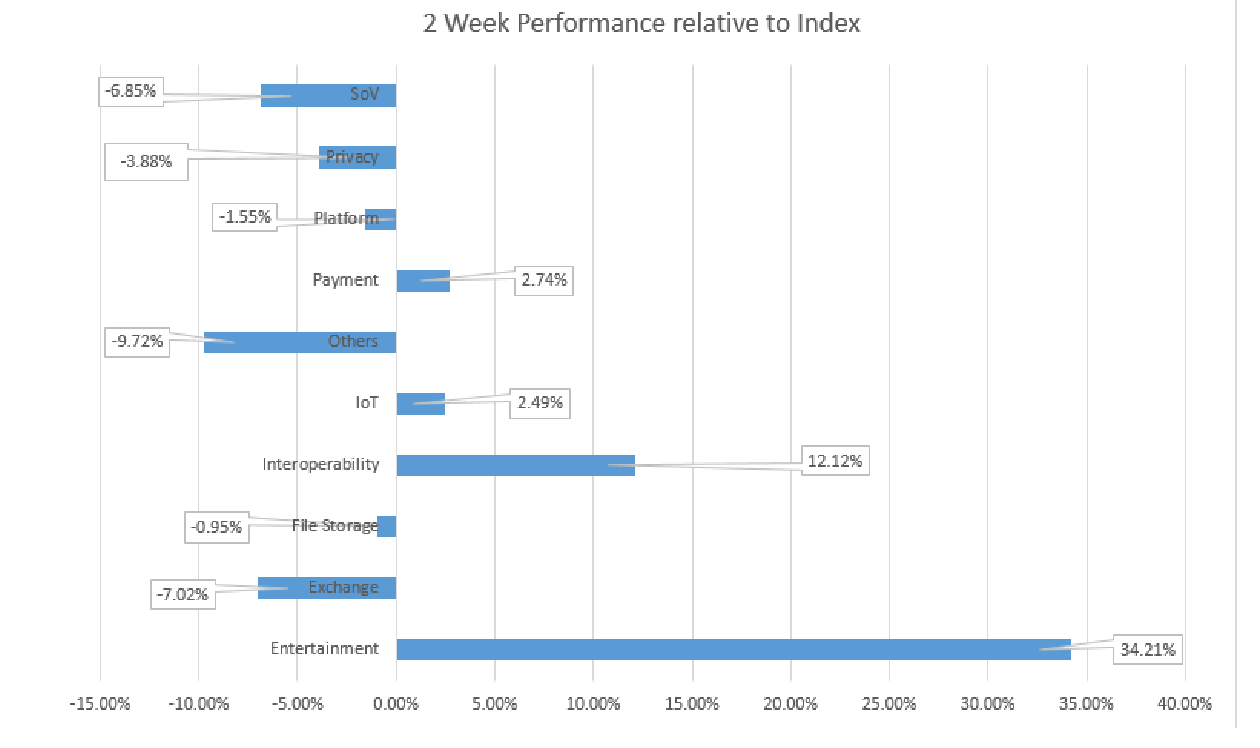 In general, the futures basis is trading with a premium between 0.5% and 1%. Overall, overnight funding is trading neutral. We are experiencing good trading activity within a narrow bandwidth.

The overall traded volume has not changed a great deal. Liquidations of positions have not increased, and open interest remains high. 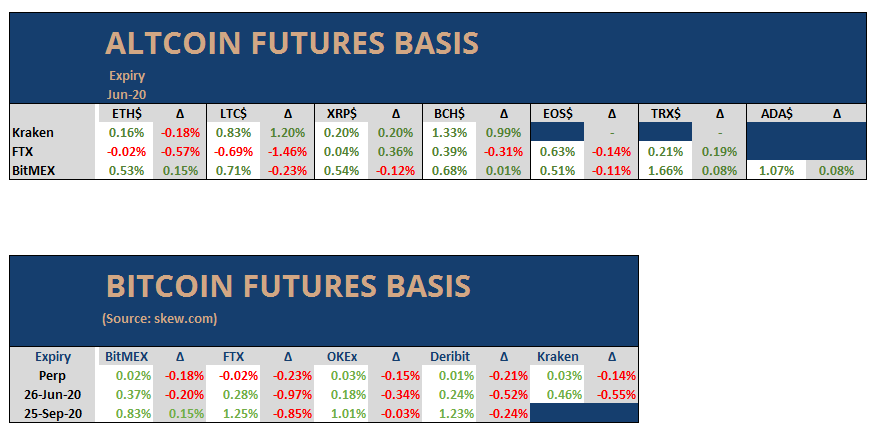 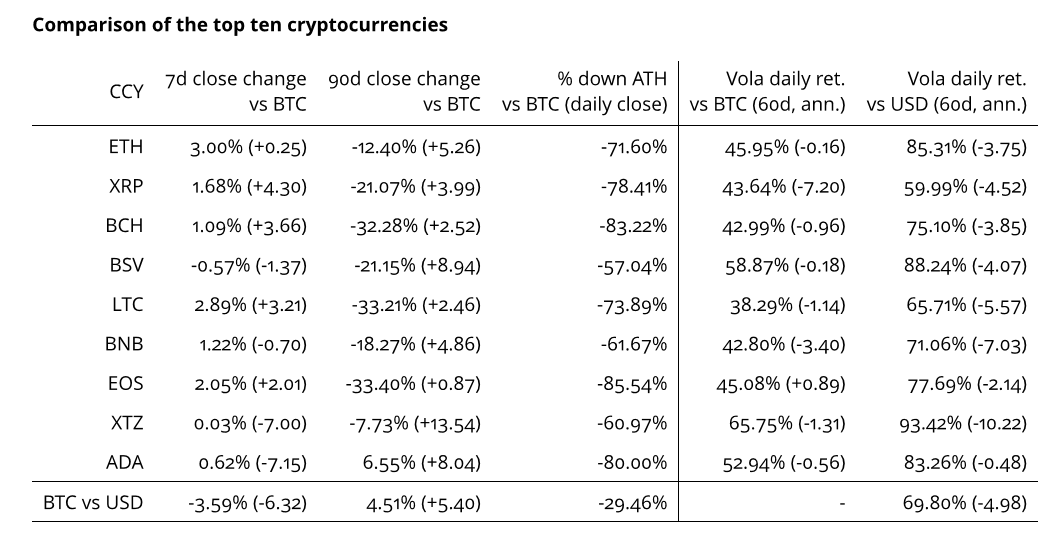 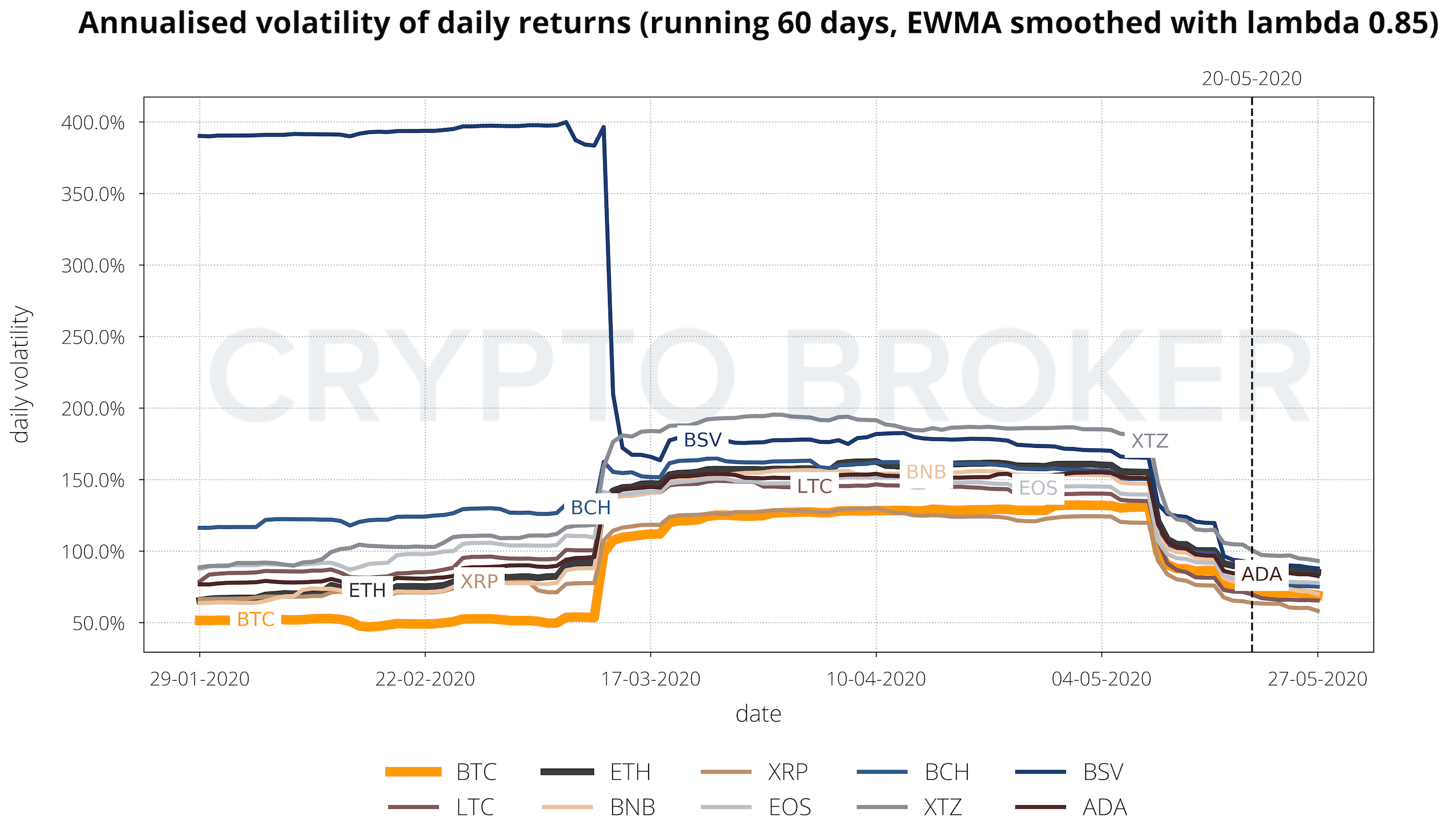 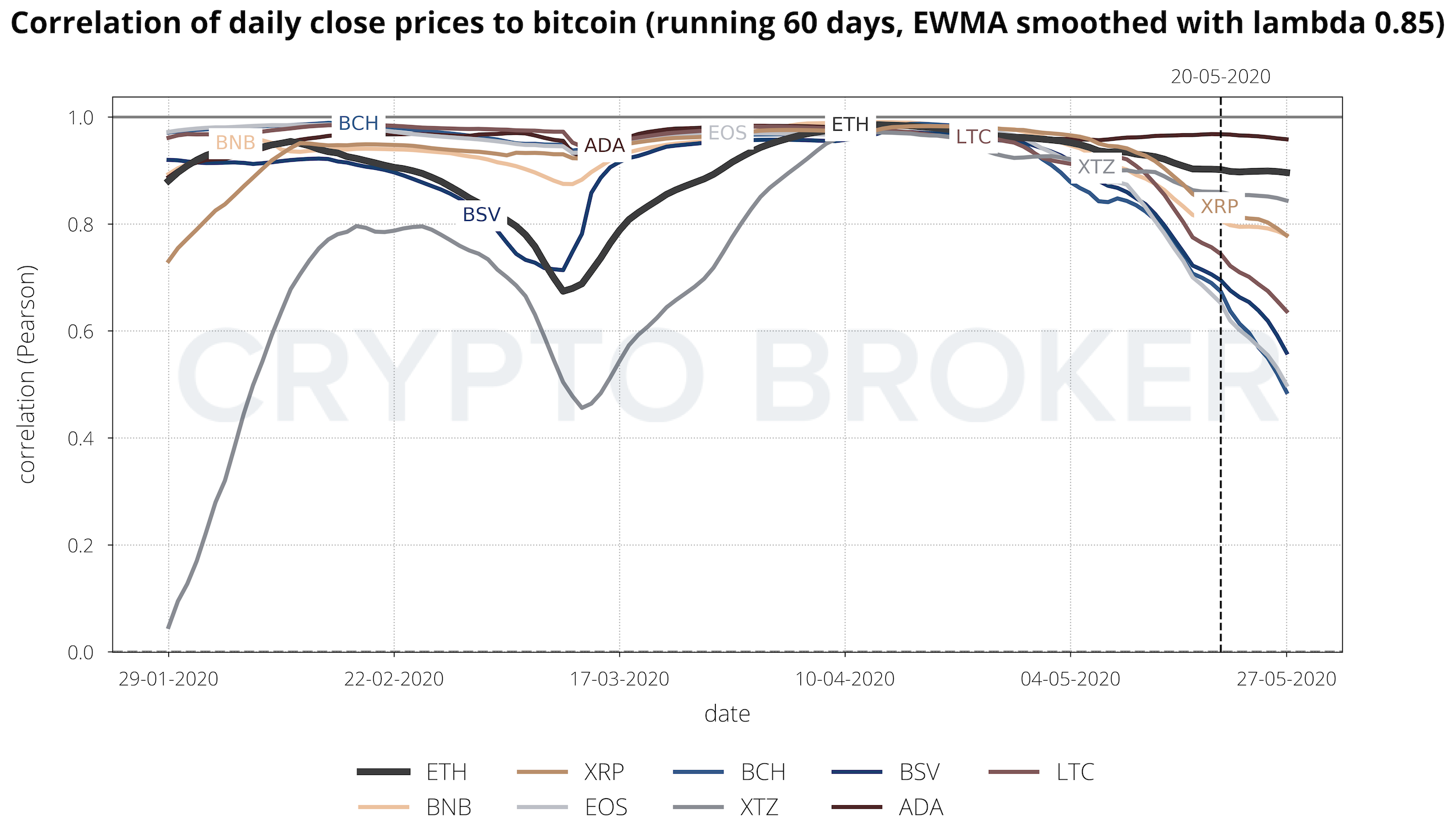 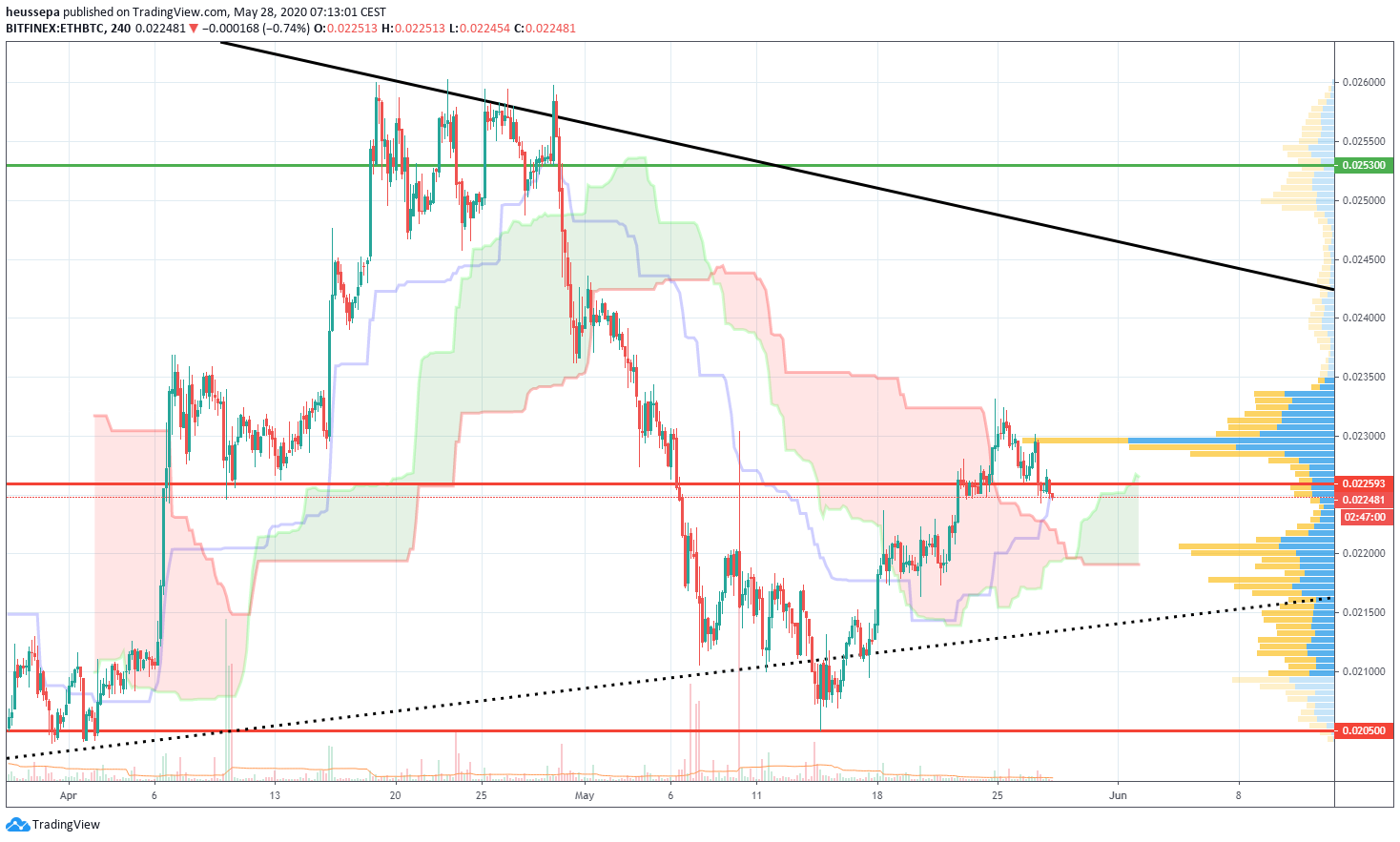 We only dipped briefly below the lower leg of the potential symmetrical triangle (now a dotted line). And then came back fiercely after touching the very important support level of 0.02050. After that, ETH pushed through the Ichimoku cloud as if it were butter and topped out at the biggest liquidity pool we have seen over the past six months.

We have mentioned these liquidity pool levels in the past: 0.02050 and 0.02300. Around each of these levels very large buyers came in through spot and margin. By the way, the Bitfinex ETH margin longs are still at very elevated levels.

So, where do we go from here? I expect the price to hold above the Ichimoku cloud, and to finally push significantly above the 0.02300 level. I think it will again take a stab at the upper leg of the symmetrical triangle. In case we give way on the downside, there is only one level that matters to me: the support at 0.02050. 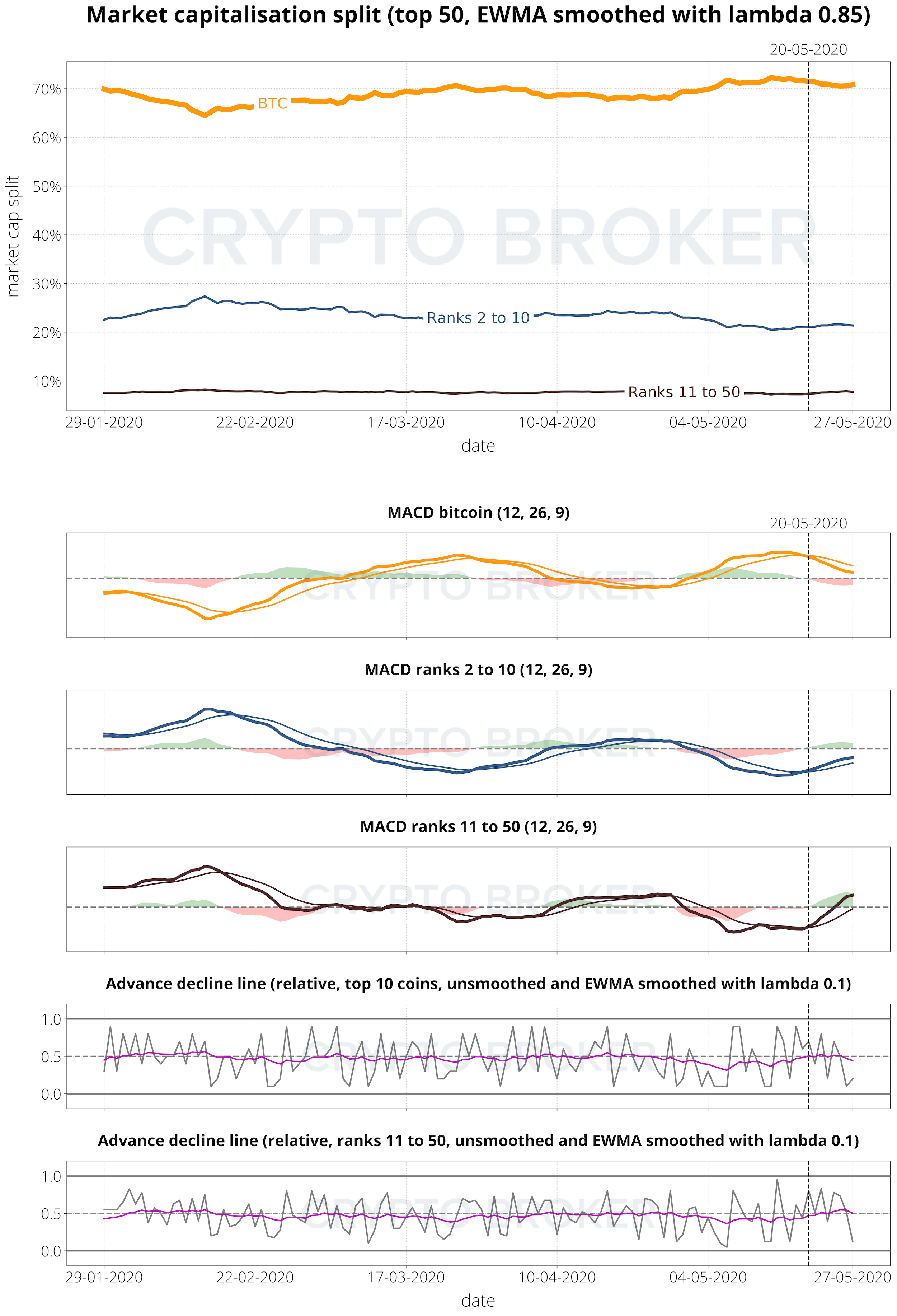 Advance Decline Line – the Advance Decline Line shows the ratio of coins for which the market cap increased relative to the market cap of BTC for each day.
ATH – all time high (maximum lookback period of 730€ days).
Data Source – tables and charts are based on daily close prices provided by Coinmarketcap.
EWMA – exponentially weighted moving average.
MACD – moving average convergence/divergence is a popular technical indicator to identify trends in the underlying instrument. It consists of the MACD and signal line, and the area shown in the background. The MACD line (strong) is the difference of two exponential moving averages, which are defined by the first and second parameter of the indicator. The signal line (weak) is the exponential moving average of the MACD line defined by the third parameter. The area in the background illustrates the difference between the MACD line and the signal line.
Pearson Correlation – quantifies the linear relationship between two variables.
Spearman Correlation – quantifies the monotonic relationship between two variables. As such, the Spearman Correlation is based on the ranked values of each variable and is used to detect non-linear relationships between the two.

Patrick Heusser is a Senior Trader at Crypto Broker AG. Prior to joining the company, Patrick worked as an Interest Rate Trader at UBS and held various positions in the IRCC (interest rate, commodity and foreign exchange trading) in London, New York, Singapore and Zurich. Patrick is an expert in trading and risk management. He also gained experience in other areas, such as building start-up companies. Patrick has a degree in banking from a business school. He has also taken various courses in technical chart analysis.