The reporting week was very quiet in terms of Bitcoin volatility ratios. The declining volume may also be attributed to the Easter holiday. Monday started auspiciously for the bulls, as Bitcoin was able to break the previously formed bull flag to the upside. The breakout took the price back above the 57’500 USD mark. However, with 58’873 USD at the end of the day on Tuesday, a higher level was reached once again. Around the zone of 58’000 USD, trading activities had already taken place frequently two weeks earlier. Accordingly, the daily closing prices of the following three trading days occurred in the area 58’700 USD, accompanied by very narrow trading ranges. On Saturday, an incipient price correction led back to 57,000 USD, but this price weakness was put into perspective again in Sunday trading with a price rise to the 58,000 USD mark. 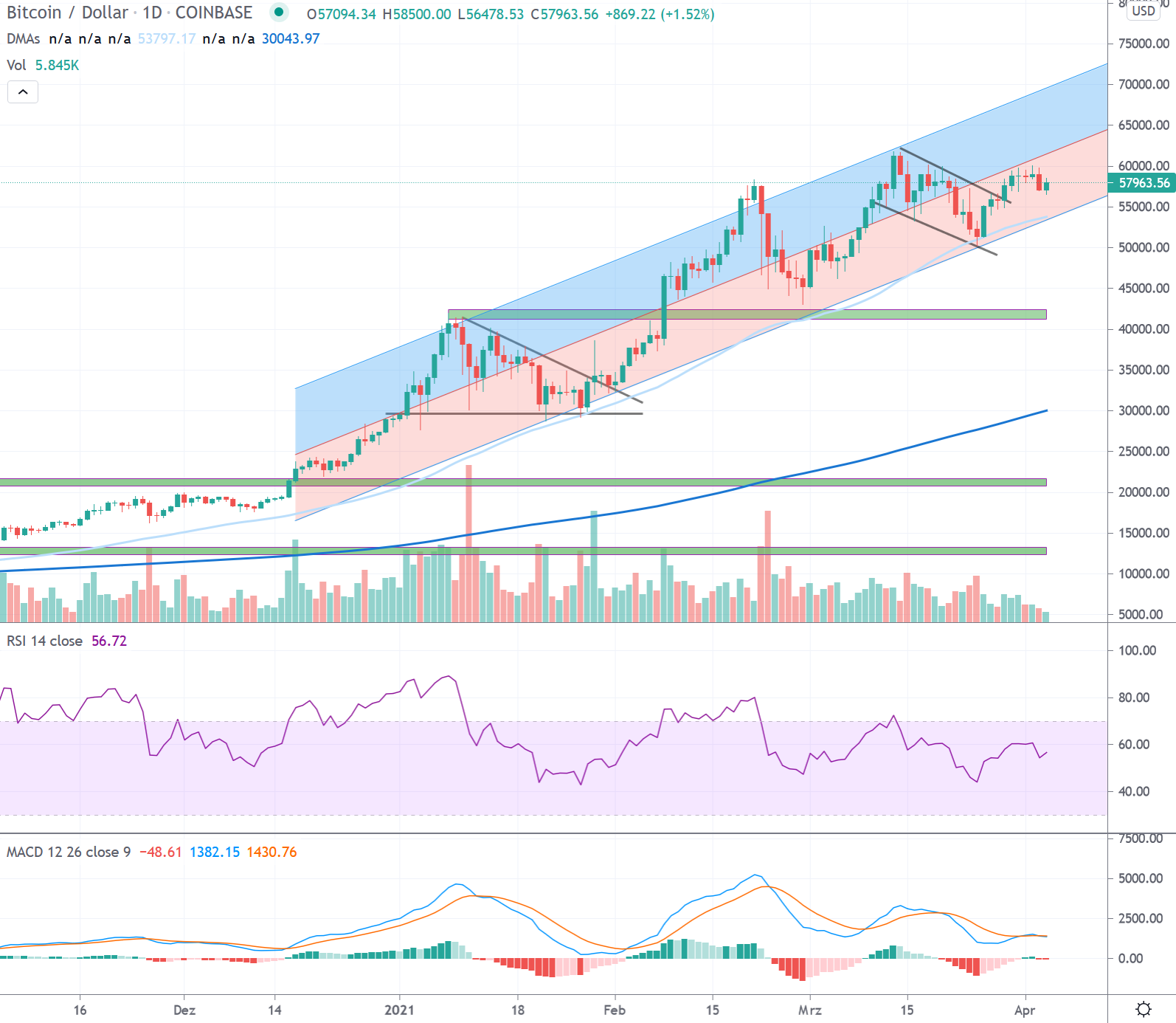 After the price plunge in mid-March 2020, a veritable countermovement established itself. This led to the resistance zones from 10’000 USD. After an initial rejection and a consolidation phase lasting almost two months, a breakout through the fundamental resistance zone followed on July 27, which had been established since August 2019 and had already caused Bitcoin to fail a few times to date.

The resistance zone around 10’000 USD was interesting in several respects. On the one hand, the 0.618 Fibonacci point of the entire downward movement, which was initiated at the end of June 2019 just below 14’000 USD, is located here. On the other hand, the zone around 10,000 USD simultaneously acted as a confirmation of the still bearish trend from lower highs since December 2017 (see macro view on a weekly basis). Bitcoin was able to establish itself above the newly created support in the 10,000 USD area since the end of July 2020 and provided a first confirmation of a trend reversal with the break of the resistance zone around 12’200 USD towards the end of October 2020. In the following weeks, the positive trend accentuated and led Bitcoin through the 14’000 USD resistance in early November 2020 and close to the then all-time highs around 20’000 USD for the first time in early December, which remained untouched for 158 weeks since the bull market in 2017.

Bitcoin has been in an accentuated uptrend since the break of the 2017 all-time high. This has been accompanied by three healthy consolidations so far, all of which found their bottom above the 50-day moving average (light blue line). Since the break of the 2017 all-time high, the price has been moving around a trendline, which acts as support and resistance, respectively. A resulting regression trend over two standard deviations has since served as an accurate indicator of the trend channel.

The structure of the uptrend is absolutely intact with the respective lows of the previous corrections. The market continues to develop around the mentioned trend line since mid-December. As expected in last week’s report, a breakout from the formed bull flag in the reporting week led to the 60’000 USD resistance and thus exactly to the trend line, which currently serves as resistance. The current state of the uptrend would receive strong validation with a breach of this trend line. If the recent upward movement weakens, the lower trend line of the regression channel in the 53’000 USD area acts as support. At the same level, the 50-day moving average (light blue line) is currently located, which so far serves as a good indicator of the bullish phase started since November.

The intact bullish momentum would take damage with the break of the channel and the 50 day average. In this case, the area around 40’000 USD serves as renewed support. 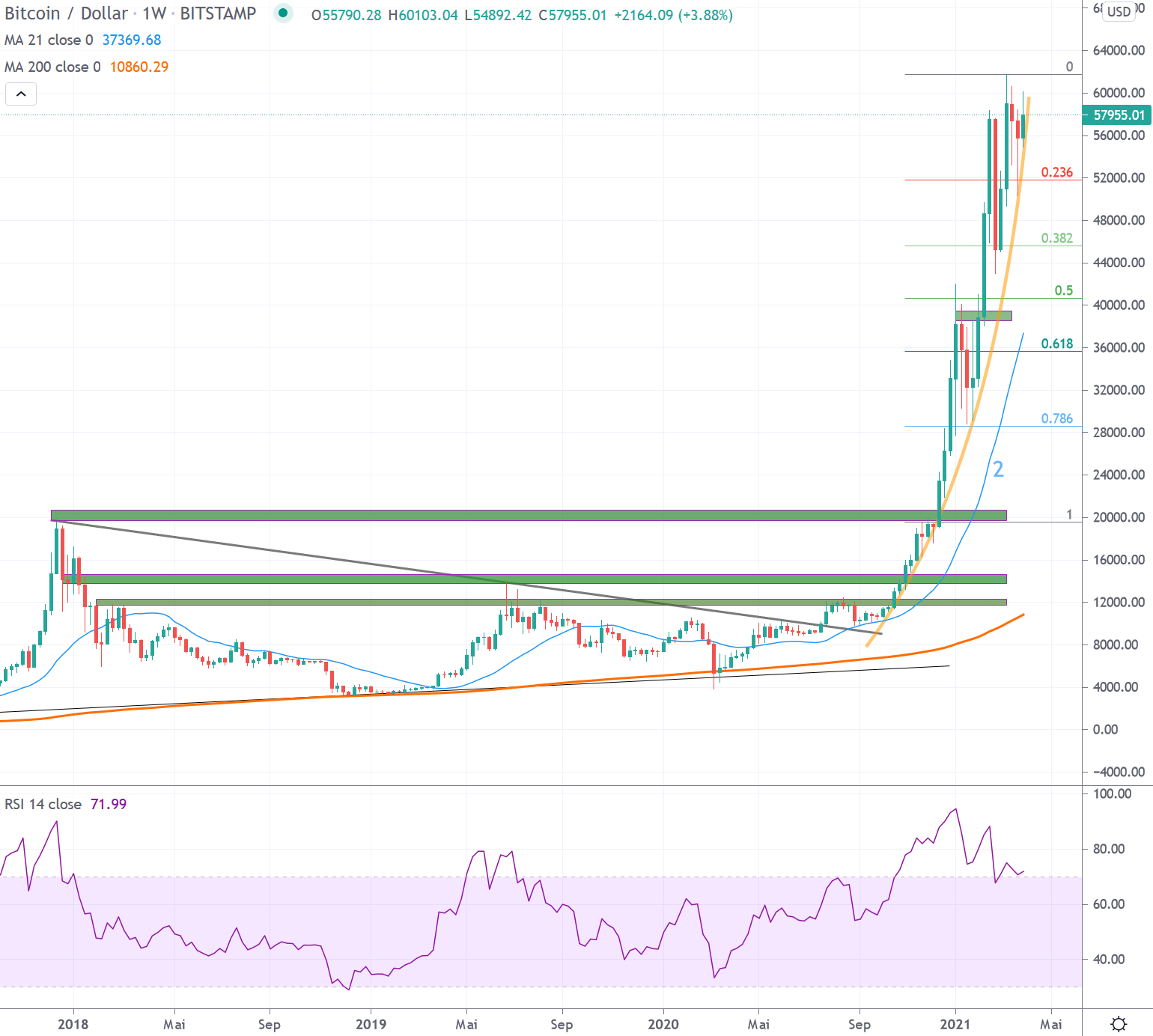 Bitcoin was able to set a higher all-time high above 10’000 USD for the first time in the weekly interval in 2020, which broke the prevailing bearish trend since December 2017. This broke the series of lower highs that lasted for 135 weeks (1).

With the price movements in the past year, a good foundation was created to sustainably climb new spheres beyond the all-time highs reached in 2017. The break of the 20’000 USD mark impressively demonstrated the power of the upward movement that had been established since October. It led to a parabola (yellow), which is currently ongoing and reached its first high at just over 42’000 USD. After a one-month correction, this was continued and found its high above 58’000 USD. After a second correction phase, the price recently reached its preliminary all-time high below 62’000 USD in the ongoing price discovery phase. Apart from that, there are no resistances for the time being.

In case of an incipient correction, a respect of the previously created supports (green) over the next weeks/months will be necessary to make the initiated phase of exploration in new price spheres sustainable. A departure from the parabola (yellow) would indicate a future slowdown of the upward movement and makes further and longer-lasting corrections more likely. Should these begin, the support zone at 39’000 USD, formed by the one-month march stop, remains to be observed first. In case of a continued correction, the 21-week average (2) becomes relevant, which so far could reliably indicate bull and bear phases. This is currently in the area 35’000 USD and rises accordingly fast. Further support zones in the weekly interval can be found in the area of 20’000 USD. 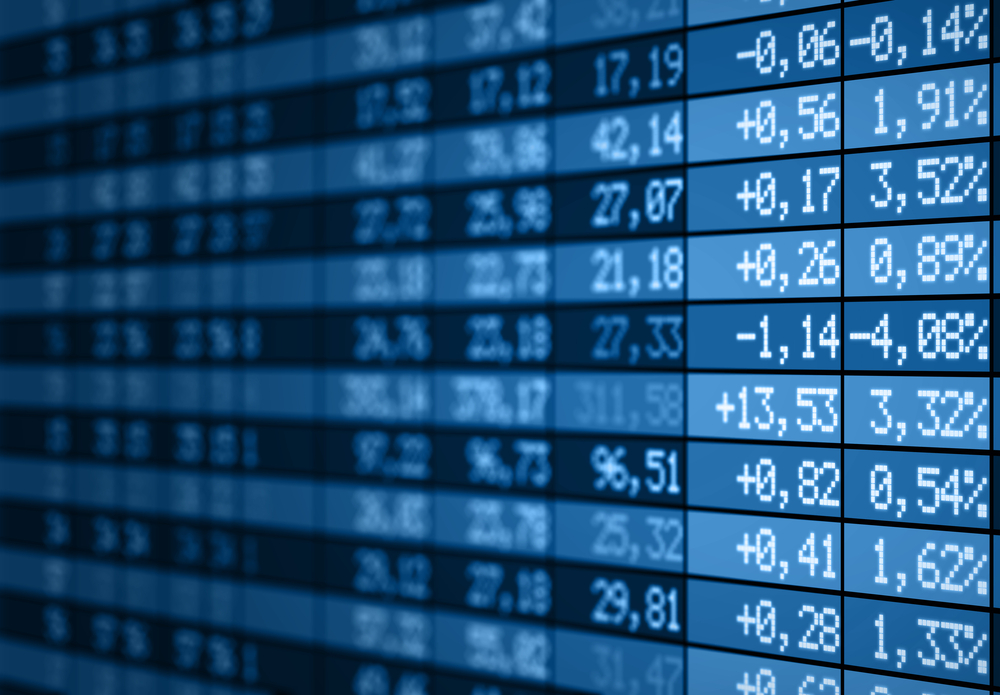