Today, I want to set financial markets aside to shed some light on the Virtual Reality industry.

A work colleague (business partner) brought me into the VR world. We talked about the product he was using: Oculus Quest.

I was a bit of a gamer in my teens and early twenties, but to be honest, it never really fascinated me all that much. There was not enough action and movement for me, and I got bored pretty quickly. Also, if you played a multiplayer game, where the skill levels of the players where vastly different, it simply was no fun at all.

Now, I am a dad of two kids, and during the lockdown, this little device was extremely useful.

Key numbers of the industry

But first, let’s have a look at the industry and a few key numbers: 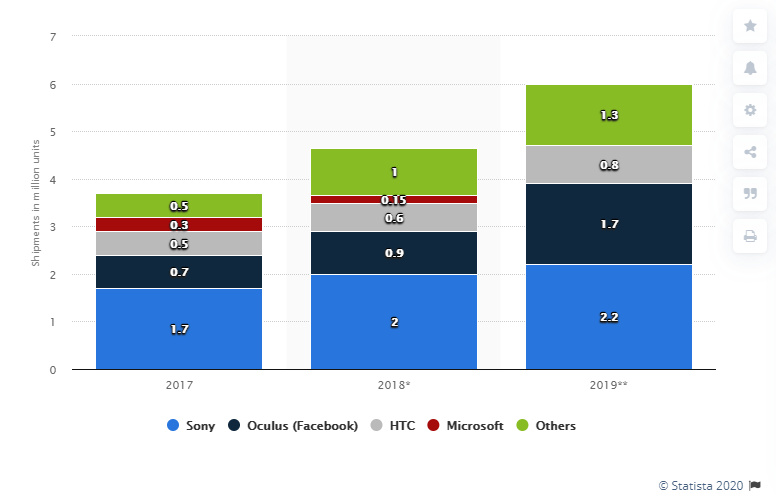 This industry is still very young, and the growth forecast is pretty impressive. 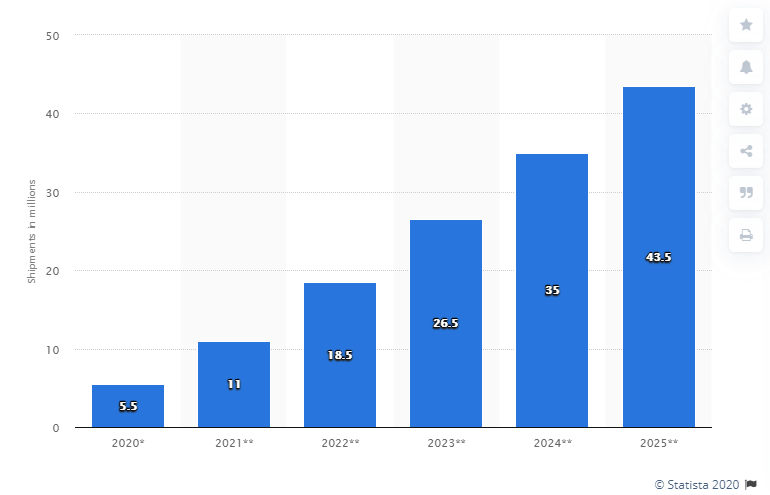 Let’s put this into perspective by comparing it to the smartphone device market.

The number of smartphones sold to end users:

The growth rate in VR from 2019 to 2025 seems to be fairly similar to the one we saw for smartphones between 2007 and 2017. However, the base is much lower, which brings me to the point I want to make. I believe we could see a much faster growth in VR. Also, VR and augmented reality (AR) are not only for gaming. In the same way that smartphones were not only for making phone calls and listening to music. The use cases have a very wide breadth and cover many different industry sectors, especially in light of the entire home office trend, with less travel and in person meetings/conferences. I will not go into more details here as it does not make sense within the scope of this report.

Connection to the blockchain industry

Nevertheless, I do want to offer a connection to the blockchain industry. To me, it looks like big tech companies are pushing forwards into the VR/AR space quite vigorously. This is nothing out of the ordinary, since they have the money and the technical skills, but it does pose a risk that they will control the industry for the coming growth years and profit the most. If you check out the VR/AR market, you will see that in the top five spots three large companies have positioned themselves.

Even with this short list, you can already sense how wide the VR/AR spectrum could grow over the next five years. It is definitely not “only” about gaming. Also, those products were acquired by the tech giants. Especially in the case of Oculus, the outcry was great when Facebook announced that you would need a Facebook account to connect the new Oculus Quest 2 model. Like your smartphone this is just another device where they can accumulate tons of user data and use it to get you to spend more money.

Patrick Heusser is Head of Trading at Crypto Broker AG. Prior to joining the company, Patrick worked as an Interest Rate Trader at UBS and held various positions in the IRCC (interest rate, commodity and foreign exchange trading) in London, New York, Singapore and Zurich. Patrick is an expert in trading and risk management. He also gained experience in other areas, such as building start-up companies. Patrick has a degree in banking from a business school. He has also taken various courses in technical chart analysis.