You are at:Home»Investing»Markets»Market review calendar week 25 – 2021 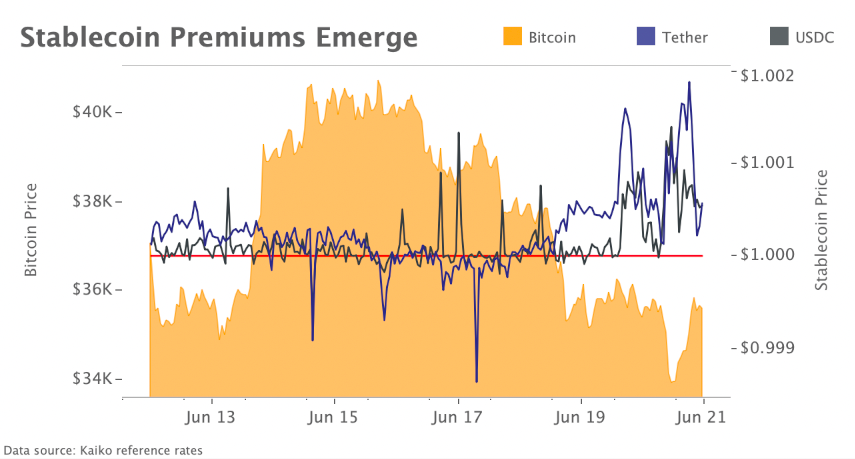 Nearly every top crypto asset ended the week down following a brief mid-week recovery. The price of Tether (USDT), the largest and most systemically important dollar-backed stablecoin, frequently fluctuates based on market volatility. This weekend’s market-wide sell-off caused Tether’s USD price soar to 1.002 USD as Bitcoin plummeted 4’000 USD in a mere 24 hours. USDC, an increasingly prominent stablecoin backed by Circle, also experienced a premium above 1.001 USD.

Stablecoins are considered risk-off assets, and in times of volatility traders will offload their crypto into USDT and USDC markets, creating an imbalance in buying pressure which can result in a temporary premium. Recently, Tether has come under fire for releasing a breakdown of its reserves, which showed that the majority is composed by “cash equivalents” like commercial paper and bonds, rather than cash itself. This positions USDC as a more transparent rival. 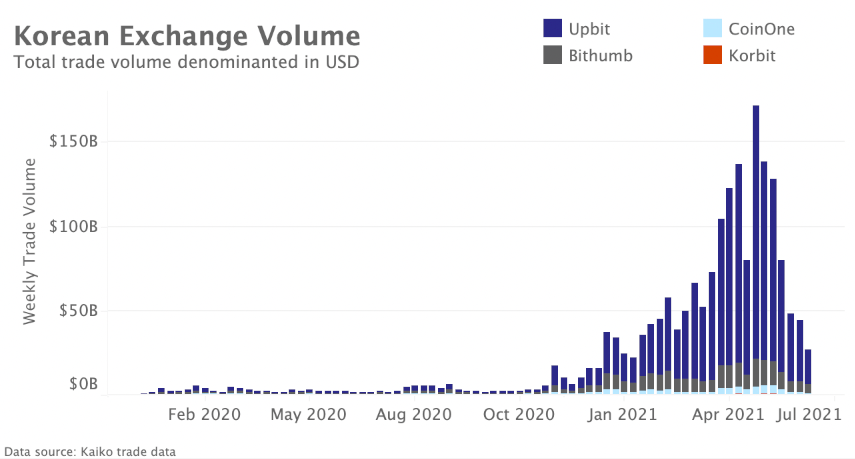 South Korea has long been a fascinating and vibrant microcosm of the crypto industry, separate from global crypto markets due to a unique regulatory environment that restricts cross-border capital transfers for foreigners. Market isolation has resulted in phenomenons like the “Kimchi Premium”, which has led to Bitcoin trading as much as 20% higher against the Korean Won compared with the U.S. Dollar. Despite the isolation, Korean exchanges have thrived over the past year and undergone an exponential surge in volume.

The “Big 4” exchanges of Korea – Upbit, Bithumb, CoinOne, and Korbit – collectively processed more than 30 billion USD in daily volume at the market’s peak, around three times higher than daily average volume for the KRX100, the index that tracks the top 100 equities on the Korean Stock Exchange.

However, a recent regulatory clampdown on exchanges threatens the entire industry, according to the Financial Times. Strict regulation has already pushed Binance and Okex to shutter their Korean operations, and further measures threaten the livelihoods of the more than 200 exchanges that operate in the country today. 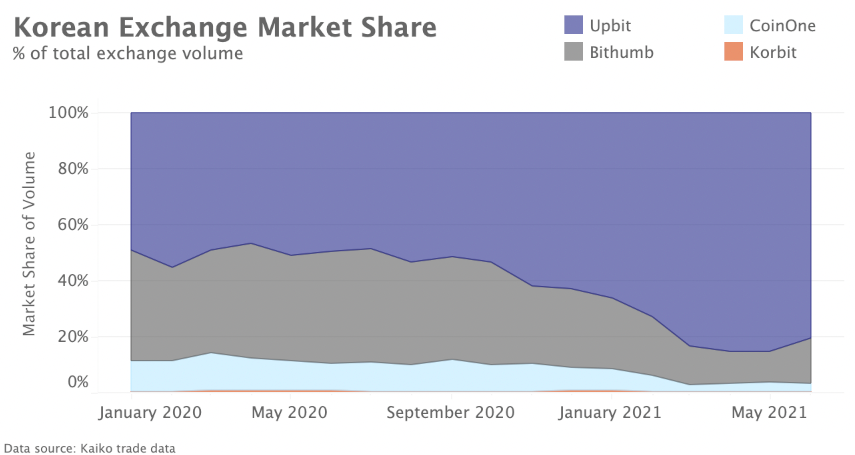 The biggest exchanges are working closely with regulators, but none are quite as dominant as Upbit, which over the past year has captured more than 81% of total market share. Upbit has become a force in the country, and recently announced intentions to expand globally. Korbit and CoinOne continue to lose market share, while Bithumb has struggled to compete. 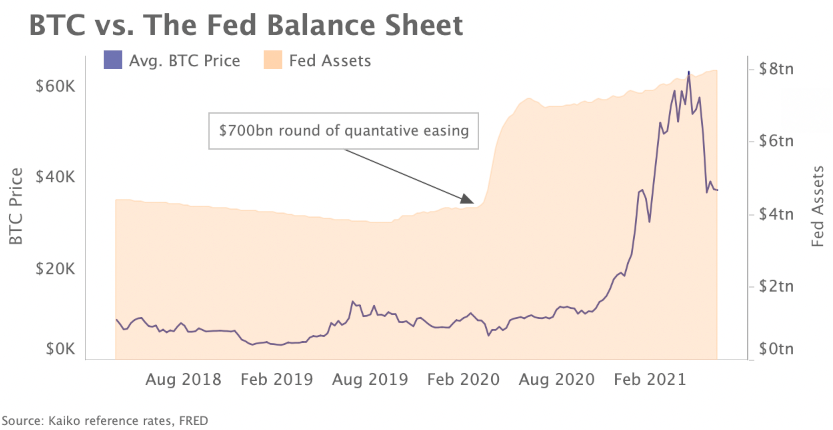 Over the past year, abundant liquidity and low risk aversion by institutional investors contributed to a record-setting run-up in both equities and cryptocurrency markets. At the start of the pandemic, the Fed launched a quantitative easing program that has since doubled their balance sheet, which recently crossed 8 trillion USD for the first time, up from 4 trillion USD in March 2020. This accounts for more than 35% of the U.S. nominal GDP, a level not seen since World War II.

Risk-on tech heavy assets have benefited heavily from cheap liquidity, with the Nasdaq 100 gaining 49% over the past year. However, Bitcoin has been perhaps the biggest winner globally in this risk-on environment, with 308% annual returns as of early June. But what happens when the Fed puts a pause to QE? Will cryptocurrency markets continue to thrive? 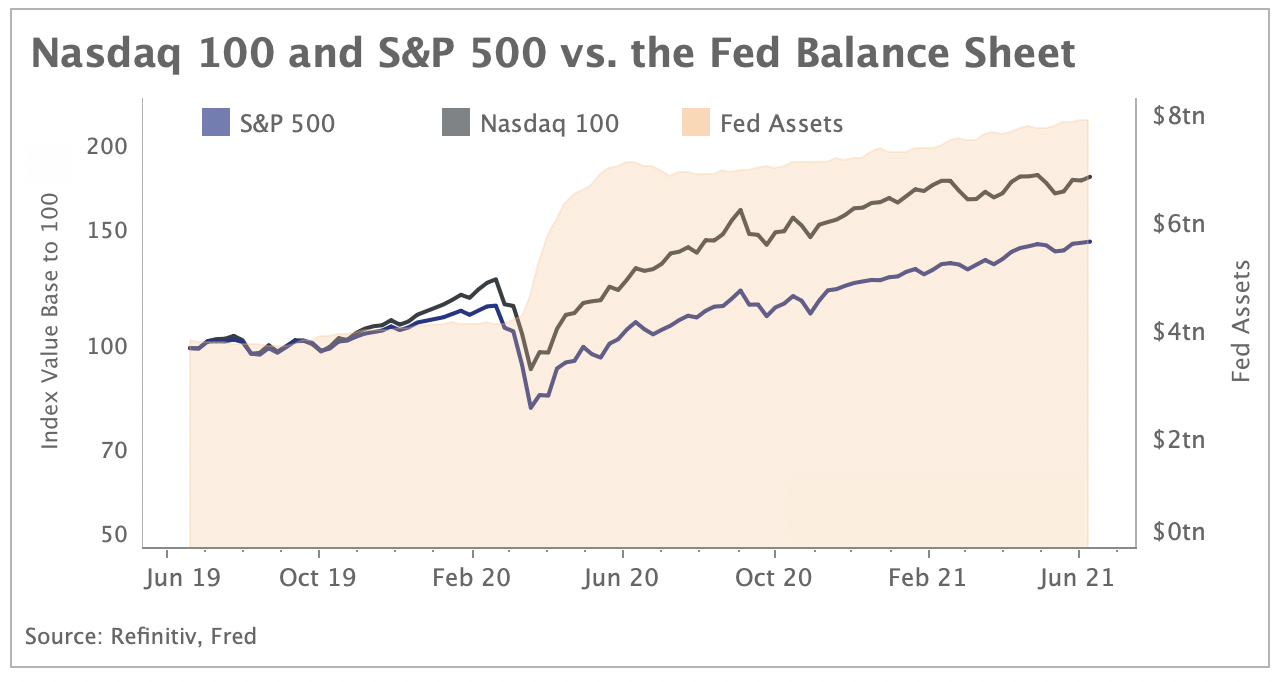 Accommodative monetary policy provided key support for both traditional and cryptocurrency markets over the past year, but recent inflation concerns have dampened sentiment globally. The PCE price index, the primary inflation measure used by the Fed, rose by 3.6% y/y in April. The May consumer (CPI) and producer (PPI) price indices also registered record high increases, confirming that inflationary pressures are indeed on the rise.

Growing fears around earlier than anticipated tapering of the Fed’s 120 billion USD monthly assets purchasing program has contributed to asset volatility and could spark a panic sell-off of bonds and a subsequent hike in U.S. Treasury yields (known as a “taper tantrum”). Rising U.S. Treasury yields could negatively impact investor’s appetite for risky assets such as crypto and cyclical growth stocks while raising the appeal of bonds.

It is clear that cryptocurrency markets are no longer isolated from global financial events and we can expect investors to pay closer attention to traditional economic data over the coming months.