You are at:Home»Investing»Markets»Market review calendar week 14 – 2021

Q1 2021 has come to a close, and with it one of the most consequential quarters in the history of crypto. A wide range of milestones was reached across various sectors of the industry: Tesla purchased a historic amount of bitcoin for its balance sheet, a record number of firms submitted crypto ETF applications, Visa enabled stablecoin settlement, Coinbase filed their S-1 in preparation for going public, BNY Melon announced crypto services for their clients, and a non-fungible token sold for $69 million.

Total Q1 trade volumes were the highest ever recorded, although March trade volume was down slightly from February along with the inflow of dollars. Overall, volumes for the top BTC-USD spot markets are magnitudes greater than they were a year ago, fueled in large part by institutional investors.

In March, the pace of dollar inflows slowed, although the ratio of U.S. Dollar to Tether volume is at its highest point in years. The ratio of BTC-USD to BTC-USDT trading volume can be considered an indicator of institutional inflows into crypto, assuming that institutional investors prefer using regulated fiat exchanges such as Coinbase, as opposed to exchanges that only offer stablecoin pairs such as Binance. From October to December 2020, USD spot volumes soared as Bitcoin underwent a record-setting bull run. However, throughout 2021 this trend has reversed slightly.

The majority of Bitcoin trades are still executed against Tether, which recently reached a settlement with the New York Attorney General, clearing the way for the stablecoin’s continued growth.

Altcoins posted record-setting returns in Q1, particularly those affiliated with NFT marketplaces (which enable the exchange of non-fungible tokens) and alternative blockchains (often referred to as ‘Ethereum-Killers’ for their scaling solutions). What do NFT marketplaces and “Ethereum-Killers” have in common? Most platforms that enable the exchange of NFTs operate on the Ethereum blockchain and have had to deal with high transaction fees and congestion that have plagued the network for years.

It is no surprise, then, that the tokens powering competing blockchains have seen huge returns over the past few months. The Solana blockchain’s SOL token has gained more than 1’177% YTD while the Cardano blockchain’s ADA token has risen more than 560%. ADA was at one point the third largest crypto asset by market cap. Ethereum’s returns of 152% pale in comparison. 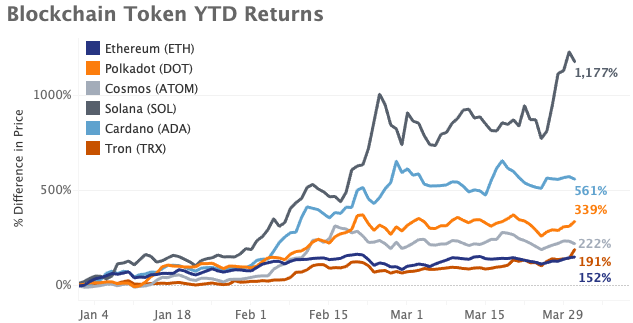 Despite record high fees, Ethereum’s on-chain activity still remains magnitudes greater than any competing network which suggests projects are not yet at the point of vacating. 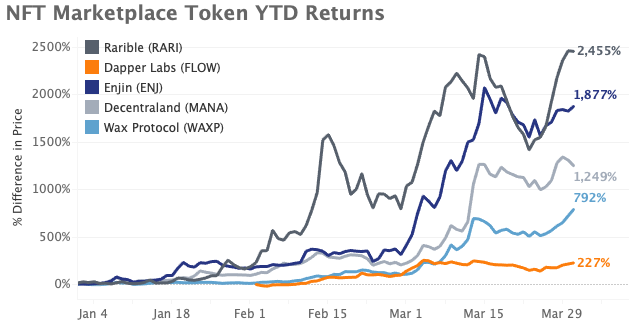 While NFTs themselves have sold at increasingly excessive rates, tokens affiliated with NFT marketplaces have tangentially benefitted from the mania. Rarible marketplace, a platform that enables the creation and sale of digital collectibles, has seen its token appreciate 2’455% since January 1st. Decentraland, a virtual world where players can purchase NFTs, has seen its MANA token soar 1’249%. These tokens serve functions such as governance, utility, and rewards, but also serve as a gauge for sentiment surrounding the NFT industry.

Over the past few months, total trade volume has soared on Uniswap, but the number of trades executed has declined. Trade count is a far more realistic measure for DEX usage than volume, which can be skewed by just a few whale traders. The top five trading pairs on Uniswap see under 10k trades a day, which pale in comparison to Coinbase’s top pairs, which see from 100k-300k transactions a day. 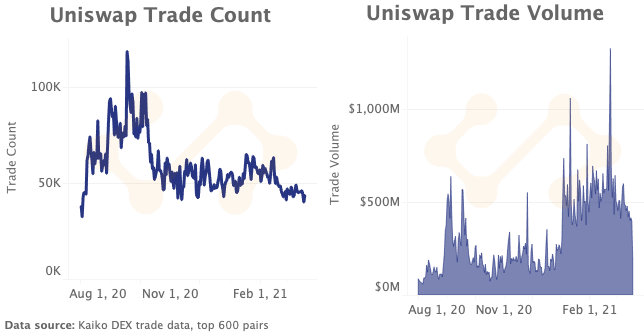 Typically, an increase in volume corresponds closely with an increase in trade count, but with Uniswap we see a divergence in this trend. The only way this can occur is if the average trade size has soared, which is indeed what has happened: average trade sizes now range between $10-$30k per trade, which is huge compared with centralized exchanges. 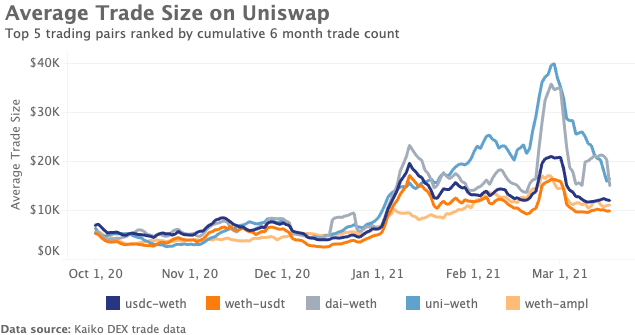 For large trades, it is often more cost efficient to use a DEX, which overall will have lower fees than centralized exchanges. However, there could be something else at play: it is relatively easy to generate fake volume on a DEX considering anyone can create a trading pair and no one can control order flow. To combat inflated volumes on DEXs, it becomes the job of the data aggregator to filter trades, which is no simple task.

As traditional financial markets lose momentum following a record-setting run up in equities, crypto markets continue to soar. The S&P 500 and Nasdaq indices are up only single digits for the year, and Gold is down more than 13% in a sharp turnaround for the popular store of value. Meanwhile, Bitcoin closed Q1 up 103% YTD and Ethereum is up 150%, showing that crypto markets are still the best performing asset class by a long shot.