You are at:Home»Investing»Markets»Crypto Highlights March

Wall street giant Morgan Stanley, one of the largest American investment banks, said that it will exclusively offer access to bitcoin-related funds to its wealth management clients. Morgan Stanley’s wealth management unit manages nearly $4 trillion in client assets across more than 16’000 advisors. They effectively become the first major US bank to offer bitcoin exposure, capping investments to as much as 2.5% of total net worth per client.

As the demand for Bitcoin investments has significantly surged over the past year, the Morgan Stanley considers the asset class as inevitably investable according to an internal investor note. Due to the lack of exchange-traded products as in Europe or a Bitcoin ETF in the United States, the bank will expose its clients to three bitcoin funds, two of the funds on offer are from Galaxy Digital, while the third is a joint effort from asset manager FS Investments and NYDIG.

“For speculative investment opportunities to rise to the level of an investable asset class that can play a role in diversified investment portfolios requires transformational progress on both the supply and demand sides. With crypto currency, we think that threshold is being reached. A firming regulatory framework, deepening liquidity, availability of products and growing investor interest – especially among institutional investors – have coalesced.” – Morgan Stanley.

The adoption of Bitcoin has taken an unprecedented pace, since the second half of 2020 we have witnessed different cohorts getting exposure to the asset class. Corporations like Square and recently Hong-kong listed company, Meitu, but also university endowments like Harvard and Yale, and even cities like Miami interested in adding bitcoin to its treasury reserve. In the same vein, during the week of March 8th, Brazil had officially launched its first Bitcoin ETF listed on the B3, a stock exchange located in São Paulo and the second oldest of the country.

As the industry matures, there are also improvements in the tone used with regards to Bitcoin. For example, on March 22nd, during a virtual panel discussion on digital banking hosted by the Bank for International Settlement, Federal Reserve Chairman Jerome Powell mentioned that Bitcoin is more of a substitute for gold than a replacement to the dollar. On March 31st, Goldman Sachs announced being close to offering its institutional clients access to Bitcoin as well. Furthermore, the world is also waking up to the sophistication of the crypto infrastructure. On that note, the world’s largest custodian bank, BNY Mellon invested in the $133 million financing round of FireBlocks, which will serve as the main crypto custodian on behalf of BNY clients.

At 21Shares, we expect this trend to continue for two reasons:

On the final note, as the institutional adoption has taken over the narrative of Bitcoin’s adoption, it is fair to admit that smaller players remain unseen. But at 21Shares we also investigate economic activity on the bitcoin blockchain and we can’t be more optimistic about this current cycle as the wallets holding less than 1 BTC have reached an all time high lately, much more than the last cycle in 2017. 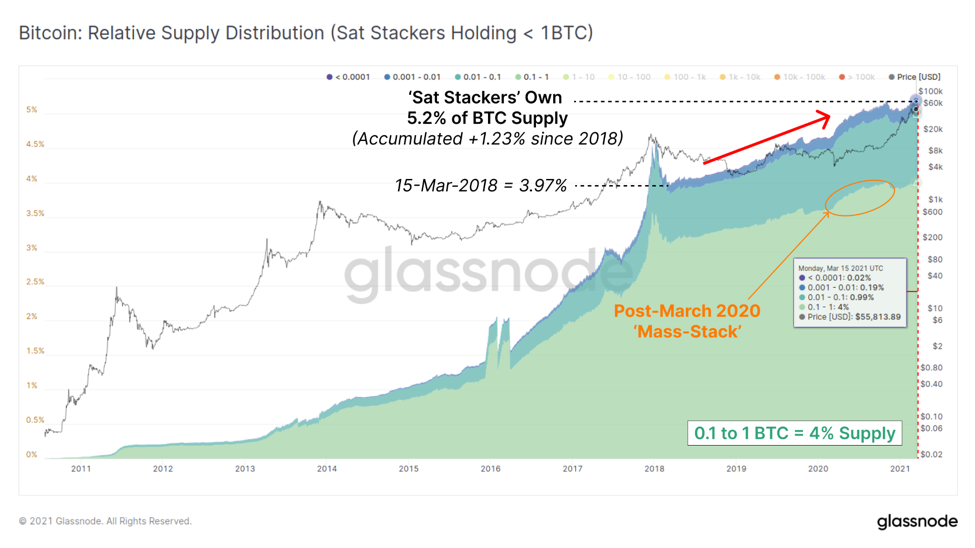 Established venues also want to tap into the wider retail audience. For example, the Chicago Mercantile Exchange (CME) with over $75 billion in assets will launch micro bitcoin futures in the next two month, sometime in May. These futures will represent in size one tenth of a Bitcoin, in order to efficiently provide Bitcoin exposure to a wider audience in their client base and respond to the demand for smaller-sized futures contracts. And this is a testament to the fact that both institutions and retail investors are embracing the asset class at a greater pace than ever before.