You are at:Home»Investing»Markets»Crypto Highlights April

The market-driving news of the month of April was Coinbase’s pivotal direct listing which saw the company initially go public at more than a $100B valuation – before settling at a valuation of around $65B on April 20th. Coinbase’s listing represents a large milestone in the increasing legitimacy of the cryptoasset industry as it forces traditional finance to pay more attention to the lucrative business models facilitated by Bitcoin and blockchain technology.

Given the direct listing mechanism used by Coinbase, where the company did not issue new shares but rather investors and employees were free to sell their own shares on the market (with no lockup), Coinbase (ticker: COIN) fared poorly on the listing date. It has since consolidated in the $330 range as investors come to terms with the fundamental value of the company. 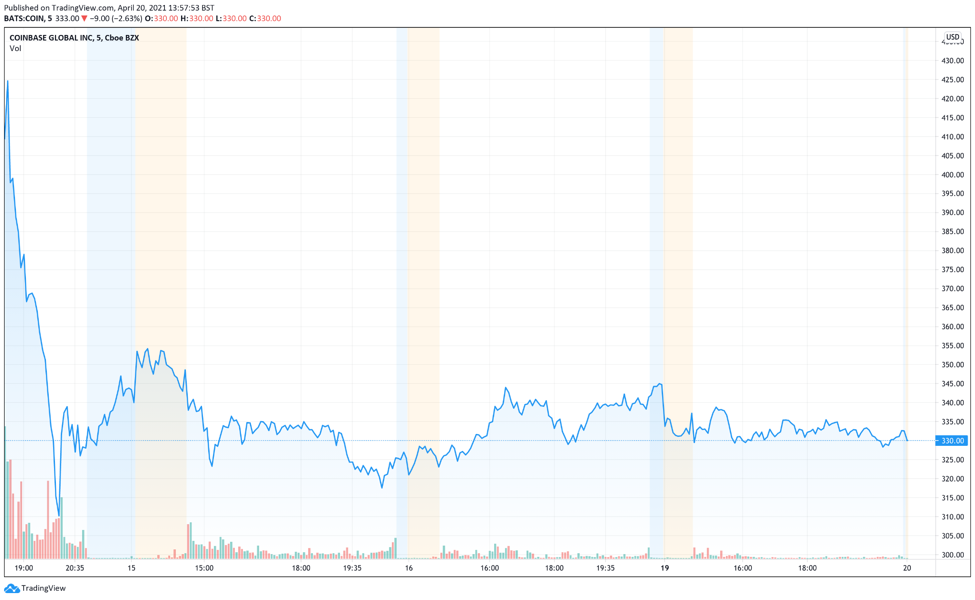 Some of the largest initial providers of liquidity for Coinbase shares were leading investment funds in Coinbase such as Paradigm and USV, as well as the Coinbase’s executive team.

There are three medium term implications of the outcome of the direct listing: (1) the new wealth enjoyed by Coinbase employees and investors could potentially flow back into the crypto market; (2) the crash in the crypto asset market following the listing shows that there was significant overleveraging by traders on a first day “Pop”; (3) Coinbase’s direct listing will likely be a forebearer of many other crypto-businesses going public.

Following the Coinbase direct listing, the wider crypto market experienced a deleveraging-driven downturn as the chart below shows.

The fact that the crypto asset market was able to sustain a large amount of selling pressure, and the news of Tesla reducing its position, is a signal of the strong underlying bid for Bitcoin and the overall resilience of the market. News of JP Morgan launching an actively-managed product for their clients and Larry Fink, CEO of BlackRock who confessed to CNBC that Bitcoin will become a great asset class, add credence to this thesis.

For the record, 71.4% of the traders that bought Bitcoin (BTC) between 2 weeks and 6 months ago sold their positions during this past market drawdown from $64K down to $48K. On the chart below, over 33% of that cohort bought BTC between 1 month and 3 months ago. Included in this portion of the market are long leveraged traders that got liquidated on unregulated venues where they can trade the underlying asset for over 100x. But there’s also certainly active funds that perform rebalancing on a quarterly basis (ie, hedge funds). 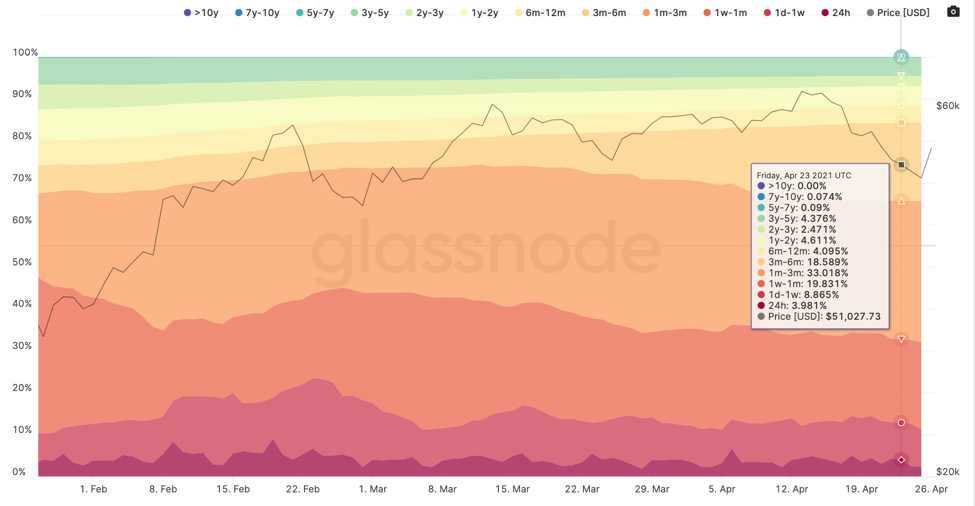 As the number of small bitcoin holders (less than 1 BTC per address) has been on the rise since late December last year, it shouldn’t come out as a surprise that some of these sellers are part of the retail cohort. Indeed, the price of Bitcoin is up 3x from $19’000 which triggers profit taking across the board as we have seen in the case of Tesla.