You are at:Home»Investing»Crypto markets in free fall – Reasons and outlook

Since last week, a huge sell-off has caused cryptocurrencies to suffer massive price losses. What were the reasons and what are the prospects for the future? A summary of what happened, and an outlook on the status of digital assets.

Within two weeks, the price of Bitcoin (BTC) plummeted by 50% – from just under USD 60,000 USD to below 30,000 USD at its lowest point. Ethereum (ETH) and other altcoins were hit even harder. The second largest cryptocurrency plummeted from 4,300 USD to 1,800 USD in the same period, a correction of 60%. Prices have since recovered a bit, however, most crypto-assets are still well over 50% off their highs. Looking at the price history over the last few years, it becomes clear: volatility is nothing unusual for the crypto markets. Some investors describe it as the “price of opportunity“.

Nevertheless, the current sell-off shocked investors, especially because the market tenor has been bullish since November 2020. The depth of the correction is already prompting some voices to proclaim the “end of the bull market”. Why did this selling pressure seemingly come out of nowhere, and what about the fundamental factors around cryptocurrencies?

Bitcoin has been one of the best performing assets since its inception. This potential does not come without a price. Assets that embody exponential growth do not continue their price rise gradually. Sometimes it pays off to look at the price trajectory of Bitcoin and other cryptocurrencies from a more distant lens. Despite the price plunge of the last few days, Bitcoin still shows an increase in value of just over 220% compared to the beginning of the current bull run at the end of October 2020. Over the last five years, the digital currency gained an impressive 8600%, which equates to an average annual return of over 1700%. This is despite the fact that the cryptocurrency went through a three-year period of falling prices, a so-called bear market, since the winter of 2017/2018.

During the summer of 2020, the historical series of lower prices was broken. Just a few months later, the crypto asset set off on a parabolic price rise, passing through the old all-time high of 20,000 USD and marking a new one at 65,000 USD. Price corrections between 20-35% occurred on the way to the new all-time high. Although earlier cycles were also characterized by temporary corrections of 60% and more, the recent plunge of -50% was remarkable. 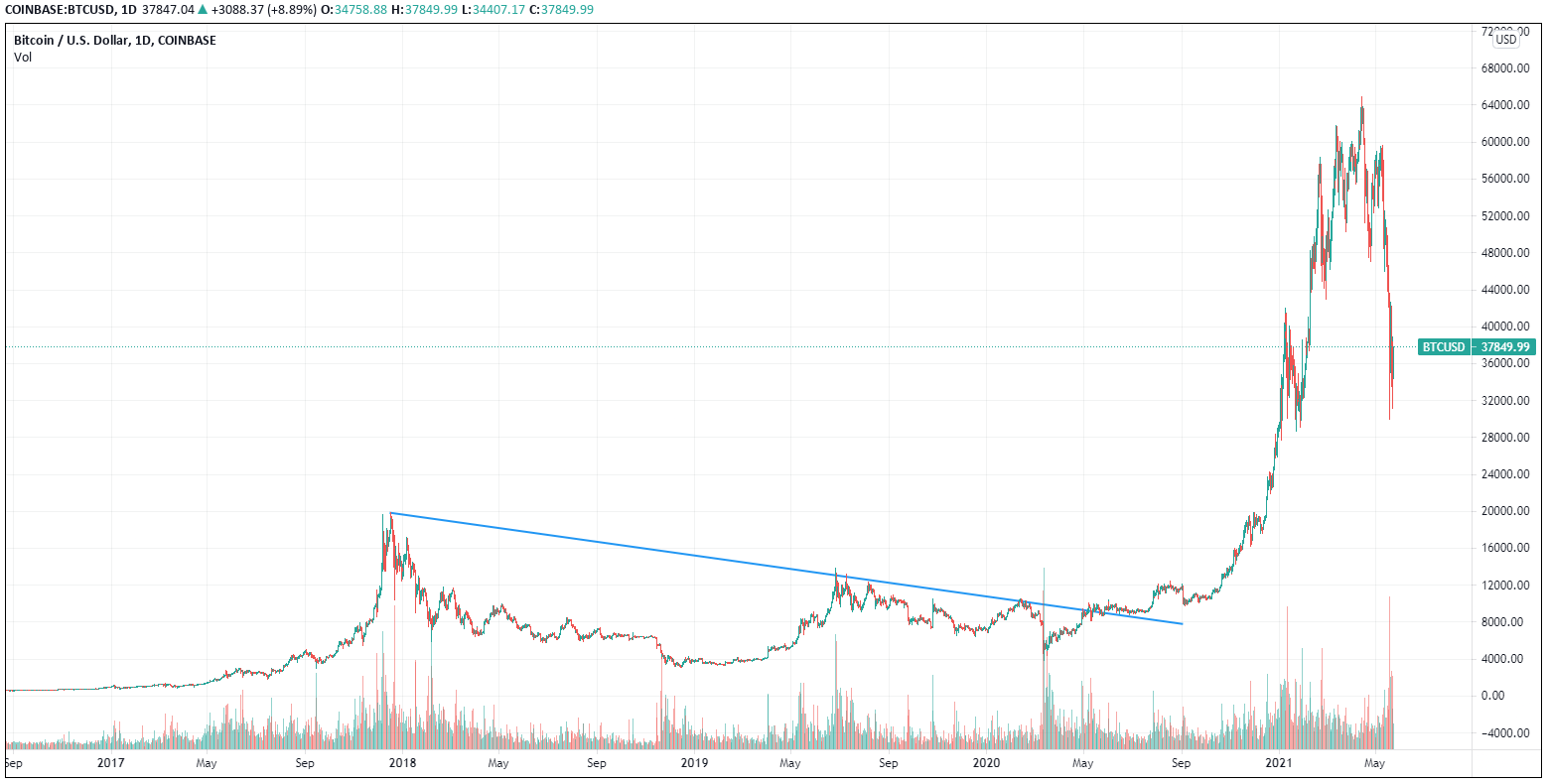 In addition to the price action, it should be noted that cryptocurrencies are traded 24/7, without the involvement of entities that intervene in the market with unlimited financial resources. The past has shown that it is in the nature of free markets to go through periods of exaggeration until a new equilibrium is established. In particular, the dawn of new eras, such as the early days of the Internet with the dotcom bubble, is marked by frantic price discovery phases.

“Fear and Greed” has always driven the free market and price drops of 60% and more were often observed and common even in traditional markets before the “open market operations“. Psychology plays an important role in all markets. A clue to the status of investor psychology in crypto markets can be estimated from sentiment indices. Currently, the Crypto Fear & Greed Index is at a historically low level, which has often turned out to be an interesting buying opportunity in the past.

Crypto exchanges are far ahead in offering instruments that allow leveraged trading. A large portion of market participants continue to be private investors, also known as “retail traders”. The so-called leverage factor, i.e. the factor of how many times the invested equity can be leveraged with additional debt, is over 100x for some exchange operators.

Asian market participants in particular often and willingly use leveraged instruments to speculate on price movements. Leveraged accounts are automatically liquidated if the price moves against the speculated direction. During last Wednesday’s price plunge, over 9 billion USD was liquidated in 24 hours this way. The total of open futures positions, also known as open interest (OI), also halved from 20 billion USD to 10 billion USD. Thus, billions of dollars were thrown onto the market in a very short time, accentuating the price decline.

Bitcoin currently covers several types of applications at once. It serves as a digital currency within a decentralized and censorship-resistant payment network. Anyone with Internet access can join and use the ecosystem. The given monetary policy is equipped disinflationary, and accordingly, Bitcoin is also suitable as a store of value. These non-exhaustive attributes are a great fit for the current digitized and monetary experimental era. The ecosystem around digital assets like Bitcoin is growing by the day, and a merging with the traditional financial system is evident.

Cryptocurrencies are also finding their way into investment portfolios with increasing frequency thanks to their attractive and uncorrelated risk/reward ratio. The banking landscape is just beginning to discover the new asset class of digital assets. However, there is far more to cryptocurrencies than “just” an appealing risk/reward ratio. The disintermediated transfer of value over the internet is possible and has been increasingly used for over a decade. The network effect in a monetization-driven ecosystem is leading to exponential growth rates. The number of wallet addresses on the Bitcoin network, daily value transfers, and the hashrate, a metric that measures the computing power to secure the network, are at or near all-time highs. The second largest cryptocurrency, Ethereum, currently has even higher application growth than the Bitcoin network. 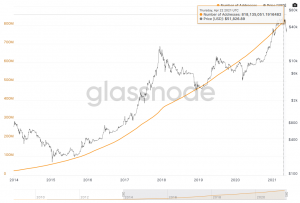 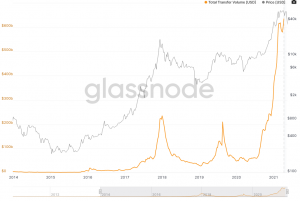 Network effects and the birth of digital ecosystems

Cryptocurrencies have grown over time, and Bitcoin has been joined by many blockchain-based projects over the years. Decentralized computing platforms such as Ethereum, which are capable of executing more complex transactions via so-called smart contracts, are now replicating countless use cases on the blockchain. In the field of decentralized finance (DeFi), a new financial ecosystem has emerged with trading venues, credit markets, yield curve liquidity pools, and derivative instruments. Tokenization has the potential to digitize all of the world’s assets and is democratizing investor markets with its borderless applicability. Unique tokens (NFTs) can be traded and provide unaltered proof of origin and change of ownership of a digital or digitally represented asset.

In short, the ability to transfer digital assets over the Internet – or rather to embed and work with them in ecosystems – represents the next phase in the use of the Internet. While the first revolution of the Internet brought commercial commerce to the Internet through graphical representation with web browsers, the second phase, namely to transact significant parts of the financial infrastructure directly over the Internet, is well underway. 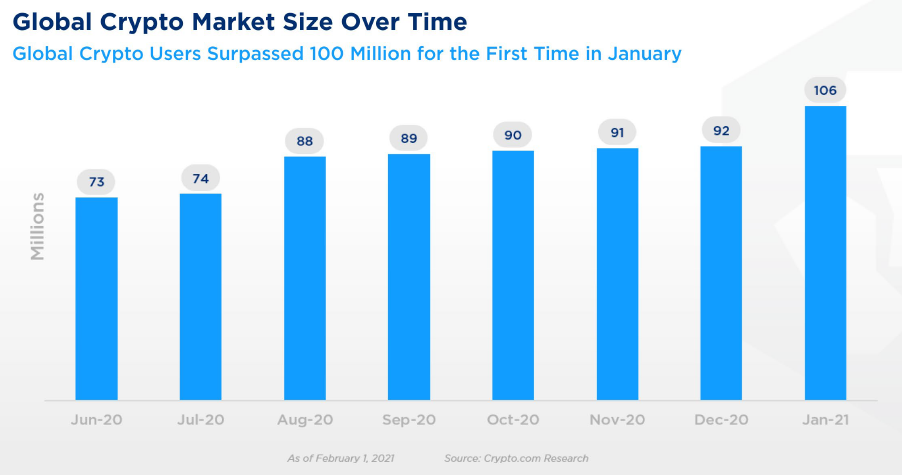 The estimated number of crypto users has exceeded the 100 million mark this year, and has annual growth rates of over 100%. Consequently, over 1 billion people will be using cryptocurrencies in just over three years. Digital central bank currencies (CBDCs) and the introduction of private stablecoins like Diem will further drive global adoption of digital currencies.

In the early stages of the cycle

Cryptocurrencies are here to stay. They will take an increasing share in our digital society. Price fluctuations like those seen recently are indicative of a new era. Amazon rose from $1 after its 1997 stock market debut to over $113 in December 1999, but fell back to $5 after the “bursting of the Internet bubble” in November 2001. We now know that the Internet was not a bubble and spawned weighty players that are now among the largest capitalized companies in the leading stock indices. Bitcoin and other digital currencies are still in the very early stages in terms of adoption – with according potential.

Of course, risks are also present in the digital asset class. Compared to existing asset classes, the risk/return profile is particularly interesting here. An appropriate weighting and the omission of leverage should facilitate the entry into the new asset class.