You are at:Home»Focus»Legal&Compliance»The Virtual General Assembly – Voting with ERC 20 Token

Home office, video conference platforms, online shopping and other digital solutions are booming in times of the coronavirus. Is it possible to vote during a general assembly with an ERC 20 token?

For the first time, the population is making widespread use of new technologies that allow distances to be bridged despite current restrictions on freedom. Much of this will remain, even when the crisis is over. Because we have realised that it is practical.

This article presents the virtual general meeting and deals with some legal aspects that need to be considered. Afterwards a practical test of BlockState AG is discussed.

A virtual general meeting is a general meeting held exclusively by electronic means. The participants do not meet physically. There is no meeting venue and all interaction takes place exclusively electronically in the virtual space. The draft law provides that such a general meeting can be held if the articles of association so provide and if the board of directors designates an independent proxy in the notice of meeting (Art. 701d Para. 1 E-OR).

According to prevailing doctrine, only virtual participation in a physical general meeting is currently permitted. This means that shareholders can choose whether to participate in the General Meeting by electronic means or physically. Furthermore, it is assumed that the shareholders who are physically present and those who participate electronically can always interact with each other at eye level during the General Meeting, i.e. simultaneously and without delay. In any case, the company must announce a meeting venue in the invitation and organise a suitable room.

The virtual general assembly will continue to be convened in the future in the form chosen in the statutes. Convening by e-mail is possible, provided that the company keeps a register with the e-mail addresses of all shareholders and updates it on an ongoing basis. It is also conceivable that the company uses its own electronic tool for communication with shareholders (e.g. an intranet or similar).

Shareholders will now be able to participate virtually in a general meeting. It will also be possible to appoint a representative to the meeting. The draft provides for the company to appoint an independent proxy at the virtual general meeting. In contrast, there is no provision for votes to be cast in advance by mail, which is still considered inadmissible by the prevailing doctrine.

Nevertheless, the invitation must be accompanied by organizational notes explaining in detail the access, voting function and interactive communication within the General Meeting. These organisational notes must be repeated by the Chairman at the beginning of the General Assembly.

The author personally favours the solution whereby the Board of Directors issues a digital voting card in the form of a token to each individual shareholder. This is very practical for larger groups of shareholders, but also means that shareholders must be instructed and informed accordingly.

The draft law also stipulates that the board of directors has the duty to protect the virtual general meeting from hacker attacks, which for example falsify the voting results. The risk of a technical malfunction cannot be ruled out. However, a test in advance is definitely advisable. A telephone hotline for emergencies is recommended.

Procedure of the meeting & voting

The Annual General Meeting is usually held via video or telephone conference. Shareholders log in at the agreed time. The Board of Directors checks whether the persons logging in are entitled to attend the General Meeting.

The smaller the group of shareholders, the easier it is to vote and count. Voting can take place in various ways: It is conceivable that in a telephone conference, the Board of Directors will call one shareholder after another to cast their vote orally. In the case of video conferences, voting can be done manually or again orally. As soon as the group of shareholders is larger, however, this no longer works in practice – it simply becomes too confusing and voting takes too long. Technical aids must therefore be used.

The token is one of the technical aids that can be used here. For example, the company can use a voting tool which provides each shareholder entering the virtual general meeting with a wallet containing a token provided by the company. These tokens also represent the shareholder’s voting rights at the General Meeting. This token has no other functions. The wallet is also loaded with a little gas for paying any transaction fees. The shareholder can use these tokens to vote at the Annual General Meeting.

Thanks to the COVID-19 regulation 2, stock corporations in Switzerland can already hold virtual general meetings. BlockState AG, based in Zug, took advantage of this opportunity and held its annual general meeting virtually on 8 June 2020. The shares of BlockState AG are tokenised and each shareholder has BlockState Token based on the ERC 20 token standard. These tokens also served as voting identification at the Annual General Meeting and were used for voting purposes. The aim was to enable shareholders to vote directly with their BlockState Token.

Shareholders of BlockState AG had the additional possibility to delegate their votes to a representative or the independent proxy in the run-up to the general meeting, which interestingly enough nobody used.
The participating shareholders and representatives logged into the BlockState Investor Dashboard online and were able to follow the Annual General Meeting via video conference. They had the opportunity to ask questions and submit proposals to the Board of Directors via a chatbox. A practical side-effect of such a tool is that the minutes of the meeting are automatically recorded. 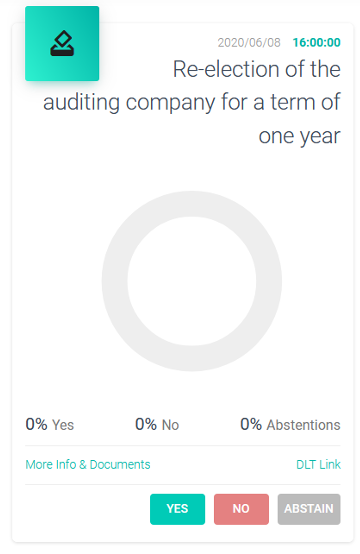 After clicking on the corresponding “YES”, “NO” or “ABSTAIN” button, shareholders were able to complete the transaction using the Metamask Wallet. 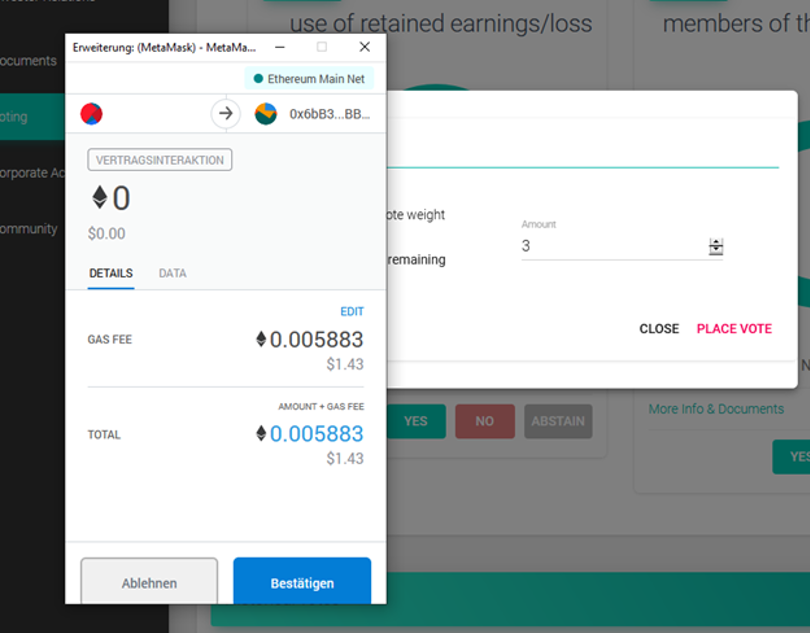 It took about 50 seconds before the results were available. However, this was only possible because shareholders were asked in advance to pay the highest gas fee for the transaction. During the period of the General Meeting, this fee ranged between USD 0.85 and CHF 1.45. Reasonably, all shareholders complied with this.

There were no amendments, but even in this case the company would have been prepared for this, as the formulation and posting of a new voting question in the Investor Dashboard takes about one minute in the voting tool.

After the successful own digital general meeting, BlockState will now go to market with its own voting tool and make virtual meetings possible for other organizations.