Ethereum’s upcoming upgrade (aka merge) is one of the most ambitious and challenging tasks in the blockchain industry, with the potential to revolutionize decentralized networks. By changing consensus, the protocol also creates the politically demanded energy efficiency for a sustainable future.

Ethereum has already undergone significant changes. The protocol, unlike “digital gold,” is regularly updated to meet global demand and improve security and decentralization. The next step in Ethereum’s history became known as Ethereum 2.0 and features a change in the consensus mechanism to proof-of-stake in the first phase. This first phase was launched in December 2020 and is expected to result in a merge of the proof-of-stake blockchain (Beacon Chain) and the main blockchain in mid-2022. An introduction to the myriad implications of the Ethereum Merge.

Ethereum is a shared virtual machine that allows users to manage the global state of the system through decentralized consensus. A user can send and receive transactions between addresses as well as Turing-complete computer programs, known as smart contracts, on the blockchain. These smart contracts can be used for countless applications, with the most popular applications currently found in the world of decentralized finance (DeFi) and non-fungible tokens (NFTs).

The Beacon Chain, which has been operating since late 2020, will act as a consensus layer alongside the Ethereum blockchain, securing the blockchain with proof-of-stake consensus. Similar to traditional proof-of-work systems, the beacon chain will select the node that validates the next block in the chain. However, this decision is not made based on computational power (mining), but based on the deposited ether (staking). The Beacon Chain then coordinates the inclusion of the validated blocks and finally the distribution of the chain in the Ethereum blockchain.

The merger of the Beacon Chain with Ethereum

The Beacon Chain was originally shipped separately from the Ethereum blockchain, as mentioned earlier. The Ethereum mainnet continues to be secured by Proof-of-Work, while the Beacon Chain runs in parallel with Proof-of-Stake. Merge refers to the point at which these two systems are finally merged. The Ethereum Foundation often uses the comparison of a spaceship that is not quite ready for interstellar travel. With the Beacon Chain, the community has built a new engine and a hardened hull. When the time comes, the current ship will dock with the new system and merge into a ship that can travel several light years and conquer the universe.

According to current estimates, the Ethereum blockchain will “merge” with the Beacon Chain in July 2022 and become its own “shard” using the resource-efficient Proof-of-Stake instead of Proof-of-Work. The merge will thus allow the Ethereum network to execute smart contracts in the proof-of-stake system. Since all of Ethereum’s history and current state must be adopted in order for the transition to be smooth for all Ethereum users, the developers are proceeding with extreme care. In the event of a significant failure, hundreds of billions in user funds would be at risk.

The London Hard Fork, which introduced a handful of Ethereum Improvement Proposals (EIPs), represented a substantial upgrade a year ago. One proposal in particular, EIP-1559, caused controversy due to the shift in fee structures charged by miners and paid by users. A built-in “burn mechanism” wipes out a portion of the Ether used to pay transaction fees. A key benefit of the July 2021 London hard fork was the deflationary effect of the ETH burn mechanism. The destruction of a certain percentage of Ether continuously takes coins out of circulation, which should increase the scarcity and value of the asset.

In January 2022, Ethereum posted its first consecutive weeks of deflationary issuance amid rising network activity. Since the launch of EIP-1559, more than 2 million Ether have been burned, equivalent to around $7 billion. As the Ethereum merge means an end to block rewards for PoW miners, total issuance of all Ether will also drop by around 4.3% to 0.43% per year, to be replaced by staking rewards. Combined with the daily destruction of several thousand Ether, the merge is expected to promote ETH to a consistently deflationary asset.

A significant criticism of the current leading blockchain systems such as Bitcoin and Ethereum (before the merge) is the high energy consumption. A significant amount of energy is expended to create new units and confirm transactions (mining). Anarchic blockchains like Bitcoin allow anyone to participate in block creation. To make it expensive and block restructuring (51% attacks) impossible, the proof-of-work algorithm was intentionally integrated. An attacker must expend real economic resources to succeed. Despite a high percentage of renewable energy sources, this leads to significant energy consumption.

Proof-of-stake systems do not use computing power (mining) to prevent attacks. Instead, nodes must deposit their own assets (staking), which can be stripped from the network in the event of an attack. This creates financial incentives for all network participants to behave honestly and keep attackers away. Computing power is thus no longer a barrier. In Ethereum’s case, this shift from proof-of-work to proof-of-stake results in over 99% reduction in energy consumption. In summary, the merge brings various benefits to Ethereum as a network and Ether as an asset: 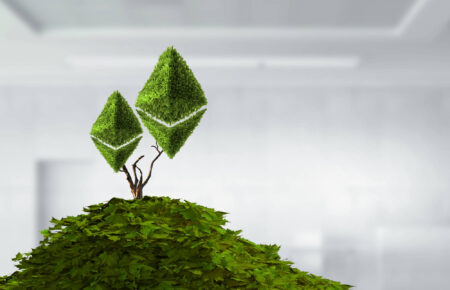