A turbulent year is coming to an end. The fields of blockchain technology and digital currencies once again came to a broader attention in 2020. The most important developments of the past year in a compact annual review 2020.

The recent gains in Bitcoin and other cryptocurrencies are no coincidence. The industry has ultimately evolved in the face of further clarity on legal certainty. As early as 2019, banks in Germany received formal authorization to hold digital assets as custodians for their customers. This was followed in July 2020 by the U.S. Office of the Comptroller of the Currency (OCC), which allowed licensed banks nationwide to offer custody services for cryptocurrencies. Since then, major banks such as J.P. Morgan, as well as innovative institutions, have moved further into the field. While expanding their service offerings, they have also made initial public statements in favor of digital assets such as Bitcoin. However, Bitcoin&Co. has not only become more accessible as a digital store of value. With the market entry of Paypal a significant change has also taken place in terms of payment methods.

In monetary policy terms, 2020 was exceptional. With COVID, the cracks in the foundation of an over-indebted global economy became clearly visible. Central banks intervened with a massive expansion of the money supply as well as a new type of open market policy. Both courses of action which further brought CBDCs and cryptocurrencies into focus, albeit from different angles. Representatives of central banks are flirting with new possibilities that an introduction of digital central bank currencies brings with it and register a threat to the global financial system not in Bitcoin, but in private stablecoins.

Switzerland, with its progressive legislation, has always been considered an important location for the development of the blockchain ecosystem. The merging of the traditional and digital financial worlds has been particularly evident in this country during the year. Innovative companies are driving the development and are visibly enlarging the scope of services around digital assets. The canton of Zug is also at the forefront. In 2020, Zug became the first Swiss canton to offer the option of paying tax debts with cryptocurrencies. It is not a coincidence that this is the place where the Crypto Valley, the center of Switzerland’s blockchain ecosystem, emerged.

Overall, the foundation around cryptocurrencies has strengthened massively in 2020. In addition to widespread adoption, a growing ecosystem with an accompanying broader range of services around digital assets has been observed. However, the remarkable progress in 2020 was not linear. COVID created fundamental challenges in addition to dislocations in the markets.

COVID caused massive disruptions in global markets, the real economy and social life. The pandemic reached chaotic proportions for the first time in March. Governments around the world responded with tough measures to the covid pandemic, which had been underestimated for the time being. Complete lockdowns, accompanying unemployment, overburdened hospitals and never-before-seen expansionary monetary policies by central banks were direct results. On March 12, a shock in global markets followed. Equity indices, gold, but also Bitcoin were hit by massive price corrections. The latter lost almost 50% of its value within one day and lost its previously propagated uncorrelated nature to other “risk assets” by this time. Consequently, the resilience of the largest cryptocurrency to crises was denied. At this moment, hardly anyone suspected that Bitcoin will appreciate 655% from this point until the end of the year, and stand out as the “best-performing asset” of 2020.

Separate from the Corona crisis, Libra, Facebook’s stablecoin project has had problems with regulators since its original announcement. Consequently, its members such as Visa, Mastercard and eBay pulled out of the project as early as the previous year. In April, the Libra Association finally published a new whitepaper and submitted an application to the Swiss Financial Market Supervisory Authority (FINMA).

In December, the organization also announced a name change. The Libra project is now called “Diem” (Latin for day). With this, the concept wants to distance itself at least partially from Facebook, ultimately in order to get back in touch with regulators. According to Reuters, the Diem Association plans to launch its first stablecoin in January 2021, subject to FINMA approval.

Bitcoin is designed as a limited digital asset, similar to silver or gold. The digital currency has predefined limits in terms of supply and inflation. Due to so-called “halvings”, fewer Bitcoins come into circulation and the supply becomes tighter. The rate of issuance, or the rate of inflation, is gradually reduced. Newly created Bitcoins are distributed as remuneration to the miners, who contribute computing power to secure the blockchain system. The corresponding reward halves every 4 years, hence the term “halving”. In 2020, for the third time, that supply tightening was carried out according to the Bitcoin protocol. In the medium term, a reduction in the supply of a limited good leads to price increases when demand remains constant. Historically, previous “halvings” have driven the bitcoin price up in the subsequent months in both occasions. The third halving in 2020 also followed this pattern. Scarcity increases its value. One approach that brings this thesis to its conclusion is the stock-to-flow model.

The halving combined with previously unseen monetary expansion as a response by central banks to the emerging economic crisis, drew more attention to Bitcoin and later would lead to a rethinking of how individual companies manage their financial resources. The “hardest money” label was the catalyst for 2020, with prominent investors pointing to the unique characteristics of the cryptocurrency and its potential in an environment of expansionary monetary policy.

The field recorded impressive growth in the past year, reaching a new record high in Q4 with nearly USD 15 billion in cryptocurrencies collateralized. 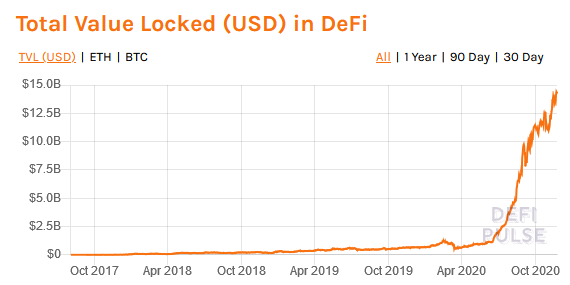 Back in June, the Bank for International Settlements (BIS) expressed its views on CBDCs. The BIS says it favors central bank innovations aimed at simplifying the provision of payment services, reducing transaction costs and improving quality. In one study, their findings concluded that more than 80% of central banks are working on CBDC pilot projects. This includes the European Central Bank (ECB), which is strongly in favor of a digital euro and has initiated initial procedures.

This momentum can be seen around the world. In a meeting between G7 finance ministers, the FED, the International Monetary Fund (IMF) and the World Bank, CBDCs and private stablecoins were a key topic. While decentralized cryptocurrencies like Bitcoin were not perceived as a threat, private stablecoin projects like Diem came under fire.

New Kids on the Blockchain

In 2020, the interoperability protocol Polkadot went live. The Ethereum competitor had a roaring launch and quickly established itself in the top 10 coins by market capitalization. The project seeks to connect different blockchains via “sidechains” to enable higher specialization and lower transaction costs within the ecosystem. For the execution of “smart contracts”, there is a need for data from the “real world”. In the blockchain world, such services are called “oracles.” With Chainlink, an “Oracle service provider” also reached the top 10.

In August, an announcement by US software vendor MicroStrategy generated a lot of attention. One of the largest business intelligence companies announced that it had acquired 21,454 Bitcoins for $250 million as part of its new investment strategy. After considering various assets, the company came to the conclusion that Bitcoin (BTC) would be the best long-term investment. The company backed up the decision in December by issuing a convertible bond in the amount of USD 550 million, with the sole purpose of acquiring more Bitcoins.

Shortly after, Square, a financial services company, also announced that it would invest some of its liquid assets in Bitcoin. Although it was “only” 1% of their total assets, it highlighted an institutional tendency.

In early December, MassMutual became the first insurance company announcing it had invested in Bitcoin for its mutual fund.

The rapid increase in assets under management at the world’s largest digital asset manager, Grayscale Investments, speaks the same language. The exchange-listed trust provider saw its largest quarterly inflow ever, with more than $1 billion in new investments. This marks the third record quarter in a row. The New York-based investment firm, meanwhile, manages nearly six billion USD in digital assets, according to its latest published quarterly report. The assets are spread across ten investment products designed to give institutional investors access to the crypto market.

Even at the beginning of the Corona Crisis, it was not clear how the lockdown would affect Crypto Valley and the blockchain companies based here. The CV VC Top 50 Report, released in September, showed that the crypto region has experienced growth even during the Corona crisis. The number of companies in Switzerland and Liechtenstein working on blockchain technology had risen to 919. By the end of 2019, the number was 842. Similarly, the number of employees has increased from 4400 to 4780 in the same period. Nevertheless, substantial amounts of money flowed into the 50 largest companies in the Crypto Valley.

Bitcoin is penetrating traditional financial areas and is increasingly perceived as an investment object in 2020. As a digital means of payment, the cryptocurrency can be used sporadically, but there still is a lack of applications for the broad public. Paypal countered this shortcoming in October. The California-based company has 346 million active account relationships globally and processed $222 billion in payments in the second quarter. More than 300 million consumers and merchants are connected to the Paypal platform in more than 200 global markets. Starting in 2021, customers will be able to use their cryptocurrency holdings to make payments at PayPal’s 26 million merchants. PayPal’s acceptance of cryptocurrencies is a big deal and will significantly drive widespread adoption.

The second largest public blockchain network, Ethereum, has undergone a remarkable evolution. The network represents a specialized, decentralized and globally accessible platform for distributed computing. The smart contract platform is growing steadily and has already been able to reinvent itself a few times in its young history. 2020 represents a special year for the platform. The first phase of the implementation of Ethereum 2.0 was launched in December. The update, which will last for several months, aims to ensure the increasing growth of the blockchain. Current scalability is limited by the Proof of Work (PoW) consensus algorithm and is expected to become more efficient by switching to Proof of Stake (PoS).

The regulatory framework for distributed ledger technology (DLT) in Switzerland has been in the works for years. The adaptation of the Swiss law entered its final phase in December with overwhelming political support.

Switzerland has been developing a regulatory framework for DLTs since 2014, following the principle of “technology neutrality.” Consequently, Switzerland has pragmatically adapted existing principles-based laws in response to technological innovation. By 2021, this legal framework will provide Switzerland with the most comprehensive and well-articulated blockchain legislation worldwide.

The year got off with an extremely turbulent start. What initially looked like a disastrous year for cryptocurrencies turned into a new bull market. On November 30, Bitcoin broke through its 2017 all-time high of $20,000. Since then, the Bitcoin price has been exploring unseen territories near the $30,000 mark. 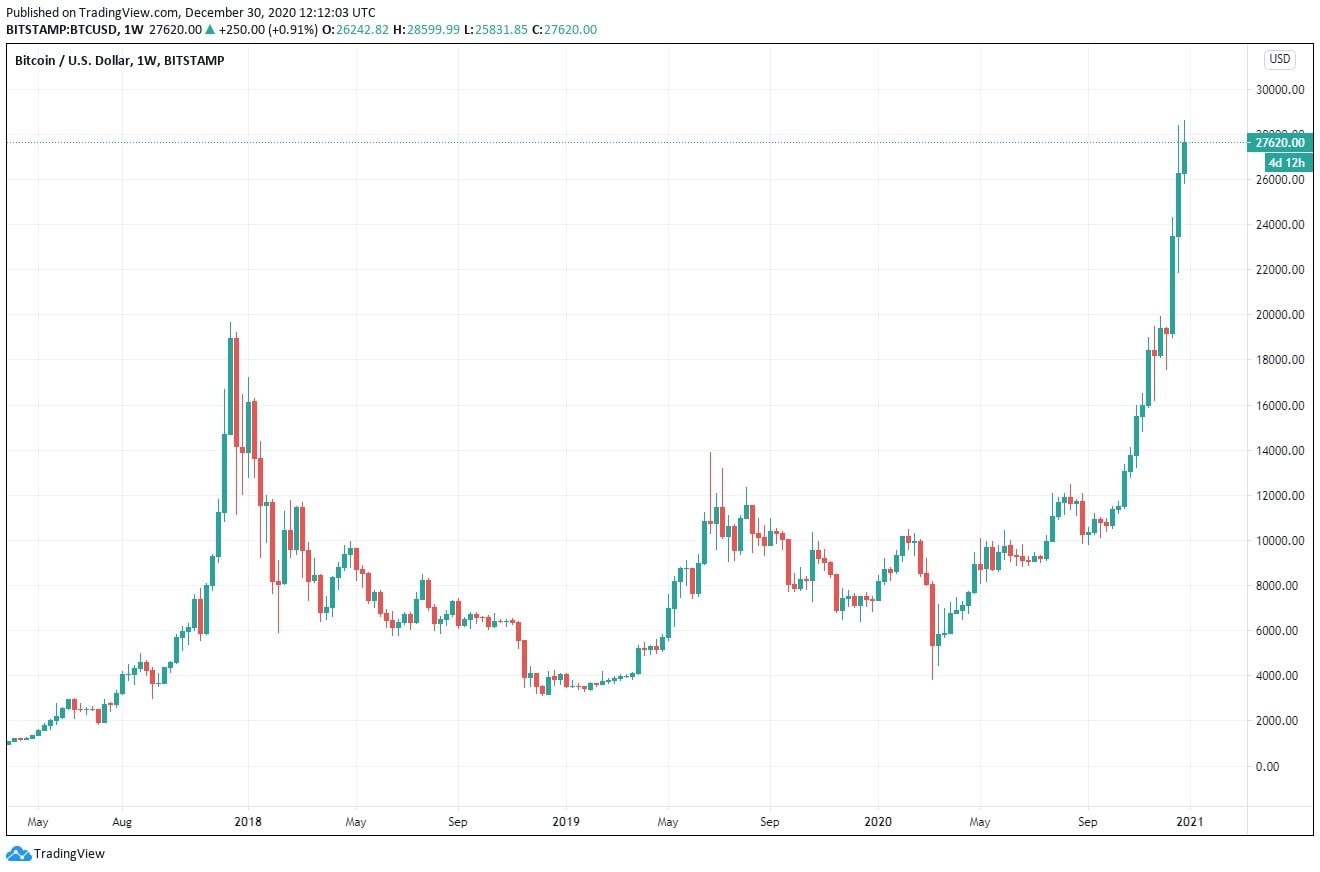 However, the year did not end rosy for all crypto projects. Ripple, the company behind the previously third largest cryptocurrency XRP, was indicted by the United States Securities and Exchange Commission (SEC) just before Christmas. The FinTech firm is accused of selling unlicensed securities in the form of its XRP tokens. This led to quite a few delistings as well as exclusion from listed products.